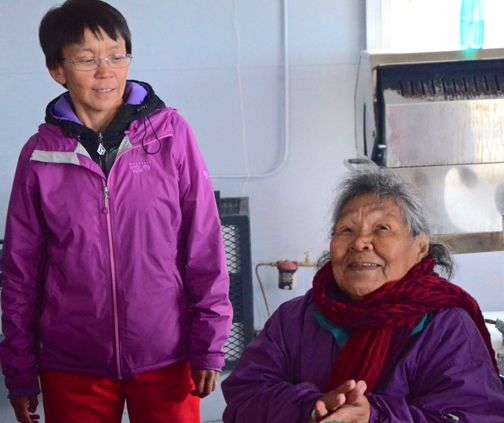 Alacie Joamie explains, with English translation from Leesee Papatsie, left, how to light a qulliq and why the traditional oil lamp was so important to Inuit survival. (PHOTO BY DAVID MURPHY) 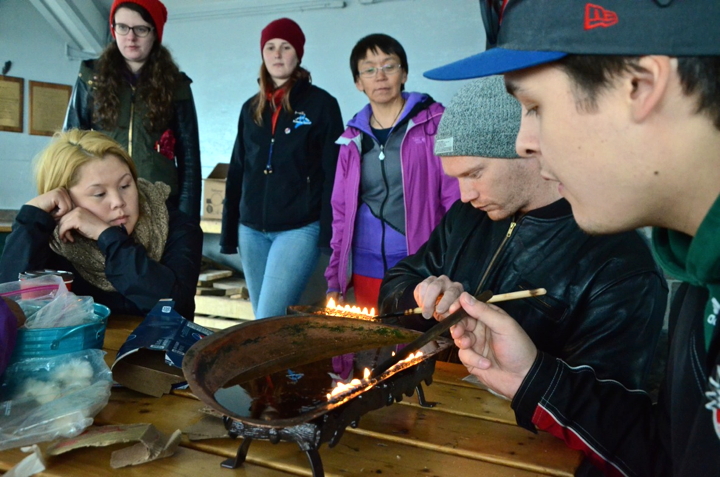 Devon Hoover-Ionson and Robert Comeau (right) maintain a qulliq at a workshop July 7 in Iqaluit. (PHOTO BY DAVID MURPHY)

A qulliq lighting workshop at Sylvia Grinnell Territorial Park in Iqaluit starts with a handful of people struggling to start a fire in the park’s chalet fireplace.

“Does anyone else want to try?” asks one cold person at the workshop, attempting to open the chimney flue.

A flame finally catches and a haze of smoke fills the chalet and the heat eventually warms the 20 people gathered here July 7 to learn from elder Alacie Joamie how to light and tend to a traditional oil lamp.

The event is part of a series of free summer workshops at the park offered by the Government of Nunavut’s environment department.

Joamie begins the lesson by listing simple ingredients necessary for lighting a qulliq: store-bought oil, a stick and some Arctic willow as tinder — she prefers the willow to Arctic cotton.

She mixes the fuel ingredients together and lights it and these glow for the better part of two hours.

Unfortunately, the same can’t be said for the fire in the fireplace.

“How’s that fire looking behind,” one guy smirks, watching Joamie maintain strong flames in the qulliq while the fireplace fire sputters and wheezes.

The qulliq Joamie lights can last hours — it can even last overnight, she said.

“We survived because of the qulliq,” Joamie said in Inuktitut, with English translation from Leesee Papatsie.

Things were different back in Joamie’s day. The qulliq was usually made from stone, and the oil came from animal fat.

“It was the most reliable way to make heat while hunting and camping,” Joamie said.

Joamie started lighting qulliqs when she was seven years old. And she’s done a lot, with a qulliq burning in the background, from then on.

She says she’s given birth to three children in iglus while qulliqs were lit — and none of her children have been terribly sick throughout their lives. She says it’s due to the qulliq, and better air circulation back then.

Qulliqs were used for drying animal skins, cooking, keeping warm and providing light. And Joamie still uses a qulliq to make the best tea and bannock.

In fact, Joamie was miffed that nobody brought tea and bannock supplies this Tuesday afternoon.

The traditional qulliq has now been modernized. The lamp Joamie tends today is metal and the fuel used in this workshop is Crisco canola oil.

Qulliqs are also used symbolically now, too. You’ll often see them lit at opening ceremonies and conferences, a practice Joamie started noticing in the 1970s as a means to honour and preserve Inuit culture.

Papatsie, who is helping to coordinate the summer workshop series, said hearing elders tell stories from before the territory was formed is special.

“To see how much change they have gone through and how the Inuit have survived on the harsh environment,” Papatsie said.

Sharing culture in the outdoors is one of Papatsie’s goals for the new “Learning at the park” workshops to be held every Tuesday from 1 p.m. to 3 p.m. at Sylvia Grinnell Territorial Park.

“We’re trying to promote people’s connection to the outdoors,” she said.

“Find the ways to connect the people with Inuit culture and technology, and about anything,” Papatsie said.

That “anything” ranges from setting up tents to fishing, GPS navigation and traditional plant uses.

Everyone aged 12 and up is welcome to attend, and it’s an idea that Papatsie hopes will grow.

“One of the things that makes this work well is we’re using resources in the community. We’re not bringing anyone from the south, so we’re using what we have,” she said.

If all goes well, the workshop series might continue next summer.

“I’m hoping it will. And I’m hoping other communities will go, ‘Oh, we can do this as well.’”

The July 7 workshop inspired at least one person.

Iqaluit-born Robert Comeau, 20, who studies at Carleton University, said he got “chills” while Joamie was speaking about the purpose of the qulliq.

“Having spent 10 years in an urban area, it’s hard to connect with your culture like that,” Comeau said.

“So when I go back down, I’m definitely going to try to get my hands on a qulliq.”

The “Learning in the Park” Tuesday workshops last until Aug. 18. Click here for a full schedule.

Events will occur rain or shine, either on the land or in the chalet. 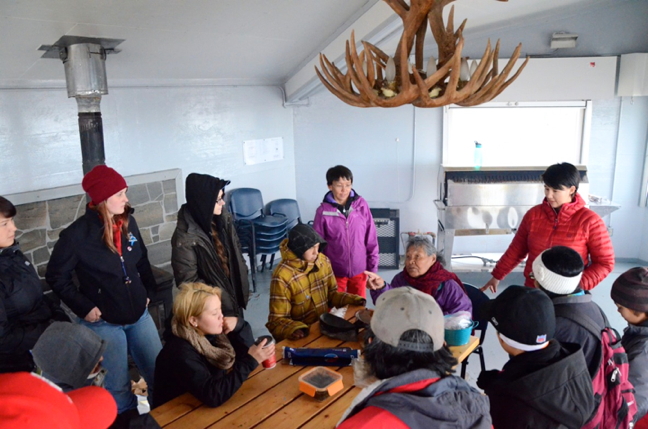