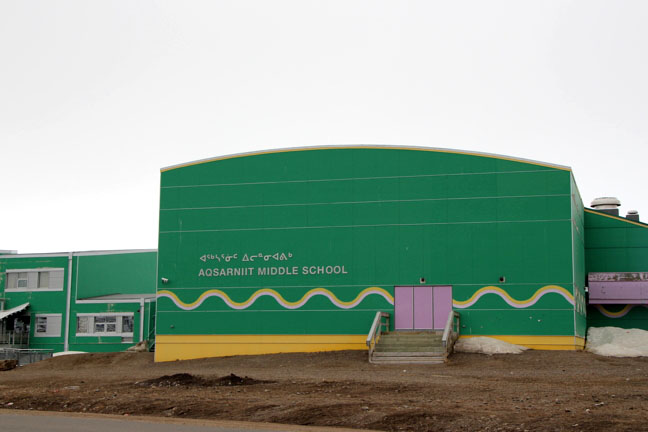 Another case of attempted arson has occurred at a Nunavut school—this time in Iqaluit.

Three people were seen attempting to set Aqsarniit Middle School on fire at about 10 p.m. on Monday, March 19, the RCMP said in a release on March 22.

“Three individuals were observed running away from Aqsarniit Middle School, just as a fire was observed on the side of the school building,” Cpl. Henry Coman said in the release.

“A witness was able to extinguish the fire, which limited the damage. The Iqaluit fire department was not required.”

Just last week, somebody set a school bus on fire in Pangnirtung. The same person also tried to set Alookie Elementary School on fire and tried to set fire to a garbage bin beside Attagoyuk High School.

This Iqaluit fire marks the fourth case of arson at a Nunavut school since 2015, when Peter Pitseolak School in Cape Dorset was destroyed in a fire.

The following year, a youth in Kugaaruk was charged with arson when the only school in the Kitikmeot community of about 900 people burned to the ground overnight.

“These buildings are precious because not only are they schools where our youth get an education, they are also places for our community to gather for concerts, sports events, and for other spiritual and cultural events,” Coman said.

“The loss of these buildings is devastating to our communities.”

Nunavut Finance Minister David Akeeagok said March 19 in the legislative assembly that the Government of Nunavut’s insurance deductible for schools has jumped from $10 million to $20 million since the fire in Kugaaruk.

That means that if another school were to be destroyed by fire, the GN would have to pay the first $20 million of its replacement cost.

The RCMP ask Iqaluit residents for any information they might have about the attempted arson at Aqsarniit Middle School.

If you have information you can contact the Iqaluit RCMP or send an anonymous tip to Crime Stoppers by calling 1-800-222-8477 (TIPS).

You can also submit a secure tip online at www.nwtnutips.com or by texting a message to ‘NWTNUTIPS’ and your message to 274637(CRIMES).