Keep HFO out of the Arctic, environmental alliance urges Fednav 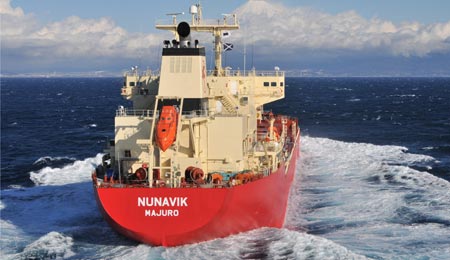 The Clean Arctic Alliance wants Fednav, the Canadian shipping giant, and its customers to keep heavy fuel oil out of the Arctic.

The alliance, a coalition of 18 NGOs working to end the use of heavy fuel oil as marine fuel in Arctic waters, is responding to news that an Australian mining company, Ironbark Zinc, plans to charter the world’s largest icebreaking bulk carrier, Fednav’s 188-metre Nunavik, for its zinc mining operations in northern Greenland.

“The Clean Arctic Alliance challenges Fednav and its customers, like Ironbark Zinc, to commit to never using the world’s dirtiest fuel— heavy fuel oil (HFO)—to power ships like the Nunavik when they sail in Arctic waters,” said Dr. Sean Prior, the lead advisor for the Clean Arctic Alliance, in an Aug. 23 news release.

“Using heavy fuel oil to power shipping in the Arctic not only increases the risk of oil spills, but also generates emissions of black carbon, which exacerbate the melting of both sea and glacier ice in the Arctic region. Fednav—and its customers, like Ironbark Zinc—could lead a vanguard of companies shipping goods that move towards clean and renewable forms of propulsion for shipping worldwide.”

Last April, the International Maritime Organization’s Marine Environment Protection Committee agreed to move forward with considering an Arctic ban on the use and carriage of HFO.

About 75 per cent of the marine fuel currently carried in the Arctic is HFO, and shippers have said the cost of switching to cleaner fuel would be carried by their customers.

In April, the IMO directed a subcommittee to develop a ban on HFO use and carriage for use by ships in the Arctic “on the basis of an assessment of the impacts” and “on an appropriate timescale.”

“It is time for international shipping companies to clean up their act by moving to cleaner fuels, while operating in sensitive and vulnerable regions of the world—for the sake of the Arctic, its people, its wildlife and, indeed, for the whole planet,” Prior said.

Besides the dangers from an HFO spill, the fuel is also a greater source of harmful emissions of air pollutants, such as sulphur oxide, and particulate matter, including black carbon, or soot, which is a “short-term climate forcer.”

When emitted and deposited on Arctic snow or ice, the climate-warming effect of black carbon is up to five times greater than when emitted at lower latitudes, says a recent report on emissions and fuel use in global shipping.

When the tiny particles of black soot become suspended in the atmosphere, they radiate heat back to the Earth.

Researchers have estimated that in the Arctic, black carbon magnifies warming more than in other regions when it falls on ice and snow, magnifying heat like a black T-shirt on a sunny day.

Because of this, black carbon is believed to be responsible for at least 30 per cent of warming in the Arctic.