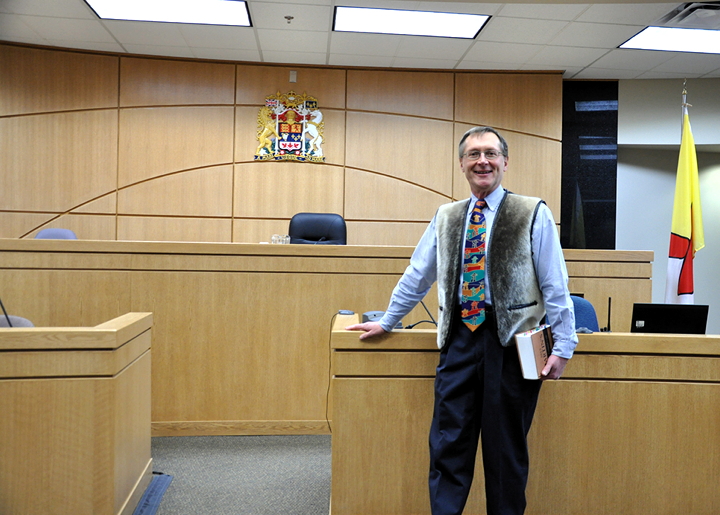 Paul Bychok poses in an Iqaluit courtroom wearing his trademark sealskin vest. Bychok bought the custom-made vest from Kiluk craft shop in Arviat in 2008. Since then, sealskin vests have been incorporated into the list of appropriate attire for lawyers to wear in a Nunavut courtroom, Bychok said. “I was the pioneer of that,” he said. “I’ll take credit for that.” (PHOTO BY THOMAS ROHNER)

Paul Bychok, set to retire from a 30-year career in public service April 2, sits inside Iqaluit’s Grind and Brew Café a week before his retirement, doing what those who know him have come to expect: telling stories — with passion, intelligence, humour and empathy.

Between sips of coffee and passing greetings to friends and acquaintances, Bychok, who has worked as a Crown prosecutor in Nunavut for a dozen years, explains his family’s reaction shortly after making Iqaluit their home in December 2003.

“It was a very quick realization that we had come to another culture’s land,” Bychok said.

Back then, Bychok attended the annual Christmas games at Iqaluit’s Anglican Parish Hall with his wife, Linda Ham, and his two daughters, Kira and Anika, then aged seven and nine.

It was obvious that, of the 200 or 300 participants, his family counted among only a dozen or so non-Inuit.

“There we were, in a totally different society, and yet we were still in Canada, were still at home,” Bychok said, smiling. “We could’ve been anywhere else in the world, because we were not at home.”

Their experiences after that, and the friends they’ve made, have changed his family forever.

“Linda and I feel really privileged and lucky that we were able to bring up our daughters in Nunavut. They had an exposure to a culture and a set of traditions which, at their very essence, are not only healthy but life-giving,” he said.

But Bychok’s privilege came with a heavy responsibility as a Crown prosecutor.

Until Inuit came in off the land, Bychok said, they had their own way of dealing with the same issues that are now addressed at the criminal court.

“So to be really responsive and responsible, it was incumbent on me to try to temper and fashion whatever I was doing on behalf of the Crown, to make it understandable to Inuit, and to try to incorporate whatever traditional mechanisms might’ve been used to deal with the same kinds of issues.”

To that end, Bychok relied heavily on Inuit witness co-ordinators employed by the Crown. One in particular, Elisapee Angnatsiak, was indispensible over the last dozen years.

Angnatsiak, who recently passed away after more than 20 years as a federal public servant, served as a cultural bridge between Bychok and the Inuit he served.

As a personal friend and colleague, Angnatsiak embodied the best of Nunavut to Bychok: “She never sought praise or attention. She went about her job quietly. She was extremely conscientious and hardworking.”

“If you don’t have that type of relationship, you’re not going to survive doing what we do up here very long,” Bychok said.

“And she wasn’t in the slightest way resentful that here I was, another Qallunaat, flying in and out of communities.”

Angnatsiak travelled with Bychok on his first circuit court in 2004. Speaking at his retirement dinner March 14 at Iqaluit’s Arctic Hotel, Bychok said that trip neatly summed up his career in Nunavut.

For example, after getting everything organized for 10 a.m. on the first day of court in Arviat, court staff waited until nearly 11 a.m. before the first person scheduled on the docket showed up.

“That was my first experience with ‘Nunavut time’,” Bychok told the 35 or so people who attended the dinner, including local lawyers and judges.

After leaving Arviat for Repulse Bay, a blizzard hit, which made for an interesting flight.

“The plane somehow manages to hit the tarmac, but then skids sideways all the way down the runway,” Bychok laughed.

But Bychok has never shied away from the complexities and challenges of Nunavut life.

With Angnatsiak’s help, Bychok prosecuted “at least a half dozen” homicide cases in the territory, including high profile cases like Silas Ammaklak, Bruce Kayaitok and Chris Bishop.

Colleagues who spoke at Bychok’s retirement dinner commented on the man’s dedication to supporting and consoling families and witnesses in each case.

He spent his first years as a Crown prosecutor in Nova Scotia and in the beginning, was embedded with the RCMP as a prosecutor in Operation Hope — a massive investigation into allegations of systemic sexual abuse at Nova Scotia’s youth detention facilities from the 1950s to the 1980s.

At the same time, Bychok prosecuted Cesar Lalo, whom he described as “Nova Scotia’s Ed Horne,” referring to the notorious pedophile teacher who taught in Baffin and Nunavik in the 1970s and 1980s.

But after three years with Operation Hope, Bychok started showing signs of vicarious trauma, which forced him to quit.

Careers in foreign service, as a diplomat, and in teaching tempted Bychok, but eventually he settled on becoming a prosecutor.

“I have always believed passionately in what I do,” Bychok said in a speech at his retirement dinner.

And that passion led him to push those around him: colleagues, police, defence counsel, even judges. That hasn’t changed as he approaches retirement.

“The criminal justice system is struggling along and could use a re-think,” Bychok said at the Grind and Brew.

Court dockets are dominated by domestic and sexual violence, he added, the vast majority of which are alcohol-fuelled.

That’s hasn’t changed over the past dozen years, he said.

The unitary court system in Nunavut — combining the territorial and superior court — has not worked, he said.

It’s overloaded. A robust Justice of the Peace system could help by dealing with lesser criminal charges, Bychok said.

The territory also needs a coordinated domestic violence strategy “that recognizes the importance of early resolution,” as well as substance abuse treatment facilities, mental health workers and safe houses in each community.

Wellness courts is an idea whose time in Nunavut has come, he added, and the revitalization of local justice committees could bring traditional Inuit knowledge and values in closer contact with the justice system.

But for local justice committees to flourish, community leaders must take on more responsibility, he said.

“People who have the experience and knowledge and care about their communities — and our hamlets are full of people like that — they need to force themselves out of their own comfort zones and to take on leadership responsibilities.”

Though he’s still full of ideas, Bychok appears ready for a break.

“The two emotions I’m feeling right now are satisfaction and relief,” he said.

“Satisfaction because I did the best job I could. No matter what the results may have been, I did try to be fair and to do my best. And relief because being a career prosecutor is not for the faint-hearted.”

Bychok said he plans to stay in Iqaluit for at least the next few years, and to be active in the community — just as he’s always been.

“But I need a good long rest. For the next six months or so, I’m going to be focusing on taking care of myself.” 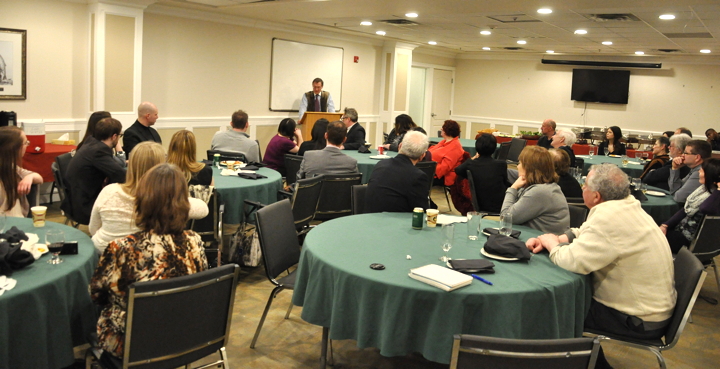 About 35 people attended a retirement dinner for Paul Bychok (centre, at podium) at Iqaluit’s Arctic Hotel March 14. Bychok is retiring after nearly 12 years as a Nunavut Crown prosecutor. (PHOTO BY THOMAS ROHNER)