“There’s just too many bears around Arviat right now” 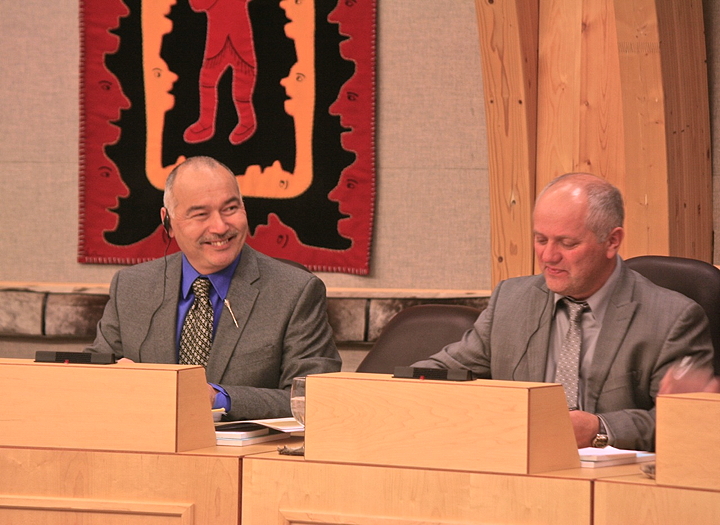 Joe Savikataaq, MLA for Arviat South, left, says it’s time for the government to increase the polar bear harvest quota in his region, where the bears have appeared in unusually high numbers this fall. Hudson Bay MLA Allan Rumbolt, right, says a recent decrease in his region’s quota has affected hunters’ livelihoods. (PHOTO BY PETER VARGA)

Ever-increasing polar bear traffic may be threatening to the residents of Arviat and disappointing for Halloween trick-or-treaters, but that won’t translate into a bigger harvest for hunters in that Kivalliq community this year.

Any hope of an increase to polar bear hunt quotas in Arviat and neighbouring lands, stretching from the Kivalliq region to northern Manitoba, will have to wait until next year, Nunavut’s minister of environment, Johnny Mike, said Oct. 23.

That’s the answer that Joe Savikataaq, MLA for Arviat South, got when he renewed his call for an increase in quotas for the polar bear hunt on the western coast of Hudson Bay.

“Mr. Speaker, it is unreasonable to expect the residents of Arviat to spend months on end in their houses, and afraid for the safety of their lives and properties,” Savikataaq said in his member’s statement.

“Arviat has previously had to use all of its polar bear tags for defense of life and property kills,” he said. “There’s just too many bears around Arviat right now.”

The quota for polar bears in the Western Hudson Bay region, which covers most of Nunavut’s Hudson Bay coastline and northern Manitoba, is 24 polar bears per year.

Savikataaq is calling for 45.

In response to Savikataaq, Mike said the Nunavut Wildlife Management Board will decide on the new quotas some time after January 2015.

Until then, the NWMB is collecting submissions from government agencies and the public. Some of that information will come from a public hearing, Dec. 2 to Dec. 3, in Rankin Inlet.

The Government of Nunavut will submit a Nunavut polar bear management plan to the board in January, Mike said.

Savikataaq said polar bear hunting is important to the livelihood of many Arviat residents. Killing a bear in self-defense is a different matter, which the hamlet wants to avoid.

“I would like to emphasize that the hunting of a polar bear is a very resourceful, and therefore important, practice in the community,” Savikataaq told the assembly.

“In a territory where food security and employment are a daily struggle for many households, harvesting a polar bear can provide a significant amount of meat, fur and income to a hunter’s family.”

The hamlet has taken various measures in recent years to keep from having to kill polar bears in defense of life and property.

Defense kills are included in the quota — but these take away from a hunter’s deliberate effort to harvest an animal.

“Inuit do not take pride in having to kill a problem polar bear,” Savikataaq said. “When a polar bear is killed in defense, it is not by the hunter’s choice, it’s by necessity.”

Mike agreed, and acknowledged the community’s efforts to deter polar bears from entering the community. These include diversionary feeding stations, electric fencing and traps that don’t injure the animal.

Arviammiut “who work with polar bear deterrence have been helping to keep the people safe, which I am very happy to see,” the minister said.

Arviat is not the only community to disagree with polar bear quotas. Hudson Bay MLA Allan Rumbolt, who represents Sanikiluaq, said a recent agreement to decrease his region’s yearly take is affecting hunters’ livelihoods.

Environment Canada announced Oct. 10 that aboriginal organizations, wildlife management boards and hunters in Nunavut, Nunavik and Cree regions in Ontario and Quebec agreed to decrease the annual southern Hudson Bay subpopulation quota to 45 from 60. The change brought Sanikiluaq’s portion down to 20 polar bears per year, from 25.

That decrease has translated into a loss of income to hunters who benefit from the sale of polar bear pelts, Rumbolt said. The MLA then asked Mike what Nunavut’s department of environment would do “to address the loss of income” to Sanikiluaq hunters and the community’s hunters and trappers organization.

Mike replied that the territorial government could not consider compensation, because the decision on harvest levels is a wildlife-conservation issue, not an economic one.