Majority of relationships in Nunavut are common-law: StatsCan

And three-quarters of all Nunavut households are multi-generational 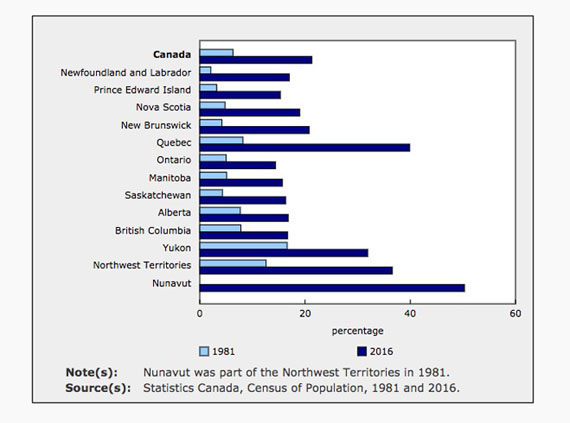 This graph shows the high proportion of common-law unions in Nunavut—50.3 per cent—compared with other jurisdictions. (STATISTICS CANADA)

Statistics Canada revealed Aug. 2 that in Nunavut, common-law unions accounted for 50.3 per cent of the territory’s couples in 2016—and that you’re more than twice as likely to live common-law in Nunavut than elsewhere in Canada.

Also, StatsCan found the practice of living common-law has increased more quickly in Nunavut than in any other province or territory.

The rate at which common-law unions are formed increased by 4.7 per cent in Nunavut since 2011, compared with a national average increase of 1.4 per cent.

Common-law couples in Nunavut also have more children together than couples elsewhere in the country, StatsCan found.

These new figures come from an Aug. 2 release by StatsCan on its 2016 census results—focusing on families, households, marital status, and language and is the third series of data released following last year’s national head count.

Among other things, the report did find that while married couples still represent a majority of conjugal unions in Canada, “common-law unions are becoming more frequent in every province and territory.”

More than one in five, or 21.3 per cent, of Canadian couples now live in common-law unions, which is a rate that is three times more than in the 1981 census, when common-law relationships were counted for the first time.

Nunavut’s high rate of common-law unions is followed by Quebec, the Northwest Territories and Yukon, where common-law couples range between 30 and 40 per cent of all couples.

These are all jurisdictions where the prevalence of common-law unions is much greater than the national average for the rest of Canada, which is 15.7 per cent, excluding Quebec and the territories.

When common-law living was measured in 1981, Nunavut was still a part of the NWT. Then, the proportion of common-law couples in the territory stood at 12.6 per cent.

StatsCan also looked at multi-generational households—families with at least three generations of the same family living under one roof.

These were the fastest growing type of household counted in the 2016 census.

Currently 6.3 per cent of Canadians, or 2.2 million people, live in multi-generational households, which is a 37.5 per cent increase from 2001.

“This type of living arrangement is more common among Aboriginal and immigrant populations, which account for a growing share of Canada’s population,” said the report.

And, “the higher number of multigenerational households may also be related to housing needs and the high cost of living in some regions of the country,” said the report.

With an 85-per-cent Inuit population, high living costs and a territorial housing crisis, it’s no surprise that in Nunavut 12.2 per cent, or roughly one in eight households, are multi-generational.