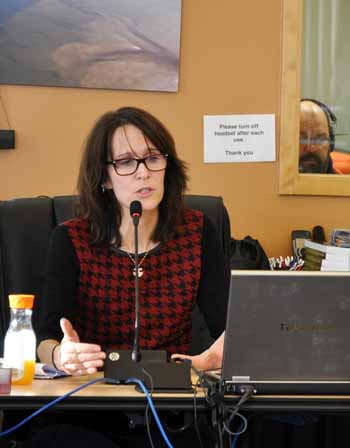 KUUJJUAQ -— Nunavik offenders are used to travelling south to be tried, sentenced and incarcerated.

Even those whose cases are processed within the region by the province’s travelling court circuit still deal with lawyers and judges from outside the region.

But in a growing number of cases, justice is being served within Nunavik communities, by Nunavummiut.

Since 2000, Makivik Corp. has nurtured the creation of nine justice committees in the region, community-driven groups who work with offenders before or after they face criminal charges, but also with the people around them who are affected by their crimes.

The program emphasizes dealing with the underlying causes of crime and helping individuals not just to heal, but also to learn how to live again in their home communities.

And though administrators struggle to cobble together enough money from various government sources to accomplish their goals, they still manage to help people turn their lives around.

“So it’s not just working with the accused, it’s a way to work with everyone around them — family, community.”

The movement towards alternative, indigenous-based justice in Nunavik started as early as 1992 when the first sentencing circle for an Aboriginal accused was held in Yukon.

In the spring of 1993, Judge Jean-Luc Dutil conducted the first sentencing circle in Nunavik, in Kangiqsujuaq, where a local committee helped determine the sentencing of a man convicted of an assault.

That spurred Makivik Corp. to start looking for money to fund its own alternative justice program.

By 2001, the first six communities had signed up to develop their own local justice committees, made up of locally-appointed members: Kuujjuraraapik, Salluit, Puvirnituq, Quaqtaq, Kangirsuk and Aupaluk.

By 2010, Inukjuak, Kuujjuaq, Kangiqsualujjuaq and Kangiqsujuaq had signed on; Akulivik recently showed interest in starting their own committee as well.

“If a couple is struggling with violence in their relationship and they don’t want to go through the system, they can approach the justice committee to work with them,” she said.

“We also work with the police and ask them to refer people directly to the justice committee.”

Since 2001, adults facing first-time charges, or less severe charges, can be referred to a local committee.

In Kangirsuk, for example, a local woman who faced potential charges worked with the local justice committee. In the end, through an order from the committee, she paid for her missteps by volunteering for the community.

“She was a talented sewer so she made four parkas for people in need, in lieu of criminal charges,” St-Louis said. “Others have made qamutiks. They give time and give back to the community in other ways.”

If it works out, those cases can be withdrawn from the court.

But justice committees can also help those who go to jail re-integrate into the community once they are released.

St-Louis gives the example of an Inukjuak woman who had been involved with drug trafficking. Once the woman returned home, she discovered she was unwelcome there.

So she went to the justice committee, who encouraged her to seek forgiveness.

The woman went on the local FM community radio station and apologized for what she did and also explained the challenges in her life that she felt prompted her to break the law.

“By the end, community members were pulling up to the radio station to shake her hand,” St-Louis said.

As part of the goal of humanizing offenders, judges can also request Gladue reports ahead of sentencing, designed to recognize the individual’s life experience and take into consideration the hardships and traumas that aboriginal peoples have suffered.

“I think they’ve made a huge difference in the lives of these people,” St-Louis said. “But they take a lot of time to do.”

Funding is also limited, she said.

Since April 2014, Nunavik’s justice committees have received a total of $400,000 from Quebec, Canada, Makivik and the KRG to pay for committee coordinators in each community.

“But it’s still not enough,” St-Louis said. “The Harper government said it would maintain the Aboriginal Justice strategy for three more years, but there’s been no additional funding.”

So St-Louis is looking for new money from the regional health board and through the Ungaluk program to help maintain justice committees and also to expand services to serve young offenders.

If any of Nunavik’s remaining communities want to develop their own justice committees, they can call St-Louis at (514) 745-8880, extension 2347.