”We’re learning best practices from every time we do this.” 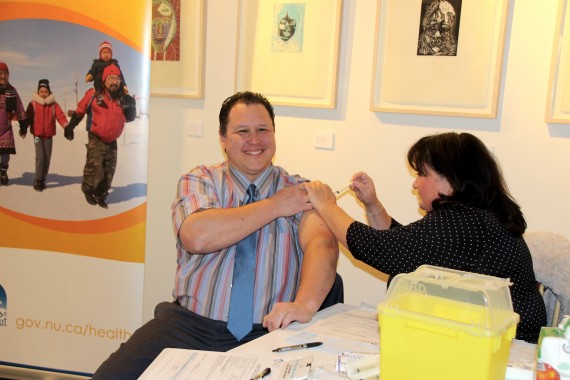 Nunavut Health Minister George Hickes, pictured here getting his flu shot, defended in the legislative assembly the speed at which screening for tuberculosis is being rolled out in Nunavut communities. (PHOTO BY BETH BROWN)

Nunavut Health Minister George Hickes defended the speed at which intensive screening for tuberculosis is being rolled out in Nunavut communities, when speaking at the legislative assembly on Tuesday, Oct. 23.

He pointed to the community screening in Qikiqtarjuaq earlier this year, which he described as “a big success” and the launch the previous day in Whale Cove of a similar screening clinic.

Hickes was responding to a question from Arviat North–Whale Cove MLA John Main, who referred to news reports in which the Department of Health stated that 17 out of Nunavut’s 25 communities have TB outbreaks..

Main said, “If we are trying to achieve the goal of eliminating tuberculosis by 2030, it seems to me that we would need to speed things up a bit or increase our presence on the ground across Nunavut in terms of the longer term plans for screening clinics in other communities.”

Hickes responded, ”In early 2018 Qikiqtarjuaq had a screening project. Here we are in the fall of 2018 and we’re rolling out another community screening initiative in Whale Cove. We’re learning best practices from every time we do this. This is our second venture down this path of such an aggressive screening program.”

He added, “We’re going to learn more and we’re going to find efficiencies. We’re going to discover ways to improve and maybe look at piggybacking with our partners on making an even more aggressive foray into different communities for this disease that shouldn’t exist in today’s world.”

At an earlier point in the session, Hickes stressed that for anyone who wasn’t screened in Qikiqtarjuaq, or for anyone in any other community, “You don’t have to wait for a community screening program to come to your community to go into the health centre to be screened for tuberculosis.”

He recommended that if anyone believes that they have come into contact with the disease, they should go into the health centre and arrange a screening test.

During the screening campaign in Qikiqtarjuaq, which has a population of about 600, doctors and nurses found 12 active TB cases and handed out more than 100 new prescriptions for TB treatment medications.

Main asked Hickes about the funding used for the TB screening clinics.

Commenting that the Department of Health is always short of funds, Main referred to the federal government’s budget announcement last February that $27.5 million would be dedicated to eliminating tuberculosis and that the funding would be funnelled through Inuit Tapiriit Kanatami.

Main asked whether the minister could “provide an update on what funding ITK has allocated towards tuberculosis activities in Nunavut to date and if any of that funding is being used to help pay for activities in Whale Cove?“

The minister commended ITK for having lobbied very successfully to get those funds.

Main also asked for an update on the scope of the community screening in Whale Cove, which started on Monday, Oct. 22.

Hickes said that his department has flown in 15 staff who’ve been contracted through the Department of Health to provide the screening.

He added that these are “a lot of the same people that were in Qikiqtarjuaq, so they already have some experience of working in Nunavut with Nunavummiut.”

The minister explained that the screening process does not just involve “identifying active cases of TB, but one of the real goals out of this other than just education is to identify latent TB, which again can lead to people getting the illness of active TB. We want to make sure that through the screening process, there is also an education component to it.”

Hickes thanked the hamlet of Whale Cove for their cooperation and added that there would be an economic benefit to the hamlet, because in the individuals who were flown in to do the screening are staying in hotels in the community.