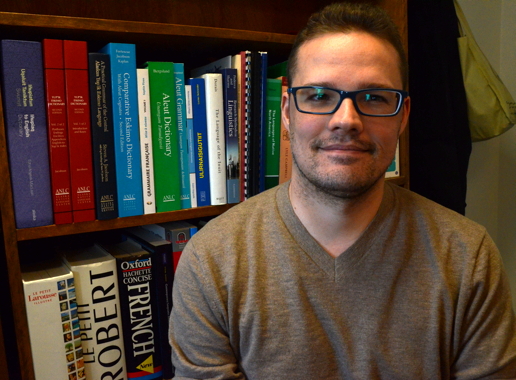 Linguistics professor Richard Compton, at l’Université du Quebec à Montréal, is trying to get his students interested in under-studied languages such as Inuktitut. (PHOTO BY DAVID MURPHY)

MONTREAL — For a guy who studies languages, Richard Compton uses his hands a lot when he talks.

And today, he’s talking, and gesturing, about Inuktitut, and how “under described” it is as a language.

“There are thousands and thousands of books on the structure of English, English semantics,” Compton explains.

“There’s a lot less on this entire language family than just American English. Or even New York English,” said Compton with a chuckle and a wave of his hands in his fourth floor office at the Université du Québec à Montréal.

He ought to know. Compton’s written dozens of complicated-sounding research papers about the Inuit language.

You’d probably have to be a linguist — someone who studies languages and their structure — to understand the subtleties of that research.

So the UQAM linguistics professor breaks down his specialty in Inuktitut a little more simply — he’s interested in figuring out word distinction.

“It’s my job to ask: is that more like a little -y suffix to put on nouns to make them diminutive or is it more like a real adjective?”

There aren’t many linguists outside of Inuit Nunangat regions who specialize in Inuit languages as Compton does.

“Not hundreds,” he said, adding he couldn’t guess an actual number.

But he does hope to inspire students to focus on Inuktitut, or other similarly under-studied languages.

And he could well inspire some — he’s currently teaching a class where undergraduate students have to dissect the Inuktitut language as spoken by a native speaker.

The course is called “analyse avec informateur,” which is commonly called “field methods” in English. The point of the course isn’t to learn to speak Inuktitut, but to study the language in a scientific way.

Compton explains that in his class, students learn how to gather data from a language, write short descriptive statements about the sound system, word structure, sentence structure and more.

Or, in other words, using “knowledge to describe a language that you don’t know anything about.”

The students look for intonation, stress and pitch in the language. When using a computer audio application, they can even monitor the different sound waves to describe the language.

“This sort of prepares you for this situation that you can encounter in the field as a linguist,” Compton said.

Aside from the technical side of the class, Compton says it’s important students are exposed to different indigenous languages.

“It’s also just good societally, for people to know more about the linguistic situation of the communities in the North and about the Inuit and Inuktitut,” Compton said.

“I think it’s just, on one hand, them being well-rounded and knowledgeable citizens about the country, the continent, the world they live in.”

That rings true for at least one of Compton’s students, 26-year-old Gabriel Martin.

“I was struck by this obvious statement: the term ‘Aboriginal peoples’ includes many distinct identities as much as ‘Qallunaat’ does,” said Martin, whose primary language is French.

“It then [became] obvious that, like most Quebecers, I hardly know anything about my northern neighbors. It was the opportunity for me to dispel some myths.”

Compton, who is currently helping to edit a new version of a dictionary of the Kangiryuarmiut dialect of Inuinnaqtun, has travelled to Iqaluit, Baker Lake and Ulukhaktok in the Northwest Territories to carry out his research.

Although he says he’s no sociolinguist — the study of the relationship between language and society — he knows the importance of researching and documenting ancient words and languages to revitalize and preserve them.

But research alone won’t save a language. Television, other media, video games and parents pressuring kids to speak English or French to get good jobs also play a big role in language viability, Compton said.

A language survives, he said, when members of the community speak it as often as possible.

“I did notice in Baker Lake it seemed like a lot of the younger kids were speaking in English, playing in English. And that’s not ideal,” Compton said.

“But I understand, also, the challenge for the territory in promoting fluency and bilingualism; that often the fluent speakers aren’t necessarily in a position to be able to teach at a high school level,” he said.