“How can we help all these women?” 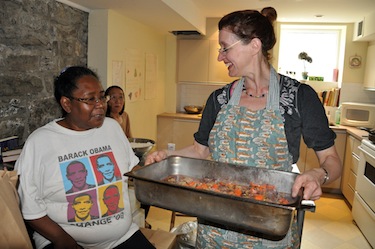 Chez Doris Director Sylvie Cornez (right) helps cook up a caribou stew last May with the centre’s former Inuk case worker, Annie Pisuktie. But Cornez and directors of other shelters worry that Montreal’s homeless women and men living in difficulty are not getting the support they need. (PHOTO BY SARAH ROGERS)

Montreal’s homeless women and those living in difficulty are not getting the support they need, says a group of the city’s shelters.

And that includes Inuit women — some new to the city, others long-time residents — who rely on those shelters.

Five organizations who run day and night shelters in Montreal made a public plea to officials Nov. 24, asking for more financial support to deal with the increasing numbers of women in need.

“The situation is pretty much the same in all the shelters,” said Sylvie Cornez, director of the women’s day shelter Chez Doris, which welcomes up to 20 Inuit clients every day.

“We’ve seen a dramatic increase in the past two years and these women just don’t have what they need.”

“Some women don’t have beds to sleep in at night,” Cornez said.

Chez Doris welcomes women during the daytime hours, offering a warm lunch, a place to use the phone or take a shower.

But while the centre once averaged about 50 clients a day, that average has risen steadily to about 70, Cornez said. This month alone, the shelter has seen days with up to 120 women dropping by the house.

“These numbers concern us, with only four staff on the floor,” Cornez said.

Inuit clients make up about 15 per cent of all the women who come to Chez Doris, a figure that’s also on the rise.

That’s likely due to new partnership between Makivik Corp. and the shelter, which has added a full-time Inuit caseworker to Chez Doris’ staff this year.

Since the shelter hired caseworker Annie Pisuktie last spring, Inuit clients have been able to rely on Inuktitut-language support and programming and someone who understands where they come from.

Pisuktie has since left the position and has recently been replaced by Judy Hayahok, who came to Montreal from Kugluktuk with a background working with male prisoners.

Cornez says the shelter is fortunate to have the support of Makivik to help serve its Inuit clientele.

But ideally, the shelter’s $800,000 annual operating budget could use some padding to hire another one or two outreach workers, Cornez said.

“If you live on welfare, you can’t necessarily afford a place to live, and it’s hard to feed yourself,” Cornez said. “We’ve been seriously asking ourselves: how can we help all these women?”