“Uncle Bob” Carveth hopes to inspire others as his health wanes 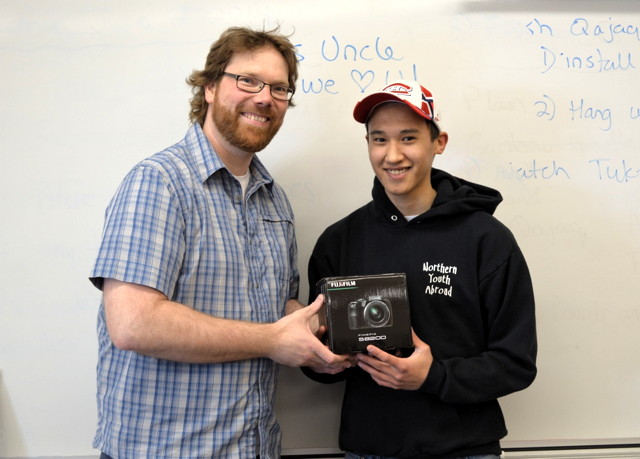 Mason Tautu receives a camera from science teacher Glen Brocklebank at Victor Sammurtok School in Chesterfield Inlet. Bob Carveth donated the camera to Tautu because of the student’s excellent showing at a science fair this past year. (PHOTO COURTESY OF BOB CARVETH) 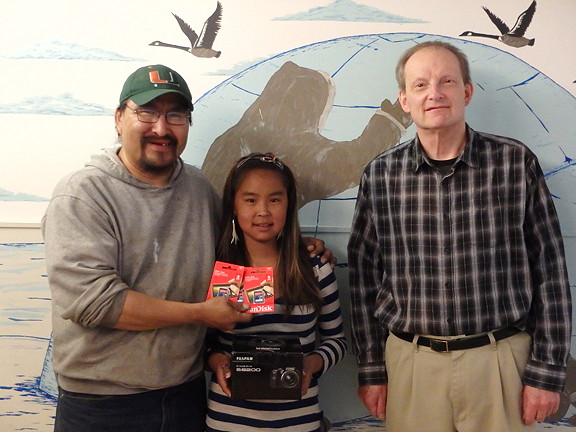 Neevee Suluk poses with her father (left) and Levi Angmak Elementary School principal Marvin McKay-Keenan June 10 in Arviat. Suluk, a Grade 5 student, received a camera from Bob Carveth for her hard work this school year in using Inuktitut. “It is nice for all of us attending and working at Levi Angmak Elementary School to know that someone from as far away as Australia is interested in what is happing here in Arviat,” McKay-Keenan told Carveth in an email. (PHOTO COURTESY OF BOB CARVETH)

Bob Carveth, the eccentric Australian who gives away prizes to Nunavut students from his home Down Under, is, under his own admission, in failing health.

Carveth had heart bypass surgery a while ago, and he told Nunatsiaq News that he can just about walk to the post office and back a few blocks away until he’s out of breath.

“I don’t travel now because of age and failing bypass surgery,” Carveth said in an email.

The 72-year-old Australian, who has never set foot in Canada, has been giving away prizes to kids in Nunavut for their achievements in Inuktitut for more than three years now.

His ultimate goal is to help preserve the language.

But Carveth’s health concerns aren’t limiting his generosity — nor his virtual travels to places around Nunavut via the Internet.

“I do, in a way, experience a form of a holiday at every place I donate to, as I Google photos and data on each town,” Carveth said.

Carveth — widely known throughout Nunavut as “Uncle Bob” — is on a mission of sorts.

He’s been keen on preserving languages ever since teaching English as a second language in New Guinea.

The Norfolk Island people of Melanesia, and their endangered language, inspired him. And then, through his research, he stumbled upon Inuktitut.

Carveth has even been learning Inuktitut — through books, YouTube videos and the odd phone call he makes to the Inuit friends he’s made in Nunavut.

And Uncle Bob is continuing his generosity this year.

Along with schools in the Northwest Territories and Alaska, he’s donated prizes that exceed thousands of dollars to schools in Grise Fiord, Gjoa Haven, Chesterfield Inlet and Arviat.

In April Carveth donated a camera to Ethan Tassiuk with the Arviat Film Society after he stumbled upon a blog post with Tassiuk speaking out against bullying.

But Carveth wanted to give more when he found out about Tassiuk’s past.

“[I] found a story where some years before Ethan Tassiuk was attacked by a large dog and badly mauled,” Carveth said.

That happened in 2009 — Michael Illnik saved Tassiuk from the dog.

Illnik received a Commissioner’s award for his heroism in 2012, but Uncle Bob wanted to reward him further.

Carveth donated a Panasonic FZ200 camera, worth about $600, to Illnik this past April at Qitiqliq Middle School.

And within the past month, the Aussie philanthropist has donated cameras to Jordan Takkiruq in Gjoa Haven and Mason Tautu in Chesterfield Inlet for becoming finalists in their respective science fairs.

He also gave away a camera to Levi Angmak Elementary School in Arviat, which eventually went to Neevee Suluk for her excellence in Inuktitut.

But how does Carveth get the money to make these donations?

“I had planned this excursion [in kind] to the North many years ago by buying up antiques and over the last 10 years I have been selling them off and using the money to donate to schools overseas,” Carveth said.

Ideally Carveth wants to give gifts to every school in Nunavut, the Inuvialuit settlement area, Nunavik, Nunatsiavut and other First Nations around Canada, “but age and its problems will not allow that to happen.”

He’s hoping his actions inspire others to do the same when they get older — he doesn’t understand how people can squander their money in their later years.

“It despairs me when I ever enter a sporting club in Australia and see old pensioners shoving their money down the throat of poker machines at a humungous rate when they could do so much donating their spare cash to overseas causes.”

And Carveth’s hope of planting the seed of generosity in the minds of others might already be happening.

He said a postal worker in Australia has helped with donations, and a man from Los Angeles has donated DVDs to schools in the North now too.

“Hopefully I can motivate like people to do the same thing I have been doing.”