Natan Obed elected to a second term as ITK president

“I’ve worked with different Inuit leadership to get things done” 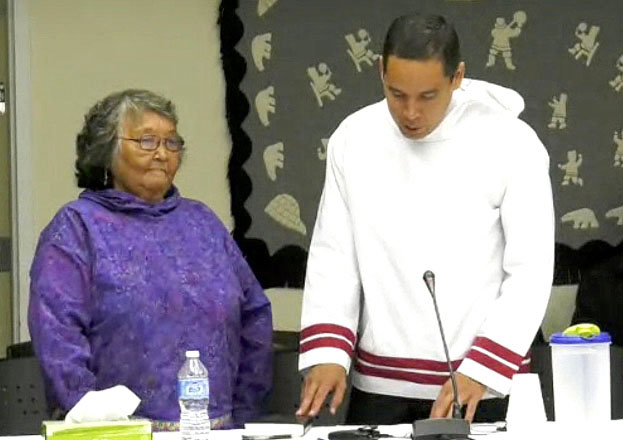 Natan Obed is sworn in on Thursday, Aug. 16, after he was re-elected as president of Inuit Tapiriit Kanatami in Inuvik, N.W.T. (IMAGE COURTESY OF ITK) 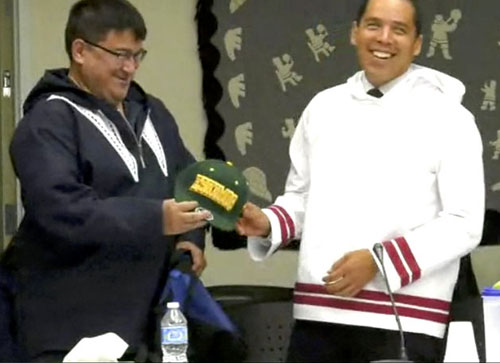 “We’ll ensure that we continue to have improved relations between our Inuit regions in the way in which we undertake our work,” Obed said in a short speech following his re-election, “and also pledge to do even more to communicate with all Inuit across Inuit Nunangat to promote Inuit unity.”

The election was a three-way race that pitted Obed against two other Nunavut hopefuls.

Peter Williamson, a political newcomer, campaigned on his depth of experience in Arctic policy and economic development with the federal and territorial governments.

Obed was elected by a group of 13 voting delegates representing each of the four Inuit regions. He garnered a majority of those votes, ITK said, though the organization did not offer a breakdown.

His re-election drew congratulations from other Inuit and government leaders, including Nunavut Premier Joe Savikataaq.

“His work over the last three years has put the culture, challenges and priorities of Inuit on the national and international stages,” Savikataaq said in an Aug. 16 release.

Obed credited his re-election to the relationships he’s made over his last term and a track record for moving ITK’s various projects forward.

“Today was less about introducing myself to the board, but [saying] what I believe is possible in the next three years,” he said.

“I think the difference is that I’ve worked with different Inuit leadership to get things done.”

But Obed was pressed again—as he was in 2015—to answer questions about his fluency in Inuktut, by a Makivik Corp. delegate Andy Pirti and Ittinuar, who told delegates that Inuit have a “right to understand what’s going on in their own language.”

“I don’t think it’s going to be put to rest until I’m entirely fluent and able to communicate with all Inuit,” Obed said after his election.

Obed said he understands the symbolic and practical reasons to expect a leader would speak Inuktitut. But Obed said it has also allowed for negative debate around identity and the ability of non-Inuktut-speaking Inuit to hold office at ITK.

“We need to do more. For my part, I pledge to continue to learn Inuktut and continue to promote the language,” he said.

“But I’m also calling on Inuit to be more empathetic in how we approach language.”

ITK’s president is elected by its group of delegates appointed by each of the Inuit Nunangat’s four regional Inuit organizations.

The Inuvialuit Regional Corp. and Nunatsiavut Government each brought three voting delegates, while Monica Ell-Kanayuk, the new president of Inuit Circumpolar Council-Canada, also had a vote in the Aug. 16 election.

ITK’s election wrapped up a week of board meetings and the organization’s annual general meeting, which included ITK’s efforts towards new Inuit-specific policy and legislation.

The organization’s board of directors also finalized ITK’s National Inuit Climate Change Strategy, the details of which will be released in the coming months.