“I don’t think we have made it yet, we haven’t played in Pang! Or Arviat!” 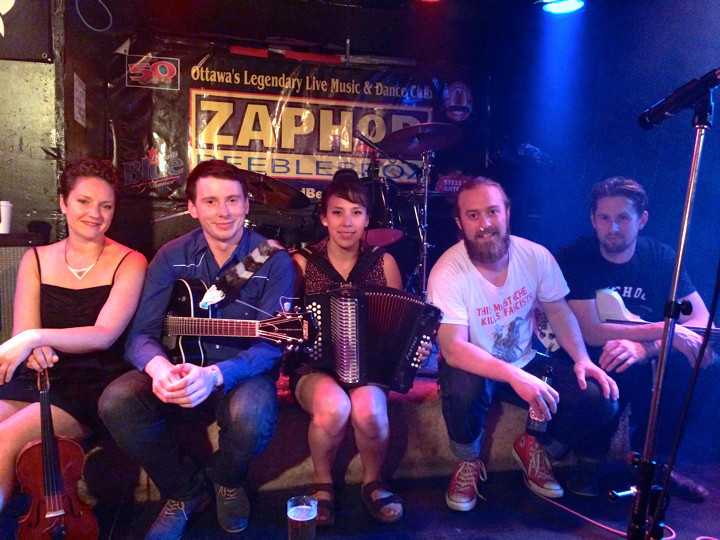 Hot off two concerts in Ottawa and Toronto, Nunavut’s band of the moment, the Jerry Cans, are riding a wave of popularity and fresh new tracks.

The five-piece, Iqaluit-based band plays high-energy songs with Inuit throat singing and a mix of English and Inuktitut lyrics.

The band just released their second album, called Aakuluk — an Inuktitut idiom that in some dialects expresses affection for another person.

After the gigs in Ontario, lead singer Andrew Morrison took some time to explain the new album to Nunatsiaq News.

NN: Aakuluk was recorded at the Woodshed Studio in Toronto. Other artists who have recorded at Woodshed include: Blue Rodeo, Feist, Ron Sexsmith, Bruce Cockburn and Lucie Idlout … and now, of course, The Jerry Cans. Can you give your thoughts on being part of such a prestigious group of musicians?

AM: Those other bands are amazing, we are a lucky bunch to be able to record there. It has also opened a lot of doors for us in terms of meeting people. I love it and I also don’t love it as I feel like we sometimes are getting away from why we got into the music — to share it with the wonderful Nunavummiut that don’t always get to see live bands. We are getting more well known across Canada and it is pulling us that way, but we would rather be pulled to Igloolik or Naujaat (congrats on reclaiming the name!).

NN: How long did it take you to record Aakuluk? How was it?

AM: We recorded Aakuluk in a flash of a week. Baby was there and she was cute and got to meet Jim Cuddy from Blue Rodeo. None of the rest of the band did, which was kind of funny! It was great and hectic and emotional and everything crazy.

NN: There’s a good mix of Inuktitut and English lyrics, especially for songs like Alianait and Qanuinngittuq. How do you know when to switch up the languages?

AM: Our first album was a bit more separated in terms of language, we would do a whole song in English and the next song all in Inuktitut. We thought it might be cool to try and create each song bilingually to try and allow people to try and learn a few words in Inuktitut as it mirrors the English verses.

NN: There’s some pretty strong messages in your song lyrics. For example, in Qanurli Isumavit, you say “Wonder why you hear the chorus of families cry, why young people continue to take their own lives” and “Seen too many elders lay their grandkids to rest, while government messiahs try to fix it from behind a desk.” Is there hope these words might inspire change in people, or even at the government level?

AM: Qanurli Isumavit is a song I still struggle with every time I sing it. We sometimes hear we are such a “fun” band and that we sometimes act as representatives of the North. I struggle with the idea of representing such a complicated place like Nunavut and figured it is important to talk about the uncomfortable side of things. When we hear about suicide in the territory […] it can sometimes become somewhat normal. I don’t know if that makes sense, but it is such a tragedy to lose young people and we have to try as hard as we can to resist the idea that suicide is acceptable.

NN: You guys say the message in your songs is that “we all should dance” What do you mean by that?

AM: I think what we mean when we say “we all should dance” is a call to make sure we celebrate the positive in our lives. It is easy to have the devastating tragedies dominate the way we think about Nunavut. Whether it is another young person taking their own life, or the dysfunction of some parts of the government, it can easily become overwhelming.

When we focus too much on this we forget the amazing stories, personalities, and experiences that we have here that would never happen anywhere else. If we don’t celebrate the beauty of this place we won’t ever be able to find strength to change the shit we don’t like. Plus we find that we see the most amazing dance moves from the folks that are the most hesitant to dance at our shows so we always have to prod them a bit to get up on the dance floor.

NN: The Jerry Cans were named in the top 20 fold & roots shows in Toronto this summer by blogto.com. You’re also the first Nunavut band ever to play at the Toronto music festival, NXNE. The band has come a long way in a short period of time, but do you think The Jerry Cans can make it into the Canadian mainstream music scene?

AM: I am not too sure if we will make it to the mainstream of music. We love what we do and I think the highlights of our music careers often come when we are performing in the communities, signing autographs on young kids beautiful parkas (sorry to all the seamstress mothers out there).

We always talk about being proud to sing in Inuktitut and I think the most proud moments of our time playing music are stories of young people saying shit like “I love Inuktitut music!” or going to school proud after a lunch of seal meat… We try to send a very clear message: you should be proud of your grandparents, proud to hunt, proud to be from Nunavut, proud to speak Inuktitut. I think it can be empowering to hear that.

All that said, we really like sharing with the south but our roles are different when we play down there. First off its way hotter down there so we sweat more. But we also act more as ambassadors, explaining how delicious seal meat is to vegans, explaining that suicide in Nunavut is more than a news story.

AM: People are so interested in the North I think there is a genuine interest in what we do. There are so few avenues to learn about the North it is a shame really. We always get a pretty great response from the south especially on the ol’ seal hunt as most of them have never heard the other side. When I tell people that Nancy’s dad would feed 15 people everyday with seal after seal — which means they weren’t buying $45 cheese whiz — they really have a different perspective.

NN: What sort of reception did you get from the crowds in Ottawa and Toronto? What reception do you usually get outside of Nunavut?

AM: The reception was alright! Just as we expected, reunion of all ex-pat northerners which is always awesome.

NN: I saw you guys play at the curling rink in Iqaluit for the Nunavut album release and cancer research fundraiser, and you killed it. Great stage presence, nice banter with the crowd, and you looked like rock stars with those The Jerry Cans sunglasses. Do you feel as if the band has “made it” in a sense?

AM: Oh I don’t think we have made it yet. We haven’t played in Pang! Or Arviat! These are like the New York and Tokyo of Nunavut. Once we have hit all the right spots in our own backyard we can say we have made it.

NN: What’s your favourite song you like playing live off the new album?

AM: My favourite song is “I don’t mind.” I think it’s funny to sing in Inuktitut and then sing about singing in Inuktitut. I always try to write about shit that is really going on in my life because I can sing it with more… gusto.

You can find the new Jerry Cans album at the Nunatta Sunakkutaangit Museum and on iTunes.