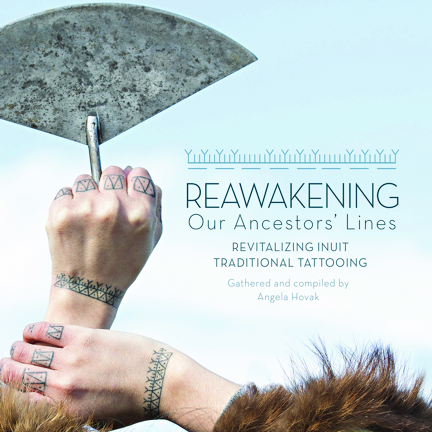 A potential cover for tattoo artist Hovak Johnston’s upcoming book—Reawakening Our Ancestor’s Lines—to be released by Inhabit Media in November. 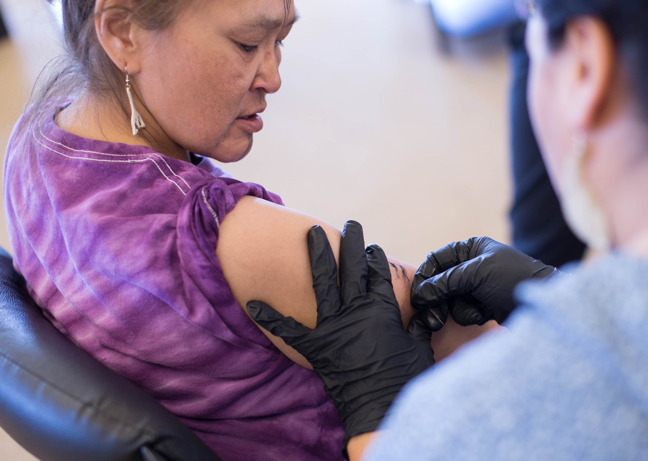 Hovak Johnston works on a tattoo for Millie Angulalik in Kugluktuk in the spring of 2016. The Inuit tattoo artist is releasing a book with Inhabit Media that documents the tattoo project she led in the western Nunavut community. (PHOTO BY CORA DEVOS)

In traditional Inuit tattoos, there is a story in every line.

That’s why a new book by traditional tattoo artist Hovak Johnston will have more than one story line.

The book, to be released by Nunavut’s Inhabit Media in November, tells the story behind tattoos on 26 Kugluktuk women which Johnston rendered during a visit to the Kitikmeot community in spring 2016 as part of her Inuit Tattoo Revitalization Project.

“It’s the women’s stories of why they chose their markings and what their markings mean to them,” Johnston told Nunatsiaq News, adding that her own story will also be in the book: Reawakening Our Ancestor’s Lines.

“It was really important for me to have this project documented because it was the first of its kind,” Johnston said. “It is their own stories coming from them—it was important to have the women’s stories heard.”

And what was her goal for the book itself?

“I envisioned the beauty of the women, and showcasing their beauty,” she said.

In the book, photographer Cora DeVos features that beauty with images taken throughout the tattoo process.

“There was a lot of pride and trust in their eyes when the photos were being taken,” said Johnston, who was recently honoured with a Meritorious Service Medal from the Governor General of Canada for her work breathing new life into the tattoo tradition.

The practice of traditional tattooing among Inuit women was largely dormant for the last century. That is, until recently, when artists such as Johnston awakened the art form—originally a signpost of womanhood and thought to impart strength and guidance, she said.

While Johnston’s efforts have been to revitalize the practice, she has also looked to modernize it, encouraging women to find new meaning in the lines they choose for their face, arms and hands.

“I don’t like to focus on the stuff that has been lost,” she said, preferring to focus on how tradition and cultural practice can evolve.

After eight years spent honing her craft, Johnston is now beginning to train other women in the art of traditional tattooing.

“That’s the goal, to get as many women training in each region. So we can have more Inuit women tattooing each other,” she said.

She uses three techniques: needle and thread, stick and poke, as well as a tattoo gun.

The tattooed lines—which can have layered meanings and often represent family, place or memory—leave many women with a truer sense of identity, Johnston said.

The practice of tattooing was shunned for so long that some Inuit women are reluctant to think they can be tattooed, she said.

“It’s so hard to see some of the women that don’t feel Inuk enough,” Johnston said. “But when they learn more about the history (of Inuit tattooing)… after hearing the story of how it was banned and shunned and how our traditions were taken away… then they get that fire again. Just being here, we are Inuk enough.”

Johnston plans to hold the launch of Reawakening Our Ancestor’s Lines in Kugluktuk.