“We did it all on our own,” says entrepreneur in western Nunavut hub 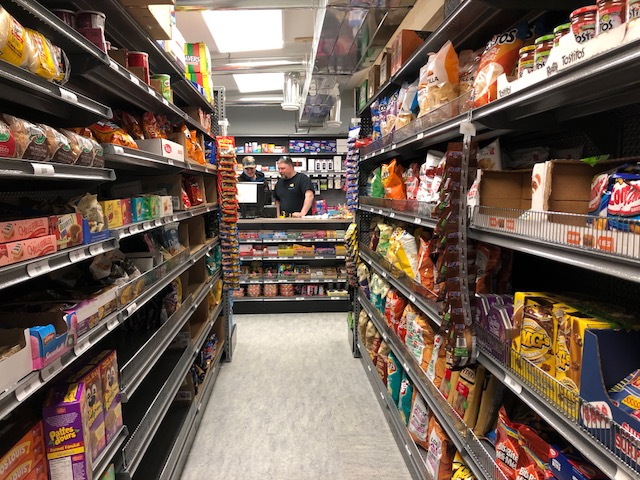 Brandon Lyall and Keith Lear talk at the cash of the recently opened new store for Kalgen’s Dis and Dat in Cambridge Bay. (PHOTO BY JANE GEORGE) 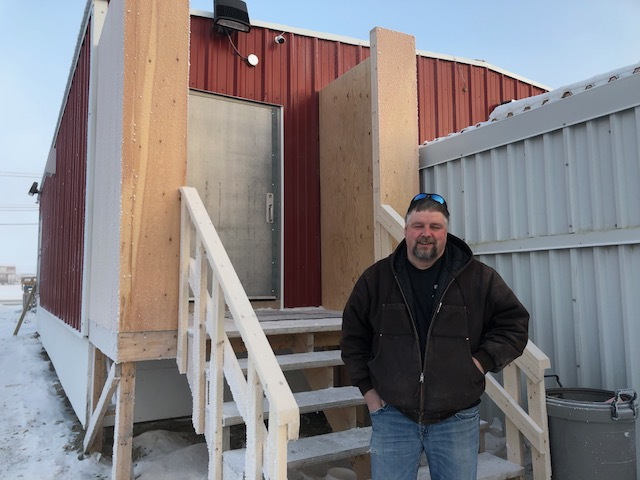 Keith Lear stands in front of his new, expanded convenience store in Cambridge Bay, which he built without either government grants or bank loans. (PHOTO BY JANE GEORGE)

CAMBRIDGE BAY—You may not feel like slurping a frozen slush cup when the wind chill is -30 C or lower, but this treat remains popular year-round in cool Cambridge Bay.

That’s the word from Keith Lear, who has a large operation to make slush in the back of his new store, Kalgen’s Dis and Dat, a compact, windowless space that’s crowded with merchandise.

In the 1,200-square-foot convenience store, open every day from 5 p.m. to 11 p.m., you can find just about anything you might want, such as food stuffs, dry goods, Halloween costumes and even a big selection of travel-size toiletries.

For the store’s opening, just two weeks ago, Lear also brought in a selection of fresh fruits and vegetables—navel oranges, fresh-picked apples and bunches of broccoli.

At $1 for a giant orange, Lear wasn’t making any money with the produce, but he said he plans to regularly bring in a similar selection of fresh foods from a major grocery chain: the idea is to encourage people in this community of 1,900, where he’s lived for 25 years, to be able to buy quality food.

“The big stores here, they are told what to sell. We want to offer what our customers want,” he said.

In November 2013, when Lear was still working for the Government of Nunavut, he opened a much smaller store, which mainly sold soda pop, chips and candy. It was also called Kalgen’s Dis and Dat—Kalgen’s being an inversion of Neglak, his wife Natasha’s family name.

But as that store became more popular, Lear began to plow his profits towards the construction of a larger store, similar to what’s found in his home province of Newfoundland.

“I built it based on the cash flow,” Lear told Nunatsiaq News. “We did it all on our own.”

With help from family members, he put up the building “from the ground up.”

Today, he has 12 employees working at the store and at the airport.

But you’ll often find Lear behind the cash register, too, because staffing remains one of his largest challenges.

As well, the cost of freight into Cambridge Bay is high, so careful planning is essential.

In 2014, Lear was among the unlucky clients of the now-defunct Northern Transportation Ltd., which cancelled the last barge into Cambridge Bay, leaving many without their orders for months.

This October, the Northwest Territories’ Marine Transportation Services, which bought NTCL’s assets, also cancelled their last barge, leaving many in the lurch.

Since his bad experience with the Hay River-based barges in 2014, Lear said he’s started to use eastern shipping companies for his sealift. To do that, he’s had to develop connections with new suppliers, mainly in Quebec, or deal with an expediting company for his orders.

But it’s been worth it, Lear said. This year all the supplies for his new store arrived on time.

“Otherwise, I’d be in a disastrous situation,” he said, referring to the plight of many businesses that suffered losses due to the MTS cancellation.

The store’s operational challenges also include vandalism. While the metal-clad new store, which has thick steel doors, looks strong enough to withstand a break-in, children were recently spotted at night, vandalizing the video surveillance cameras outside.

That prompted Lear to post photos of the young culprits on the Cambridge Bay Facebook news page, to encourage their parents to take charge.

Kalgen’s does most of its outreach through social media, where Lear recently thanked his family: his wife “for supporting me all the way and sacrificing camping trips and boating trips and tons of family time while I pursued my dream,” and “my parents, who also kept me motivated and worked the store many nights, and the last month worked with me til sometimes 3 a.m. to get the new store ready.”

“And of course our awesome staff who kept serving all of your smiling faces throughout the last three years while I was in the building and planning stage. And last but not least, Brandon Lyall, who had a major part in building the new store. Ninety-five per cent of the nails and screws were driven by him from the ground up, and he stuck by my side through my stressful days.”

The opening of the new convenience store, with its evening hours, has been noted by other retailers in town. The Northern extended its hours until 9 p.m. and Kitikmeot Supplies Ltd. has added a selection of snacks to its stock of building materials.