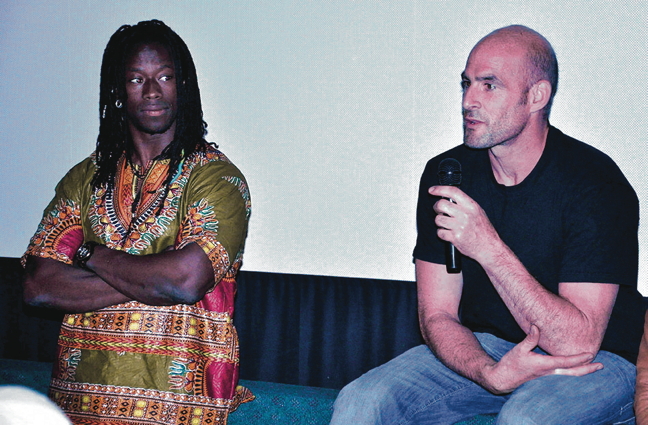 Guillaume Saladin, right, and Yamoussa Bangoura address the audience at the Astro Theatre in Iqaluit June 29 after the screening of a documentary, “Circus Without Borders.” The film follows the overlapping careers and dreams of the two circus performers who come from opposite sides of the world. (PHOTO BY THOMAS ROHNER) 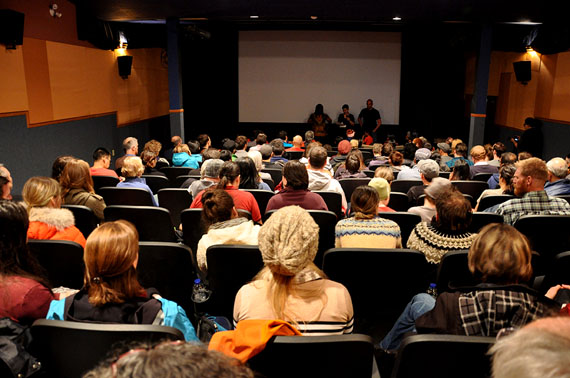 More than 120 Iqalungmiut packed the Astro Theatre June 29 to watch “Circus Without Borders,” a documentary about Artcirq and Kalabante — a circus troupe based in Guinea in West Africa — presented by the Alianait Arts Festival. (PHOTO BY THOMAS ROHNER)

Not only can your dreams come true if you believe in yourself, but they can connect you to people and take you places you can’t even imagine.

That’s what more than 120 moviegoers at Iqaluit’s Astro Hill Theatre heard June 29 as they watched “Circus Without Borders,” a film presented by the annual Alianait Arts Festival.

The audience laughed and cheered often throughout the hour-long documentary, especially as the lights came back on at the end of the film.

The documentary follows the friendship and careers of Artcirq founder Guillaume Saladin and Yamoussa Bangoura from Guinea in West Africa, founder of the Kalabante circus in his home country.

“We have the same dream: helping people through circus,” Saladin says early in the film.

But both men, who were on hand to answer questions from the audience afterward, agreed there’s something bigger than the circus: the power of dreams.

“Everybody comes into the world with a dream,” Bangoura says in the film.

“So if that’s my dream, my mother and father can’t [even] change that.”

The pair met in Montreal as circus performers in 2001. Saladin spent summers in Igloolik as a child, with his father, the renowned anthropologist Bernard Saladin d’Anglure.

That was before beginning a career as a circus performer.

A traveling circus troupe then discovered Bangoura, launching an international career that landed Bangoura in Canada.

After meeting in Montreal, the two became fast friends.

“We didn’t even say hello. We just started performing together,” Saladin says in the film.

The film alternates between rehearsals and performances of Artcirq, mostly shot in Igloolik, and Kalabante, mostly filmed in Guinea.

The Artcirq rehearsals build up to their performance at the 2010 Vancouver Olympics.

As the Nunavut troupe performs on stage, a man dressed in a polar bear costume waits anxiously in a stairwell for a door to be opened marking his entrance, running out when the door is opened.

The audience laughed at that scene in particular, as well as at scenes in Guinea showing Kalabante members struggling to master traditional Inuit athletic games.

The high point for the Kalabante troupe in the film comes when 10 athletes are chosen to travel to Montreal to perform in Cavalia — an acrobatic show featuring humans and horses.

The Iqaluit audience laughed loudly when the Guineans had to be shown how to use the light switches and electrical stove in their new Montreal apartment.

But there were moments of sadness too, as both Saladin and Bangoura reflected on Artcirq members who have died, including Solomon Uyarasuk and Joey Ammaq.

“When you see all those guys [in the film]…and they’re not here today, I feel really empty inside,” Bangoura told the audience after the film.

But in sharing his experience and his culture with his Canadian friends, Bangoura said he found something powerful.

And Saladin, overwhelmed at times by the film’s contents and his own feelings on the subject, said life can be difficult but to be happy, you have to listen to your dreams.

Artcirq never set out to be a factory of circus performers in the North, Saladin said — “we’re just trying to work together, trust each other and go forward.”

Sometimes difficult things happen that are, of course, not our choosing, he added.

“Sometimes when you’re driving the skidoo in the snow or the fog, you don’t see, you only see a metre away. You forget the big picture. But when the sky clears up, you see mountains and, oh ya, you see friends over there,” he said.

“We all go through that. That story you just watched is ours, but you all have yours and, what I think is important is to share, as much as you can, whatever you have that’s nice inside.”

The film made its world debut in Boston earlier this month. The Iqaluit screening marked the first time it’s been shown publicly to a Canadian audience, Saladin said.

Artcirq will perform a cabaret as part of the Alianait Arts Festival June 30 and July 1 at Nakasuk Elementary School.