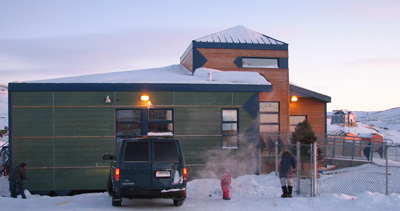 Kangirsuk’s only daycare centre, Amaartauvik, has been closed since Jan. 8 due to the presence of mould. (PHOTO COURTESY OF NUNAVIKCHILDCARE.CA)

Officials with Nunavik’s regional government have opted to build a new childcare centre in the community of Kangirsuk, after mould was discovered at the current centre last winter.

The Amaartauvik childcare centre, the only centre in the Ungava coast community, closed its doors last January after inspections showed that the centre’s indoor plumbing had allowed moisture to enter the structure, forming mould between its windows and walls.

But rather than decontaminate the current centre, the Kativik Regional Government decided to build a new 30-space centre in the community of about 550 people.

“We decided that it would cost more to actually renovate it — more than it would cost to actually build a new children centre,” said Julie-Ann Berthe, assistant director of the KRG’s sustainable employment department, which oversees Nunavik’s 19 childcare centres and 1,009 childcare spaces.

“Cost effectively, it was most appropriate to go with the new centre.”

The current centre was first constructed in 2000.

Crews will destroy that building in the spring of 2016, Berthe said, adding that they’ll try to salvage some materials from the original centre, including windows and doors.

In the meantime, Kangirsuk’s childcare services operate temporarily out of a former sewing centre, while the centre’s cooks work out of a nearby construction camp kitchen.

Kangirsuk is not alone; a number of other centres in the region have been plagued with mould and other contamination issues linked to the buildings’ construction.

At least four childcare centres have been decontaminated this year, including the centre in Akulivik, after mould was found growing on the interior walls or under flooring.

Other centres in Nunavik have had to have been decontaminated from oil exposure, often caused by burst pipes.

The construction of Nunavik’s childcare centres was staggered in the region’s communities beginning in the late 1990s and through the mid-2000s.

But since then, 12 of the region’s 19 publicly-funded childcare centres, known as Centres de la petite enfance or CPE in Quebec, have faced lengthy closures and multi-million dollar repairs.

Renovating a childcare centre in the region can run the KRG about $2 million a centre, the regional government has estimated.

So it often makes more sense to repair existing facilities, rather than leave a mouldy building in a village, although not in the case of Kangirsuk’s centre.

A lawsuit the KRG filed against one of the centres’ builders helped to pay for renovations in some of the affected centres, but Berthe said she wouldn’t comment on the Kangirsuk centre specifically.