Nunavik says no to uranium mining 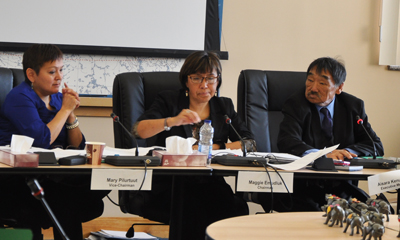 KUUJJUAQ — Nunavik’s leadership has taken a position on the future of uranium mining in the region — and it’s a resounding “no.”

And Makivik Corp. and the Kativik Regional Government plan to say so in a joint brief that will be submitted to public hearings in Nunavik next week.

The independent Quebec body called the Bureau d’audiences publiques sur l’environnement, or BAPE, is returning to the region for a third and final round as part of its province-wide tour to gauge the public’s opinion on uranium mining.

“We’re going to say that there should be no uranium mining in Nunavik, period,” KRG chair Maggie Emudluk told a meeting of regional councillors in Kuujjuaq Nov. 26.

The BAPE has been to Nunavik twice already in 2014, but while its previous visits took questions and provided information to the public, its upcoming stops in Kuujjuaq Dec. 2 and Kangisualujjuaq Dec. 3 will be to hear the region’s position on potential uranium development.

It wasn’t clear until now that Nunavik’s leaders have taken a public stand on the issue.

At the Kuujjuaq hearings this past June, Makivik said in a presentation that it’s “not the role of Nunavik leaders” to convince the population of Nunavik to accept uranium mining.

Just last week, Makivik presented its brand new Nunavik Inuit Mining Policy to delegates at a Quebec mining conference, which sets out conditions for resource development across the region, with Makivik as a first point of contact.

“Makivik has developed this policy to better monitor and guide mining projects in the region,” said Makivik president Jobie Tukkiapik in a release earlier this week. “The policy aims to maximize social and economic benefits for Nunavik Inuit, and minimize negative environmental impacts.”

And what’s contained in the joint Makivik-KRG brief won’t be made public until it’s submitted at the hearings in Kuujjuaq Dec. 2.

There is no push to start mining uranium in the region any time soon, although there are several hundred “mineralized occurrences,” or identified deposits, of uranium throughout the region.

Most are clustered around George River, including Azimut’s two early-stage exploration projects on its Rae North and Daniel Lake properties, southeast of the Ungava Bay community of Kangiqsualujjuaq.

On Dec. 3, the public hearings move to Kangiqsualujjuaq, where they’ll be hosted at the local community hall at 1:30 p.m. and 7:30 p.m.

The commentary gathered from Nunavik and from communities across Quebec will be compiled into a report, which the BAPE will deliver to the provincial department of sustainable development, environment and the fight against climate change, le ministère du Développement durable, de l’Environnement et de la Lutte contre les changements climatiques, by May 2015.