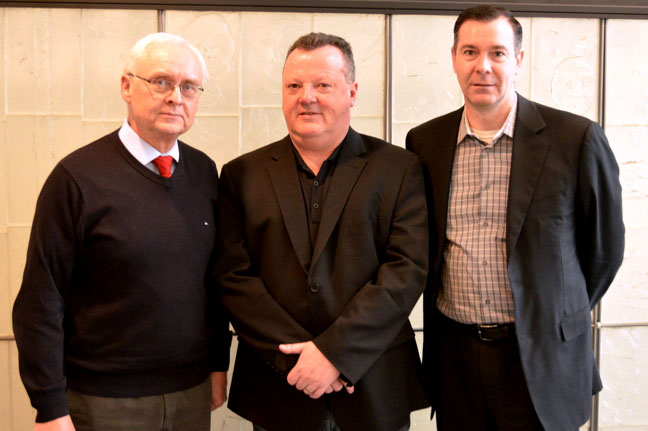 If Nunavut MLAs hoped to hear “It’s Hard to Say I’m Sorry” for controversial codeshare agreements between Nunavut’s three main airlines — Canadian North, First Air and Calm Air — the tune they heard instead was “The Times They Are a-Changin,’” from largely unapologetic airline executives this week.

“Running an airline is expensive everywhere, but nowhere near as expensive as here,” First Air President and CEO Brock Friesen said as he defended his airline’s codeshare agreements alongside presidents of the other two airlines at Nunavut’s legislature.

“We can’t go back to the old days,” he said, citing growing costs in aircraft maintenance, fuel and infrastructure.

It was a stiff rebuff to the tone set early on by Nunavut Premier Peter Taptuna, who didn’t mince words in his opening statement.

“If the northern airline market cannot handle more than one company operating in a given region, you are basically asking for a monopoly,” said Taptuna.

Airlines executives admitted to “growing pains” in the new business model, but insisted that changes had to be done to account for operational costs in Nunavut — which they said are three-times higher than in the South.

“The status quo was simply not sustainable for either Calm Air or First Air,” said Calm Air President Gary Bell.

Calm Air took over all service in the Kivalliq region in July 2015, following its codeshare arrangement to sell seats on its aircraft with First Air.

“These changes have not been without some growing pains… resulted in cancelled flights, delayed departures and arrivals, medical samples not being flown out in a timely manner, delayed cargo and misplaced cargo,’ he continued.

Bell explained that when the codeshare agreement was implemented in July, unseasonable weather forced Calm Air to cancel hundreds of flights — resulting in a backlog of cargo and extended layovers in the early months.

“We got a lot of that worked out right before Christmas time,” Bell said, adding that the backlog is “materially resolved at this point.”

“The model we now have is the right model.”

And back-end improvements to booking systems and cargo management will smooth things out going forward, the airlines said.

“Effectively this month we have a new system,” Friesen said.

But the united front presented by the airlines didn’t stop an onslaught of questions levied by Nunavut MLAs over the course of the six-hour meeting.

“Who is really benefiting from split-revenues?” Baker Lake MLA Simeon Mikkungwak said on the codeshare agreement. “The airlines or the people?”

“We had to do something and this was the best thing we could come up with,” replied Canadian North President Steve Hankirk.

“Quite simply that was one of the worst money making routes in the history of the North,” said Friesen.

“The route itself has such weak economics… We’ve created a service that comes close to breaking even.”

First Air replied that route subsidization was common among all airlines, but some local service was simply too expensive for an airline to maintain.

“The strong have to help the weak. But the very weak have to go,” Friesen said, referring to First Air’s cancelled service to Naujaat.

Gjoa Haven MLA Tony Akoak asked executives if they felt they were part of the problem for the high cost of food in Nunavut.

“Out lowest margin is in the freight business,” agreed Bell, ““I don’t see a lot of potential change there in being able to reduce those costs.”

All three airlines said they were open to exploring new services and routes, but not at the cost of revenue.

“There will be further adjustments, provided they make economic sense,” said Friesen.

Canada’s federal Competition Bureau is still reviewing the airline’s codeshare arrangement, after meeting with the Government of Nunavut, the City of Iqaluit and the airlines last year.

The caucus meeting ended with Taptuna thanking the airlines for their answers, and in some cases “non-answers.”

Taptuna said he would follow up the meetings with a formal letter to each airline president, which he will also make available to the public.

MLAs return to Nunavut’s Legislative Assembly for their winter sitting scheduled to get underway Feb. 24.