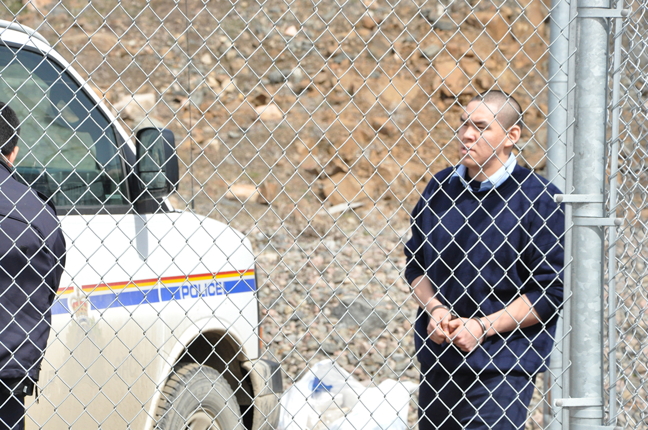 Police escort Peter Kingwatsiak of Cape Dorset to an RCMP truck during a break on day one of his first-degree murder trial in Iqaluit June 22, 2015. Justice Bonnie Tulloch has found him guilty on the first degree murder charge and guilty of aggravated assault on his uncle, in a judgement given Feb. 5. (FILE PHOTO)

Justice Bonnie Tulloch convicted Peter Kingwatsiak of Cape Dorset of first degree murder in the 2010 shooting death of his step-brother, Mappaluk Adla, Feb. 5 at the Nunavut Court of Justice in Iqaluit.

“I find the murder of Mappaluk Adla was both planned and deliberate,” Tulloch said in court.

But Kingwatsiak, 23, was not in court to hear the verdict.

About 20 minutes before Tulloch concluded her decision, Kingwatsiak, visibly agitated, abruptly stood up and said to the court police officer, “Let’s go, I want to go.”

After a brief discussion with the officer in Inuktitut, the officer placed handcuffs on Kingwatsiak, led him out of the courtroom — and Tulloch continued reading a summary of her 46-page decision.

In coming to her verdict, Tulloch said she carefully considered the testimony of four expert witnesses, four civilian witnesses, the two-day testimony of Kingwatsiak himself and the lengthy statement of agreed facts submitted by both Crown and defence lawyers prior to Kingwatsiak’s one-week trial in June 2015.

“The agreed facts tell a story of anger and jealousy on the part of the accused towards his step-brother,” Tulloch said.

Before the trial began, Kingwatsiak admitted to shooting Adla in the forehead at close range with a .22-calibre rifle while his step-brother slept in the early morning of Sept. 20, 2010.

The judge found Kingwatsiak’s anger and jealousy stemmed from his perception that Adla was pursuing Kingwatsiak’s ex-girlfriend, Gina Rose Lampron.

In the weeks leading up to the shooting, Tulloch concluded from testimony at trial that Kingwatsiak told numerous friends about his intention to shoot Adla.

Just 24 hours before the shooting, Kingwatsiak aimed a loaded rifle at his step-brother, the judge said.

And Tulloch said Kingwatsiak’s testimony at trial was neither reliable nor credible.

Kingwatsiak’s defence lawyer, James Morton, argued that Kingwatsiak was too intoxicated from gas sniffing and in too much emotional turmoil to have the capacity to form the intent of murdering Adla.

But Tulloch disagreed, pointing out that no other credible witnesses testified to Kingwatsiak being intoxicated immediately after the shooting.

“Even his testimony in chief was inconsistent,” Tulloch said, adding Crown prosecutors revealed many more inconsistencies in Kingwatsiak’s testimony during cross-examination.

For example, Kingwatsiak denied feelings of jealousy towards Adla when questioned at trial by defence lawyer James Morton.

But Kingwatsiak then admitted during cross-examination by Crown prosecutor Barry McLaren that at the time of his arrest, a message written in ink on Kingwatsiak’s forearm read, “Gina Rose, my one and only.”

Tulloch also found Kingwatsiak used court translators at trial to his advantage, complaining of inaccurate translations from Inuktitut to English.

“On numerous occasions, this court finds that the accused deliberately slowed down proceedings so that he could carefully consider what his answer to a question should be, rather than answering in a forthright and non-evasive manner,” Tulloch said.

A note written by Kingwatsiak and left in his Bible just hours before the shooting — which expressed hopelessness and concern for Lampron — showed that Kingwatsiak knew the consequences of the plan he’d formed out of jealousy and anger, the judge ruled.

“Sept. 20, 2010, was a very sad day in the history of Cape Dorset. It was the day when tragedy struck both the Adla and the Kingwatsiak families. The day when one young man took the life of another young man, causing unimaginable grief for those left behind,” Tulloch said.

“I have a lot of sympathy for the families and friends of both Mappaluk Adla and Peter Kingwatsiak.”

A video-conference to Cape Dorset set up in the courtroom showed about 15 people watching the proceedings from the south Baffin community.

When Tulloch reached the end of her verdict, those watching from Cape Dorset — mostly women — passed around boxes of tissues.

In the Iqaluit courtroom, none of Kingwatsiak’s family attended.

Tulloch also found Kingwatsiak, who was 10 days past his 18th birthday at the time of the offences, guilty of aggravated assault on his uncle, Manu Kingwatsiak.

Tulloch scheduled Kingwatsiak’s case to be addressed in court again on Feb. 29.

At that time a sentencing date will be set.

But before then, Tulloch said the court will conduct a security and risk assessment of the Cape Dorset community hall to determine if the sentencing hearing can be conducted in that community.

Under the Criminal Code of Canada, a conviction for first degree murder carries a mandatory sentence of life in prison, with no eligibility for parole until after 25 years.