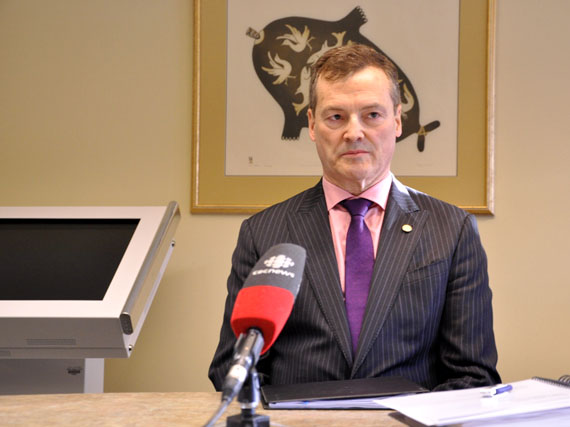 Nunavut Finance Minister Keith Peterson at a lockup with reporters prior to his Feb. 22 budget speech, during which he revealed that the GN will spend $1.981 billion in 2017-18. This was Peterson’s final budget speech prior to the Oct. 30, 2017 territorial election. (PHOTO BY THOMAS ROHNER)

In his final budget speech prior to the Oct. 30 territorial election this year, Finance Minister Keith Peterson said that, in spite of the nearly $2 billion the Government of Nunavut expects to receive in 2017-18, the GN faces a leaner future.

In the speech, given early in the afternoon Feb. 22, Peterson said the GN will receive about $1.981 billion in revenues during the next fiscal year and spend about the same amount, producing a tiny projected surplus of $2 million.

“To be able to present a balanced budget, I’m fairly happy with that. It’s still the largest budget in Nunavut’s history, so we’re keeping the programs going,” Peterson told reporters in a lockup prior to his speech.

But that’s based on a revenue increase this year of five per cent in transfers from Ottawa—and that annual rate of increase is coming to an end.

Peterson warned that from now on, the Trudeau government will increase its annual contribution to Nunavut under the Territorial Financing Formula, or TFF, over the next five years by only three per cent.

And at the same time, Ottawa has cut the Canada Health Transfer, or CHT, to a growth rate of only three per cent a year, down from the six per cent increases that territories and provinces have enjoyed for the past decade.

“For Nunavut, this slower growth reduces our flexibility, and our ability to deliver the programs and services that Nunavummiut need,” Peterson said.

At the same time, Nunavut is still heavily dependent on the largesse of the federal government.

This year, the GN will get 88.5 per cent of its revenues from Ottawa, mostly through the TFF and contribute only 11.5 per cent in money raised by territorial taxes and other sources.

“We will find our own way. But we are not there today. Our economy is not yet large enough to support the range of public services Nunavummiut deserve,” Peterson said.

And that, Peterson said, means that Nunavut must do everything it can to make its economy grow.

“We are going to need more jobs. Today more than 10,000 Nunavummiut are in school. When they graduate, they will need to find their way in life,” Peterson said.

To do that, he said Nunavut needs more from the federal government, in social housing, transportation infrastructure and better telecommunications.

As part of that, he made a big pitch for the Grays Bay road and port proposal, which the GN believes would unlock mining opportunities in the Kitikmeot region but requires a $500 million contribution from Ottawa before it can happen.

That road would be part of a longer $2 billion road stretching all the way from the Arctic coast to Yellowknife, which Peterson said could trigger $40 billion worth of development projects.

“An Arctic gateway to the world would significantly increase economic activity in Nunavut. But we cannot build it without federal government support,” he said.

And he said the GN would continue to press Ottawa for help building a road from Churchill to Arviat, Whale Cove and Rankin Inlet, and press for more money to build social housing.

He also slammed the federal government for its ban on offshore Arctic oil and gas drilling, a decision they made without consulting Nunavut.

“We cannot afford to have more surprises, like this ban on developing resources we consider to be our own,” he said.

He pointed out that spending on income support in Nunavut has increased by 60 per cent over the past six years and that “we need to break these chains of poverty.”

“We’re steady as you go. We’re not going to solve poverty overnight but the message is still getting out there: we need to help our vulnerable folks in the communities. We’re going to focus money on the education department because education is a way to help people get out of poverty,” Peterson said in the budget lockup.

The biggest chunk of the GN’s money, $353 million, will go to the Department of Health, a $12 million increase from the previous year.

Of that, $6.6 million will go towards a new quality of life secretariat, which will spend it on mobile trauma response, the Embrace Life Council, and a 24-hour crisis help line.

Other highlights in the budget are:

• $1.6 million to support nursing, including nurse mentoring and public health;

• $1.8 million for nine new RCMP members, one for each of Cape Dorset, Pangnirtung, Baker Lake, Arviat, Rankin Inlet and Gjoa Haven, and three for Iqaluit; and,

• $850,000 to improve education support services for kindergarten to Grade 12 students and their families.

With files from Thomas Rohner.