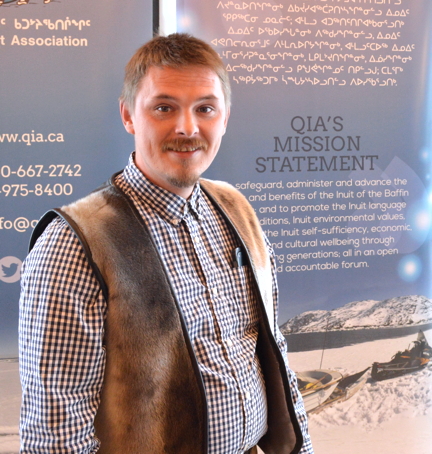 PJ Akeeagok, attending his first annual general meeting as president of QIA, said the Inuit organization plans to visit and consult with communities impacted by the Mary River mine in North Baffin prior to renegotiating a new benefit and impacts agreement with mine owner Baffinland Iron Mines Corporation. (PHOTO BY STEVE DUCHARME)

The Qikiqtani Inuit Association hopes to renegotiate its Inuit Impact and Benefit Agreement with Baffinland Iron Mines Corp. if the proposed Phase II of the Mary River mine gets a thumbs up by the Nunavut Impact Review Board.

Under the Phase II plan, the mining company would ramp up overland ore hauling on the 100-kilometre tote road between the Mary River iron mine site and the Milne Inlet port.

If approved, the company would also extend their sea-shipping season to 10 months of the year and would require icebreakers in the winter.

But Phase II is significantly different from what was originally proposed, the QIA says, and so impacts and benefits need to be re-examined.

“In our view, if Phase II were to be approved by NIRB, until the IIBA is either amended or renegotiated, the activity cannot go forward,” said assistant director of major projects Justin Buller at the QIA’s annual general meeting in Iqaluit Oct. 6.

“QIA’s view is stated for the record, and for the public, that the IIBA must be renegotiated prior to Phase II going ahead.”

Before the NIRB’s review of Phase II gets underway, the QIA will be visiting communities impacted by the Phase II — Hall Beach, Iglulik, Arctic Bay, Clyde River and Pond Inlet — according to a “community engagement strategy” resolution passed by the QIA board at the organization’s AGM.

The QIA plans to hold three to four events in each community, first to clarify the Phase II project to residents and then to consult them on related matters. The QIA will then summarize those consultations into a final report.

“We want to know what their concerns are. What are the issues that people think are going to come up with impacts to wildlife, access to hunting areas, issues with icebreaking or additional traffic on the tote road… this is how [the report] will form QIA’s stance,” said Buller.

Nunavut Tunngavik Inc. may also participate in the engagement strategy but that has yet to be confirmed.

“That’s where our voice is going to be, it’s going to come directly from Inuit, in particular the most impacted ones,” QIA President PJ Akeeagok told Nunatsiaq News.

“We’re planning to have a position before NIRB starts, so we’re hoping to get into the communities as early as November but that’s still to be finalized. We’re working hard to ensure that it starts immediately, knowing the enormity of the project,” he continued.

“We know it won’t be easy. We know the big changes being proposed will impact Inuit life within the communities, the culture, so there’s definitely a lot a stake.”

The QIA will also be pursuing a minimum Inuit employment goal with Baffinland, but disruptions in data delivery have made that figure tough to pin down. Communication with Baffinland, according to the QIA, has been improving.

The QIA expects the company to provide a revised report in November that will detail everything for the next year.

And the Inuit organization expects to deliver a hard number for Inuit employment during a joint executive meeting at the mine this January.

In September, Baffinland temporarily decreased wages for its Mary River workers by 10 per cent, citing lower demand for iron ore.

Under the current IIBA agreement between the QIA and Baffinland, the Inuit organization has received huge payouts that have substantially increased their financial clout.

Last year, the QIA received a $20 million payout from Baffinland as an initial payment on that IIBA.

In 2015, the QIA is still reporting a $5.5 million surplus due, in part, to the arrangement with Baffinland.

The QIA’s annual general meeting, the 40th in the organization’s history, was held Oct. 6 to Oct. 8 in Iqaluit.