Longer term plan to emerge from May summit meeting 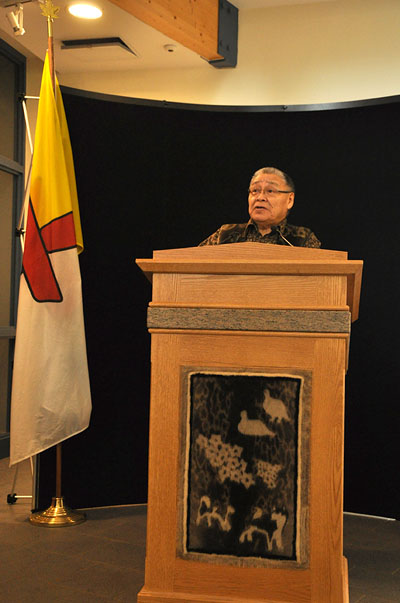 NTI vice president James Eetoolook at a press conference announcing a one-year suicide prevention action plan from the Government of Nunavut and three other organizations. (PHOTO BY THOMAS ROHNER)

But they also envision a longer-term plan that would emerge after a suicide prevention summit meeting scheduled for this May.

“A longer term plan will be produced from the summit,” Nunavut Premier Peter Taptuna said at the March 7 news conference.

Representatives of a four-member suicide prevention partnership — the Government of Nunavut, the Nunavut RCMP, Nunavut Tunngavik Inc., and the Embrace Life Council — held a news conference at the Legislative Assembly to reveal the one-year plan, entitled, “Resiliency Within: An action plan for suicide prevention 2016/17.”

The plan lists projects and programs under each of the eight original commitments the partners developed for their first suicide prevention plan released in 2011.

These include a continuum of care in mental health services, equipping youth to cope with adversity, additional research, and keeping Nunavummiut up to date on suicide prevention efforts.

“We need to find a balance between modern and traditional living. Collectively, we need to heal,” NTI Vice President James Eetoolook said at the March 7 news conference.

Eetoolook called for a return to the Inuit survival skills that allowed Inuit to live for thousands of years in the Arctic.

“We must reclaim that outlook, and make survival a priority,” the vice-president said.

Many of the initiatives in the action plan cite recommendations from the special coroner’s inquest into Nunavut’s suicide rates, held over two weeks in Iqaluit in September 2015.

But a longer-term action plan will emerge after organizers hold their suicide prevention summit in Iqaluit this May with researchers, members of the public and front-line workers.

Other recommendations drafted by the jury of the coroner’s inquest and incorporated into the suicide prevention plan include:

• a series of initiatives aimed at youths, including a pilot project for a youth mentorship program and funding for seven facilitator training workshops for a youth camp that fosters positive mental health;

• an initiative to collect more data on suicide attempts and completions, as well as to analyze student drop-out trends across Nunavut;

• a committing to develop a strategy to reduce incidents of child sex abuse and a commitment for greater funding to family violence facilities;

• a pilot grief support network to provide inter-generational counselling, including funding for community members to be trained and rent the space required;

• a number of initiatives aimed at connecting Inuit with traditional land-based activities, such as a trapper training and support program; and,

• an increase in funding to local wellness committees and alcohol education committees.

The plan released March 7 does not include any specific costs or spending commitments with the initiatives.

But Karen Kabloona, assistant deputy minister for quality of life, said the government has been given a green light to implement the plan beginning April 1.

“The budget has gone through Financial Management Board,” Kabloona said March 7.

That means that cabinet has approved the plan. The Financial Management Board is made up of cabinet ministers, but it’s chaired by the finance minister.

A supplementary appropriation bill will be introduced during the spring sitting of the legislature, at which time MLAs will get chance to ask questions about the prevention plan’s budget, Kabloona said.

Nunatsiaq News obtained a leaked draft of the suicide prevention plan before its March 7 release, which does assign costs to each of the initiatives.

The leaked draft shows that the GN plans to spend just over $5 million on suicide prevention plans in 2016-17.

But there are some significant differences between the leaked draft and the plan released March 7.

The single most expensive action in the leaked draft, for example, is more than $1.5-million for funding to local education authorities for a program that would bring more elders into classrooms.

That initiative does not appear in the March 7 plan.

Both versions of the plan say the GN will commit to reviewing operations at mental health facilities in Iqaluit and Cambridge Bay, and to develop operational plans for the facility in Rankin Inlet once that facility has been renovated.

But the draft plan goes one step further: In it, the GN had committed to spending $150,000 to conduct pre-planning for renovating Taloyoak’s old health centre into a youth addictions and treatment centre.