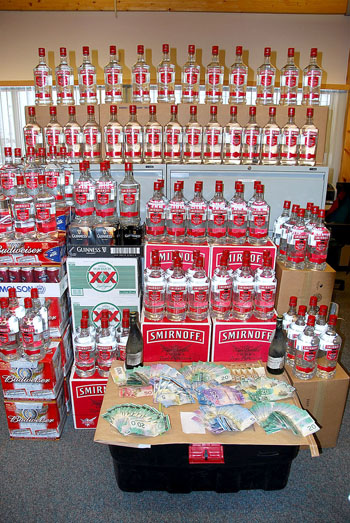 An inventory of Smirnoff vodka and beer seized in Iqaluit by police in March 2010, when four Iqaluit men were charged with keeping liquor for sale illegally. At the time, police alleged that four Iqaluit men living in the Plateau subdivision had legally acquired at least $235,000 worth of liquor and then put it up for sale illegally. The GN’s liquor task force estimates that about 50 per cent of legally acquired booze ends up re-sold illegally by bootleggers. To fix that they recommend a ban on the importation of alcohol from outside Nunavut and the creation of a GN monopoly over all alcohol sales. (FILE PHOTO)

After nearly 27 months of work, the 195-page final report of the Nunavut Liquor Act Review Task Force landed inside the Nunavut legislature Nov. 2 with a strong message for Nunavut MLAs: adopt a “harm reduction” approach to alcohol control through a government-owned liquor sales monopoly and a revamped Nunavut Liquor Act.

Finance Minister Keith Peterson set up the 11-member task force in February 2010 to advise the Government of Nunavut on how to write a new Nunavut Liquor Act.

They came back to him with a report that recommends a new liquor law that focuses on harm reduction, coupled with government policies aimed at changing Nunavut’s drinking culture.

And though they were hampered by a shortage of objective statistical data, the task force concluded that alcohol inflicts fearful damage on Nunavummiut.

“During the consultation meetings the Task Force was reminded over and over again about the harm and hurt that alcohol misuse causes in every community,” the report said.

To fix that, the task force makes numerous recommendations.

Many are aimed at reducing binge drinking and “stamping out bootlegging.”

Here are some highlights:

• where approved by a community, allow the GN to open licenced, government-owned beer and wine outlets, while taking steps to restrict access to hard liquor;

• ban the import permit system for purchasing alcohol products from outside Nunavut, with some exceptions for specialty products;

• establish a GN monopoly over the import, sale and distribution of all alcohol products in the territory;

• within the new GN-controlled monopoly, impose strict per-person purchase limits in those communities where unrestricted alcohol possession is allowed;

• a suggested purchase limit: one 1,140-ml bottle per month, per person of hard liquor in unrestricted communities;

• in communities with retail beer and wine outlets, a daily purchase limit of 12 beers and one 750 ml bottle of wine, or two bottles of wine to a maximum of 1,500 ml;

• for anyone who buys liquor from a GN monopoly liquor outlet, disclose their name and the amount of their purchase to the RCMP under a mandatory information disclosure system;

• prohibit alcohol everywhere in Nunavut except where designated otherwise, making it illegal to drink on the land outside a community’s boundaries;

• require that every Nunavut community develop an alcohol strategy;

In its consultation work, the liquor task force found many differences of opinion among Nunavut residents and little consensus.

“Some people are calling for prohibition throughout the territory, while others want to liberalize the liquor laws,” the report said.

To resolve the “compelling arguments” made by proponents on all sides, the task force settled on a policy model that is “principally aimed at curbing alcohol-related harm while also serving the needs of the responsible consumer.”

In attempting to develop an evidence-based approach, the task force encountered many gaps in the available data.

For example, they noted that the 2007-08 Inuit Health Survey found that 59 per cent of adults reported drinking in the 12 months prior to the survey and that that men are more likely to drink than women.

But because the data on binge drinking from the survey was never published, it “does not provide us with a clear picture of how people drink.”

However, the task force used anecdotal evidence from their consultations to conclude that binge drinking is common.

“Frequently, community workers advised the Task Force that binge drinking is a common characteristic of drinking patterns in their communities,” the report said.

The report noted that some people in Nunavut do not actually know how many units of alcohol consumed per person can lead to intoxication.

They also cited a group of high school students who thought the consumption of alcohol by pregnant women has no effect on the fetus.

As for bootlegging, the task force found that local bootleggers feed on the the binging habits of their illegal customers.

And the task force reports the following numbers related to bootlegging:

• according to the Nunavut Liquor Commission, about 50 per cent of hard liquor sold by the commission is re-sold illegally;

• the economic value of bootlegging is at least $10 million a year, but this is likely an underestimate because it does not include the illegal sale of liquor transported to Nunavut from other jurisdictions, including via sealift;

Noting that bootleggers are universally vilified throughout Nunavut as profiteers, the task force recommends a Nunavut government monopoly on all liquor sales is the best way to stamp out bootlegging.

To that end, they reject any privatization of the system, including the sale of beer and wine in private retail stores.