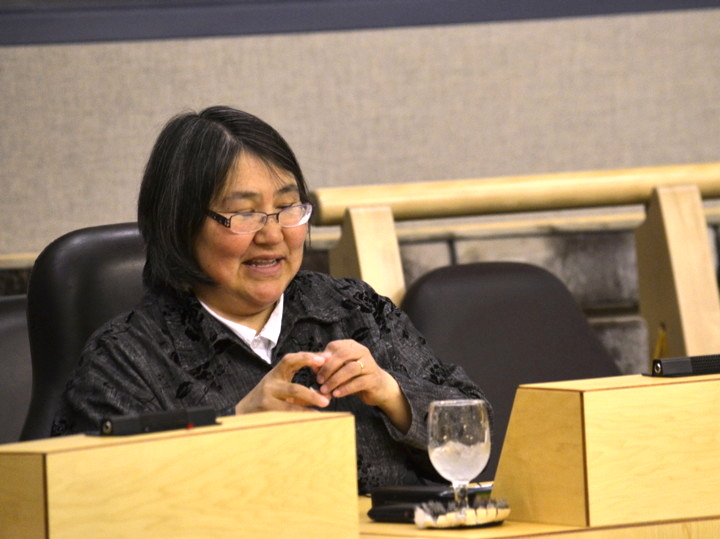 Family Services Minister Jeannie Ugyuk said community consultations on the territory’s social assistance programs have been delayed by weather but her department hopes to complete visits by the end of November. (FILE PHOTO)

The Government of Nunavut expects to complete its review of social assistance programs in the territory by year’s end and to have the results of that review presented in the winter legislative session.

That’s according to Family Services Minister Jeannie Ugyuk, who spoke about the review in a minister’s statement and during question period in the Nunavut legislature Oct. 28.

The review is based, in part, on a series of territory-wide community consultations which the Government of Nunavut launched in September.

Weather, according to Ugyuk, has prevented officials from reaching five of the remaining communities on the schedule, but the plan is to complete the visits in November.

“The community engagement process has provided an opportunity for us to identify ideas and actions to change social assistance and to better support Nunavummiut through training, career development, employment, economic opportunities and labour market participation,” she said in her Oct. 28 statement.

Approximately 40 per cent of Nunavummiut rely on some form of social assistance, according to a GN commissioned report from 2013.

Baker Lake MLA Simeon Mikkungwak asked the minister Oct. 28 to clarify whether the new policies will pressure recipients to go back to school or get jobs.

“There are often limited opportunities for certain individuals to reduce their reliance on income assistance, while at the same time the price for food, clothing and other necessities continue to rise,” said Mikkungwak.

Ugyuk was unable to respond fully since the review is still ongoing but added that funding was now available for the GN to conduct consumer price surveys of food in the territory. She said that information will be factored into the review.

“In previous times we did not know that [we had funding] but we are keeping track of [food prices] now as a government and also as to how Inuit are helped through social services and also through social housing. All that is under review,” said Ugyuk.

Mikkungwak also asked whether the minister will consider increasing any of the current social assistance allocations.

Ugyuk provided no firm number but did confirm that many services — including elder subsidies and their fuel benefits, as well as daycare and child benefits — were currently under review.

“In December, the poverty reduction group will be meeting about social assistance. There a lot of things that need to be done but more information will be provided at the later time,” she continued.

The Nunavut Roundtable for Poverty Reduction is a venue for businesses, organizations, government officials and citizens to discuss the impact of poverty, particularly on children, in the territory.

Reform of Nunavut’s social assistance programs are one component of the current government’s Sivumut Abluqta mandate.

The operational objective calls on the GN to gather and evaluate more data on its programs to better serve Nunavummiut.

According to its 2013-14 budget, the department of family service spent an estimated $44 million on income assistance in Nunavut. That ate up nearly 40 per cent of its $112 million budget that year.