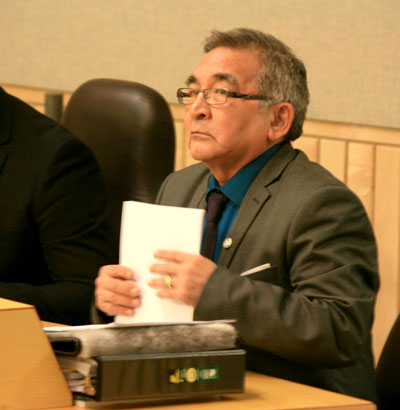 Alexander Sammurtok, MLA for Rankin Inlet South, in Nunavut’s legislative assembly March 2, lines up to submit a petition from his constituents in favour of a 24-hour elders’ care facility in Rankin Inlet. (PHOTO BY PETER VARGA)

Nunavut may have the smallest proportion of seniors in the country but Alexander Sammurtok, the MLA for Rankin Inlet South, wants to be sure the territory is ready to accommodate the territory’s growing elderly population with a full-service 24-hour facility.

To that end, Sammurtok submitted a petition to the government, signed by 142 members of his constituency, requesting the Government of Nunavut “open and operate a 24-hour elders’ care facility in the community of Rankin Inlet.”

The territory’s growing population of elders aged 65 and over suggests a need for greater protection of their health, safety and well-being, Sammurtok said March 2 in Nunavut’s legislative assembly.

“Our elders can quickly become vulnerable, especially as their health weakens, and they can no longer be self-reliant or handle the tasks of daily living,” he said.

Health Minister Paul Okalik, confirmed the government is carrying out a needs assessment study for the proposed facility.

“We know that there is an increasing number of elders [in Nunavut] and that the lifespan of Inuit is getting longer,” Okalik told Sammurtok.

The government approved financing for the needs assessment study, which “is going to be a step towards establishing a long-term care facility for elders,” Okalik said.

Sammurtok told the members of the legislative assembly that Nunavut had a total of 1,244 elders in 2013.

That proportion is expected to grow in the future.