“We want women to be able to report harassment and feel safe, that it’s OK to report it” 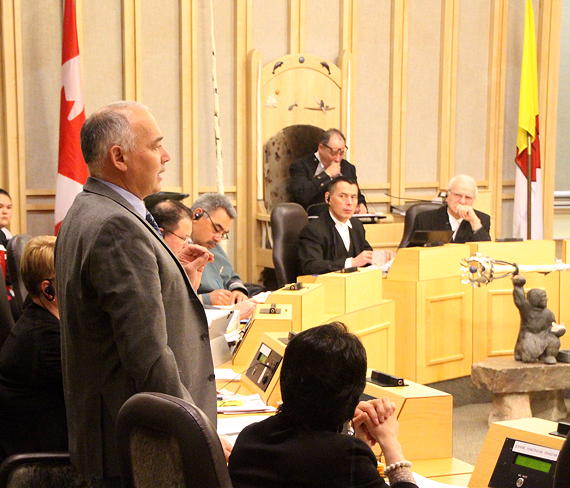 Premier Joe Savikataaq says on Tuesday, Oct. 23, that a review of the Government of Nunavut’s harassment policy will get underway in the new year, around the same time as a stand-alone human resource department splits off from the Department of Finance. (PHOTO BY BETH BROWN)

An internal panel composed mostly of women who work at the Government of Nunavut will review the GN’s policy on workplace harassment, says Nunavut Premier Joe Savikataaq.

Women who serve as deputy ministers, human resources experts and Inuit Qaujimajatuqangit coordinators will make up most of the members of the working group that will look at the policy, Savikataaq said on Tuesday, Oct. 23.

“We want women to be able to report harassment and feel safe, that it’s OK to report it and that it will be dealt with in a proper and timely manner,” he said. “We have to have the women’s view. As a guy I have a hard time getting the women’s view in there. It’s different.”

These remarks came in response to a question from Arviat North–Whale Cove MLA John Main, who asked what the timeline would be for the review that Savikataaq announced Oct. 11 on the International Day of the Girl.

“The timeline would be to coincide with the separation of HR [Human Resources] from Finance as a standalone department,” Savikataaq said.

The GN’s new human resource unit, now part of Finance, will start acting as a stand-alone department early in 2019, he said.

“All policies in there will be enhanced and examined at the time,” he said.

The harassment review will ensure that the GN’s policy provides the support and resources needed for women who experience inappropriate behaviour or sexual harassment, Savikataaq said when he announced the review.

“This is a very important issue. No matter where we are, we have to have good treatment of women,” Main said.

A move to review the policy comes on the heels of Iqaluit Mayor Madeleine Redfern’s statement to a House of Commons hearing last month about abuse and sexual harassment faced by Nunavut women at the hands of male leaders and public officials.

In a member’s statement that came prior to the premier’s statement about the harassment review, Iqaluit Manirajak MLA Adam Arreak-Lightstone highlighted the work done in Iqaluit in September by the ongoing Inquiry into Missing and Murdered Indigenous Women and Girls.

“Too many families in Nunavut suffer from domestic violence and sexual abuse,” Lightstone said. “Unfortunately, both have a stigma associated with them and are difficult to talk about.”

Ending that stigma is “our responsibility” Arreak-Lightstone told the house, adding that he is glad to see efforts made by the current government to address violence against women in Nunavut.