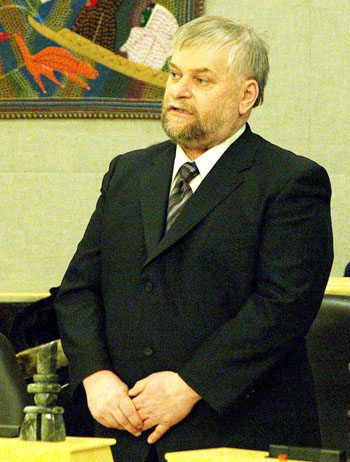 Nunavut premier Eva Aariak announced March 11 that she has stripped Baffin South MLA Fred Schell of all ministerial portfolios after being told of allegations that Schell has “acted in conflict of interest and abused his authority as minister.”

In the interview, Aariak said she acted on a report she received from officials within the Government of Nunavut’s Department of Justice.

And in response to that information from the justice department, Aariak said she has asked the secretary to cabinet, Daniel Vandermeulen, to refer the matter to Nunavut Integrity Commissioner Norman Pickell.

She did not, however, comment on whether the allegations of conflict of interest and abuse of authority cited in her statement relate to Schell’s business interests in Cape Dorset.

Schell, reached March 11 at an apartment he maintains in Iqaluit, told Nunatsiaq News that he has retained a lawyer and that he will continue to serve as a minister without portfolio.

He said he first heard of the decision on the evening of March 8 from Vandermuelen and from Paul Crowley, Aariak’s principal secretary. On March 9, he received a formal letter, Schell said.

“I don’t know what she’s [Aariak] got. I heard it’s something that came out of the justice department,” Schell said.

Other than that, Schell said “he has no comment at this time.”

Schell is the owner of Polar Supplies Ltd., a general contracting firm in Cape Dorset that has been embroiled for several years in a series of court actions against the Hamlet of Cape Dorset.

Schell’s interest in Polar Supplies has been managed within a blind trust since Jan. 1, 2010. Under the blind trust, Garth Wallbridge, a Yellowknife lawyer, is in charge of the business while Cheryl Constantineau serves as operations manager in Cape Dorset.

This past October, Pickell found Schell, when he still served as a regular MLA in 2009, and before he had put his business into a blind trust, put himself into a conflict of interest by sending a threatening email to certain GN employees.

The email attempted to influence officials into making a decision favourable to Schell’s business interests, Pickell found in his report.

That integrity commissioner report had been generated in response to complaints filed earlier in 2011 by Janet Slaughter, who then served as deputy minister of justice.

MLAs then decided to slap Schell with a $1,000 fine, but also voted to put him in cabinet.

“Mr. Speaker, my actions were inconsistent with my responsibility to arrange my private affairs in a manner that promotes public trust and confidence. I apologize for these actions,” Schell said on Oct. 31, 2011.

Schell will now sit as a minister without portfolio.

“To hold ministerial portfolios in the executive council is a position of utmost trust and privilege, and it is my responsibility to ensure that the Executive Council is held to the highest standard,” Aariak said.

“At the discretion of full caucus, Minister Schell will continue to sit on the executive council. His portfolios have been reassigned.”

Under Nunavut’s non-partisan system, the premier does not have the authority to remove cabinet ministers from office. Cabinet ministers are elected, or removed, in votes conducted by MLAs.

Kugluktuk MLA Peter Taptuna will now serve as minister responsible for the Nunavut Housing Corp. and Arviat MLA Dan Shewchuk will regain responsibility for the Department of Human Resources.

Aariak said recent confusion over the status of a new administrative audit on the Nunavut Housing Corp. was not a factor in her decision to discipline Schell.

In the legislative assembly session that ended March 8, Schell startled many observers when he said the federal government won’t give any more social housing construction money to Nunavut unless the Nunavut Housing Corp. does a second audit of the corporation.

That, according to Schell, is because federal officials aren’t convinced Nunavut has done enough to fix the problems that led to $110 million in cost over-runs within two recent social housing construction programs.

“I have never seen anything written originating from the federal government with respect to that issue,” Aariak said.

Schell last week said the administrative audit, to be done by Deloitte and Touche, will look at administrative issues and will not deal with financial issues already covered in previous audits. It has the support of the housing corporation’s board, Schell said.