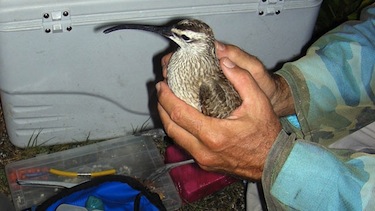 This whimbrel Chinquapin is reportedly resting in the Caribbean after flying through Hurricane Irene during his long migration south from Nunavut to Brazil. (PHOTO HANDOUT FROM GEORGIA DEPT. NATURAL RESOURCES)

A plucky shorebird on its way south from Nunavut’s Southampton Island made headlines this week in the United States when it survived a flight through Hurricane Irene, the same storm that caused New York City to shut down for a day.

Whimbrels are long-beaked brown shorebirds, which spend their summers in Nunavut where they seek out wet lowlands and shores.

Nine days ago, on Aug. 22 a whimbrel – dubbed Chinquapin by the team that tagged the bird in 2010 — started off Aug. 22 on his annual, 4,000-plus kilometre journey to the mouth of the Amazon in Brazil, traveling at speeds of up to 80 km an hour.

Chinquapin’s travels have been tracked since May, 2010, when researchers in the southern U.S. fitted him with a tiny radio transmitter.

Since then, biologists at the Center for Conservation Biology in Virginia have been following Chinquapin’s path — and they were nervous last Wednesday when the bird flew right through the dangerous northeast section of the hurricane.

But on Saturday, their tracking showed Chinquapin was resting on Eleuthera Island in the Caribbean.

Whimbrels are “capable of really amazing migration flights” of up to 5,600 km without a rest, according to Bryan Watts, director of the College of William and Mary’s Center for Conservation Biology.

“[But] it’s sort of bad to hit a big storm at the end of a flight that long,” Watts told USA Today.

Before Chinquapin set off from Nunavut, he had likely doubled his weight, which helped provide him with enough energy to fly through the hurricane.

But it’s still a mystery to biologists how Chinquapin managed to stay his course: other migratory birds have been known to die or lose their way when travelling through a storm like Hurricane Irene, with its winds of 175 km/h.

In 2010 this same bird flew around Tropical Storm Colin while a second bird flew into the storm and did not survive.