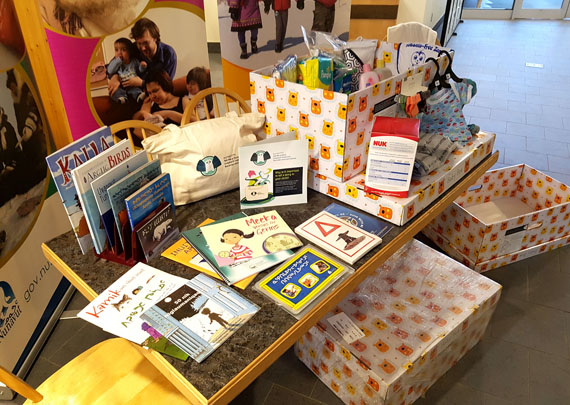 The GN’s baby boxes, introduced in 2016, include a selection of children’s books, clothing, baby and maternal care products and education material. The box itself is approved by Health Canada as a safe sleeping space for infants, too—but the baby boxes haven’t yet lowered the infant mortality rate in Nunavut. (FILE PHOTO)

That’s due to factors such as bed sharing, infections, smoking by parents, genetic tendencies to develop dangerous low blood-sugar levels and some potentially life-threatening birth defects that are more common in Nunavut.

But curbing tobacco use, something Barker said “we can all do,” would be the number one action that would help keep babies from dying.

Maternal smoking before a baby’s birth can lead to a lower birth weight and prematurity, among other things, putting babies more at risk of infections. Smoking around infants can also increase the likelihood of them contracting infections.

Since 2015, the territory’s infant mortality rate—that is, the number of babies who die before their first birthday—has increased.

While acknowledging that this is true, Barker said it doesn’t take a large number of deaths to make Nunavut’s rate rise or vary from year to year. That’s due to the small population and the way that statistics are calculated, per 1,000 births, which is more than the number the territory sees in a single year.

Barker said she’s hopeful the infant mortality rate this year will be lower, as some of the public health messages given out to parents start to kick in.

Meanwhile, Canada’s infant mortality rate has remained stable at approximately 4.5 deaths per 1,000 live births since 2006, notes a recent report from the University of Calgary’s O’Brien Institute of Public Health.

If you look at Statistics Canada data for infant mortality in Nunavut, you can see that for baby boys, the death rate is higher than that for baby girls.

Overall, the rate at which babies die is often used as a general indicator of the level of health in a country, and Nunavut’s infant mortality rate are now closer to what you would find countries such as Bulgaria, Mexico or Thailand.

The reasons for this increase in Nunavut’s infant mortality rate is likely linked to the serious problems that surfaced in research published more than five years ago in the BMC Pediatric Journal.

In 2012, to determine the causes of and potential risk factors for infant mortality in Nunavut, a group of researchers, including Nunavut’s former chief coroner, Padma Suramala, reviewed all infant deaths documented by the Nunavut chief coroner’s office and the Nunavut Bureau of Statistics between 1999 and 2011.

Their research pointed to a serious risk factor for infant deaths: bed-sharing, especially where babies may have infections or a tendency for low blood-sugar levels, or their parents smoke or have “impaired arousal.”

Many Inuit mothers prefer to share their bed with infants, the research noted.

The research paper’s authors acknowledged that “advising against bed-sharing under all circumstances may not be easily accepted,” although when combined with risk factors such as sleep position, it may play a role in these deaths.

They stated there is a need for “improved safe sleep messaging in Nunavut.”

Results from surveys of Nunavut mothers suggested then that only about four in 10 mothers placed their infants to sleep on their backs, compared to nearly eight in 10 in the rest of Canada.

In Nunavut, this research was followed two years later by an advisory suggesting Nunavut parents make sure their babies sleep on their backs.

Then four years later, in 2016, the Nunavut government rolled out its plan to send baby box care packages to all newborns to cut infant mortality rate as has been done in Finland.

Now Nunavut calls these “baby beds.” Barker said. These boxes can be used until babies are about six months old.

Barker said health workers in the communities also talk a lot to young parents about the “ABCs” of putting babies to sleep: alone, on their back, and in a crib.

The 2012 research also suggested an association between a gene variant and unexpected infant deaths in Nunavut, which could represent “a complex interaction of the variant with environmental risk factors including sleep position, bed-sharing, prenatal and postnatal tobacco smoke exposure and food security.”

As discussed again last month in Copenhagen at the International Congress on Circumpolar Health, seven in 10 infants in the Kitikmeot and Kivalliq regions of Nunavut and about half of the babies from the Baffin region are born with a variant of the CPT1A gene that instructs the body to produce an enzyme that helps the body process fats for energy.

Medical researchers believe this enzyme’s variant probably offered an advantage to people who first migrated to North America from Siberia, when their high-fat diet would have favoured a different kind of metabolism that used fats, rather than sugars, for energy.

But today, about one in 300 people with this enzyme variant develop severely low blood-sugar, or hypoglycemia, when they are sick or not eating properly.

And that form of CPT1A—also found in Alaska, Nunavik and Greenland—can lead to severe complications. These may become worse during illness, with effects that range from seizures to sudden unexpected death.

Researchers believe the CPT1A variant could also be associated with the overall high mortality of infants from one month to one year old in Nunavut. Infants with this variant face a mortality rate in the territory that’s nine times higher than the national average.

In B.C., medical guidelines and information have been already developed to provide more First Nations parents with the information they need about this variant, which many of them also carry.

B.C. guidelines for health workers say parents should be given an emergency letter to present to emergency personnel, because infants and children with the CPT1A variant who are unable to eat may need an intravenous dextrose solution to prevent dangerously low blood-sugar levels from developing.

But you don’t see these handouts in Nunavut.

Barker said since so many carry the gene variant the Health Department offers the advice to everyone.

As for the prevalence of birth defects, these include a high number of heart defects that are nearly four times more frequent than expected in Canadian populations.

A 2004 study suggested that genetic predisposition to specific heart defects, and a diet low in folic acid and vitamin A in conjunction with alcohol intake, could be linked to these heart defects.