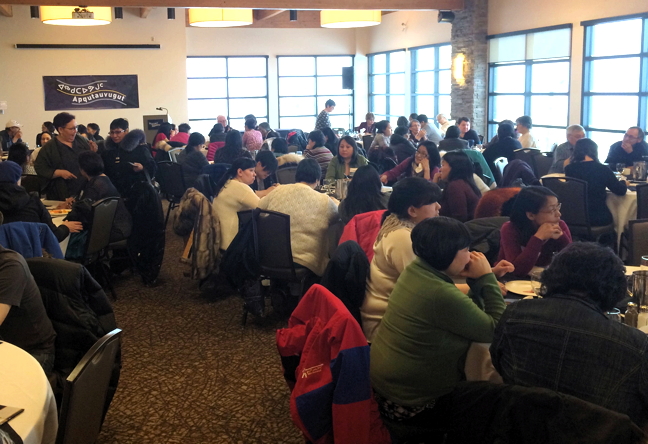 Dozens of Nunavut interpreters and translators gather for a conference in Iqaluit in mid-February. The group drafted 11 recommendations to the Nunavut government’s language authority, Inuit Uqausinginnik Taiguusiliuqtiit, in the hopes of standardizing language, training and compensation, among other things. (FILE PHOTO)

Those priorities, and others, are outlined in a series of recommendations drafted at an Inuit Uqausinginnik Taiguusiliuqtiit-sponsored conference held earlier this month.

That conference, entitled Apqutauvugut, or “we the path,” took place Feb. 8 to Feb. 12 at Iqaluit’s Frobisher Inn.

“Translators are extremely important. The means to communicate from one language to another — these people play an extremely important role in Nunavut,” said IUT executive director and Apqutauvugut emcee Jeela Palluq-Cloutier, on the first day of the conference.

Interpreter-translators from across Nunavut participated in workshops during the conference, heard lectures, and weighed in on how the industry ought to evolve.

And, on the final day, 11 recommendations were compiled for the Government of Nunavut.

The recommendations call on the GN to overhaul the accreditation process for translators in the territory, create an association to monitor the industry and develop further training for students studying the trade.

Elias, now a freelance translator and teacher at Nunavut’s Arctic College in Kugluktuk, believes many students graduating from the translator program aren’t prepared to enter the workforce.

“They don’t practice in [the translator] booth, doing simultaneous translation in a public meeting, or the transliteration of something. It’s a totally different skill set once you become the mouthpiece,” she told Nunatsiaq News.

Those attending the conference also called for a comprehensive database of Inuktitut terms easily accessible for translators to consult.

Coincidently, IUT has struggled to build such a database and its lack of productivity became the focus of a standing committee hearing at the Nunavut Legislative Assembly last year.

Conference-goers were less definitive when it comes to a unified Inuktitut writing system, another project on which the IUT had hoped, but so far failed, to make progress.

According to the recommendations, interpreter-translators at the conference support more consultation about the unified writing system, combined with continued support for all dialects.

They also want the GN to hold regular terminology workshops on specific topics.

The conference was the first of its kind since 1998 and participants asked that meetings be held on a more regular basis.

• develop an association of interpreter-translators;

• continue to support all dialects;

• continue to consult about a unified writing system;

• develop a comprehensive database of terms that includes all terms developed to date and is regularly updated and easily accessible online;

• provide support to interpreter-translators who are running their own businesses;

• develop further training and accreditation for interpreter-translators in Nunavut;

• provide support to young interpreter-translators so that it will be seen a a desirable career; and,

• develop standard per word and per page pay rates.

An IUT spokesperson was not available to comment on the recommendations.