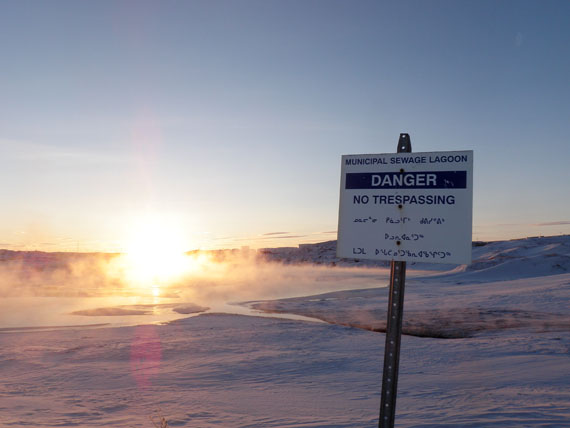 Iqaluit’s sewage treatment system will get an upgrade, thanks to federal spending announced Sept. 6. (FILE PHOTO)

Sometimes when it rains, it pours.

The federal and territorial governments announced Sept. 6 that they’ll contribute a $68-million infusion into Nunavut’s leaky water and sewage treatment infrastructure, a joint news release from the Government of Nunavut and the Government of Canada said.

Ottawa will fork over about 75 per cent of those funds, with Nunavut communities and the GN making up the difference, according to the release.

The affected projects are located in Iqaluit, Arviat and Chesterfield Inlet.

Projects in those three Nunavut communities have already been approved under the new Clean Water and Wastewater Fund, part of the Liberal government’s massive 10-year infrastructure spending program.

The three projects, set to receive $36 million from Ottawa, are:

• Iqaluit, which will receive nearly $19.9 million retroactive to April 1 for upgrades to its wastewater facility;

• Arviat, which will receive $15.75 million for a new water treatment facility and an expanded reservoir; and,

• Chesterfield Inlet, which will receive just over $1 million in 2017 for upgrades to its water treatment facility.

The City of Iqaluit and the Nunavut government will contribute $6.62 million to upgrading its sewage treatment facility, bringing the total spending on the project to about $26.5 million.

That’s how much councillors learned in June 2015 it would cost to bring the city’s sewage treatment system into regulatory compliance.

“This funding will fortify the infrastructure of the city’s wastewater treatment plant, ensuring the safety and integrity of this essential service for our citizens, now and for decades to come,” Iqaluit Mayor Madeleine Redfern said Sept. 7 in a news release.

“This funding will help the city bring us into compliance with our water licence and ensure that the city is able to bring our wastewater treatment plant up to standards,” Iqaluit’s chief administrative officer, Muhamud Hassan, said in the same news release.

Meanwhile, the western Nunavut community of Arviat has outgrown the capacity of its water supply.

The hamlet will kick in $5.25 million for a new water system and an increased reservoir, bringing the total cost of that project to about $21 million.

The Sept. 6 statement did not say how the remaining $32 million of the $68-million agreement will be spent or which Nunavut communities will benefit.

Nor did the statement say exactly when the funds will be spent.

Federal Infrastructure Minister Amarjeet Sohi said in the statement that the funds will address “specific infrastructure priorities in Nunavut communities.”

His territorial counterpart, Joe Savikataaq, said, “This new agreement will help us target critical safe water and wastewater projects to increase the impact of our capital investments.”

Phase one involves $11.9 billion in funding aimed at green and social infrastructure projects across Canada as well as public transportation systems, the Sept. 6 statement said.

Details of the second phase of Investing in Canada will be released in the coming months, the statement said.