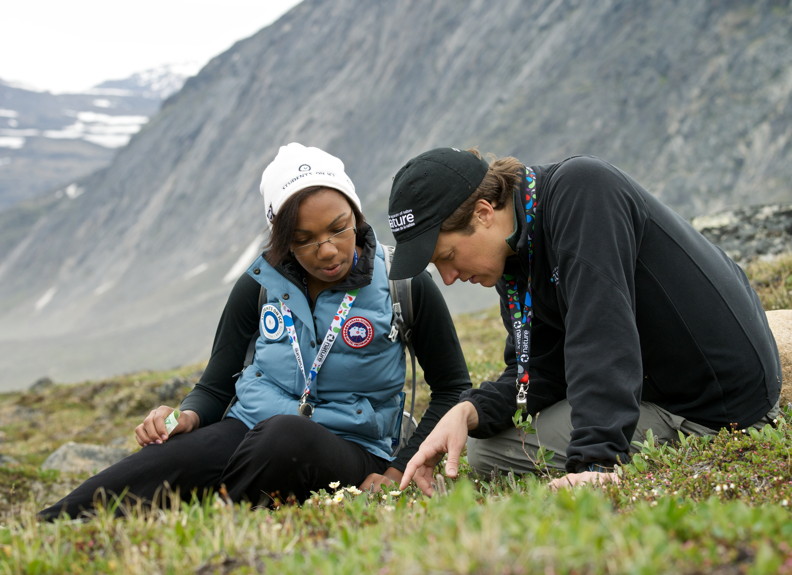 Students on Ice participant Elianny Hernandez, left, gets a botany lesson from Canadian Museum of Nature educator and botanist Roger Bull near Pangnirtung. Parks Canada has announced it will sponsor 13 northern aboriginal students for each of the next three years to participate in the Students on Ice program. (PHOTO BY MARTIN LIPMAN)

Parks Canada will sponsor a group of northern aboriginal students to join Arctic educational expeditions with Students on Ice.

In a three-year agreement with Students on Ice, Parks Canada will sponsor 13 new students every year, at $150,000 yearly, to take part in a north-south Canadian exchange program, and an international Arctic expedition.

“Through this unique initiative, Parks Canada is supporting youth and Aboriginal leadership development and building connections between northern and southern Canada,” Parks Canada stated in a news release, April 14.

The 13 students will include seven selected from northern Canada and six from the South.

Parks Canada will hire the northerners on summer jobs in national parks located in the Northwest Territories, Nunavut, Labrador and Northern Manitoba. The six southerners will take on summer positions in Montreal, Toronto and Vancouver.

The group of 13 will come together on a Students on Ice expedition to the Arctic. This year’s trip will be a ship and land-based expedition to the eastern Canadian Arctic and western Greenland, July 9 to July 24, which will include a tour of the Torngat Mountains National Park in Labrador.

As participants of the Students on Ice program, the students will create a project “to reach out and connect with Canada’s youth through videography and other social media,” Parks Canada stated.

As summer employees of Parks Canada, the youth will also have a chance to promote the Arctic to parks visitors.

“Through projects like these, Parks Canada seeks to better connect with young Canadians and share the treasures of our collective heritage with the next generation,” the federal agency stated.

“Through this initiative, our government is contributing to the development of future youth and northern Aboriginal leaders, helping to build bridges between northern and southern Canada, and increasing connection among Canada’s youth to Parks Canada’s special places.”

See Parks Canada’s website for more information and to apply.