“I regret that error, but I’m owning up to it” 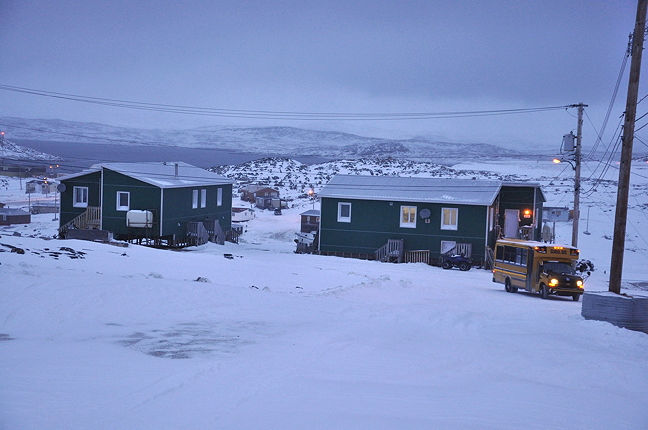 Cape Dorset: the inquest into the 2012 death of three-month-old Makibi Olayuk Akesuk is expected to wrap up today after testimony this week from a number of witnesses, mostly healthcare professionals. (PHOTO BY THOMAS ROHNER)

The pathologist who performed three-month-old Makibi Olayuk Akesuk’s autopsy in 2012 made “an error in judgment” when he concluded the infant died of a common virus infection, the jury of a coroner’s inquest into the baby’s death heard Nov. 24.

“I own up to that error. I regret that error, but I’m owning up to it,” Joseph de Nanassy, a pediatric pathologist at the Children’s Hospital of Eastern Ontario, told the six-member jury at the Cape Dorset Community Hall.

De Nanassy, after being asked to reconsider his findings by Nunavut’s chief coroner in 2015, decided Baby Makibi “likely” died of Sudden Infant Death Syndrome, or SIDS—a category of death assigned when no known cause can be determined.

And two other pathologists have since independently confirmed a finding of SIDS, the jury heard on the third day of the inquest Nov. 24.

The third day of the inquest, scheduled to wrap up Nov. 25, featured testimony from two pathologists who spoke about the likely cause of Baby Makibi’s death.

Over the first two days of testimony, the jury heard how the on-call nurse breached GN protocol in refusing to see the baby hours before he died and how the young parents were made to feel like they were responsible for their baby’s death by Chief Coroner Padma Suramala.

Suramala initially told the parents, Neevee Akesuk and Luutaaq Qaumagiaq, that their baby died of SIDS, in part because they had put their baby to sleep on his stomach.

But that was based on preliminary results and the limited medical reporting of the on-call nurse, Debbie McKeown, the inquest heard.

Then, two months later, de Nanassy concluded the baby died of a “widespread” infection in both lungs by a virus called cytomegalovirus, or CMV.

De Nanassy said his findings were supported by examining microscope slides of lung tissue which he thought showed the virus was present throughout the baby’s lungs.

It turns out, de Nanassy said, he mistook the breakdown of red blood cells in the stained and preserved lung tissue for the virus—both look granular under the microscope.

Chris Milroy, director of pathology at the same hospital where de Nanassy works, came to the same conclusion when Suramala asked him to review de Nanassy’s 2012 results.

“There was no CMV infection,” Milroy said, adding there was no question in his mind about it.

That was the same conclusion reached by a pathologist in Manitoba, named Susan Phillips, who was asked by Suramala to review de Nanassy’s results as well.

One of the reasons Milroy said de Nanassy’s initial results were wrong is because de Nanassy was looking at the wrong type of cells, where the virus wouldn’t be found.

And there was no other known cause of death found, Milroy said.

To make matters more confusing, de Nanassy said further tests in 2015 proved Baby Makibi did have the virus, but not at levels high enough to cause death.

Both pathologists agreed that adults and infants can have the common virus without showing any symptoms or needing any treatment.

Another doctor from the Ottawa-area hospital, Charles Hughie, its director of infectious diseases, testified Nov. 23 that the virus is so common, about half of infants have the virus and 80 to 100 per cent of adults do as well.

But only a small number of those who have the virus—about 10 per cent—show any symptoms, Hui said.

Babies with those kinds of compromised immune systems are “very, very rare. Somewhere in the order of one in 10 million births,” Hui said.

But SIDS is still a mysterious cause of death, Milroy said.

“We absolutely don’t want to blame the parents for the children’s death because we don’t know why they’ve died.”

Milroy is scheduled to continue his testimony Nov. 25, along with Ontario Chief Coroner Dirk Huyer, before the jury retires to consider its verdict.