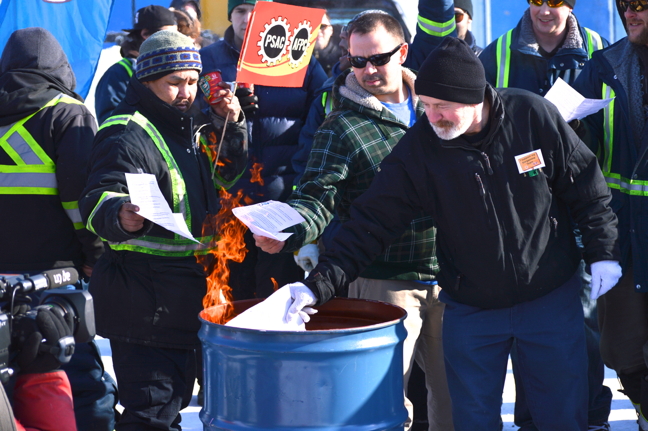 “We’re not impressed with our employer’s intimidation, and we’re not going to take it,” Nunavut Employees Union President Bill Fennell said before Iqaluit city workers took turns casting recent wage-freeze letters from city administrators into a burning fuel drum. About 50 city staff stood outside Iqaluit City Hall March 30 shouting “shame to the city” and presenting a unified front ahead of the next round of collective bargaining, which begins in a few days. “I don’t think a strike is inevitable ever,” Fennell told Nunatsiaq News, on the state of negotiations. “I think it’s more likely this employer will lock out their employees as they did in 2001. But we’re remaining positive in trying to get a deal. At the same time we’re preparing our members.” See story on Nunatsiaqonline.ca. (PHOTO BY STEVE DUCHARME)