Nunavut hamlet getting back on top of sewage service

All four trucks should be operating again next week: GN 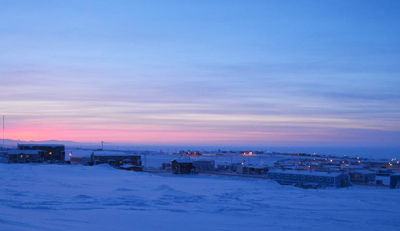 Residents of Pond Inlet are all back on trucked sewage service, said the GN Feb. 19. (PHOTO BY NORMAN KOONOO/FACEBOOK)

Residents of Pond Inlet are all back onto trucked sewage service, said the Government of Nunavut’s department of Community and Government Services Feb. 19.

GN officials were in the Baffin community Feb. 18, a week after the hamlet declared a state of emergency because three sewage trucks were broken down.

That left sewage overflow and some residents with no running water.

“At one point, there were 54 units dealing with issues of overflow,” said Darren Flynn, assistant deputy minister for CGS. “But now, everyone has service again.”

A second sewage truck has recently been repaired so the hamlet is now operating two vehicles — one 2,500 gallon truck and another 1,000 gallon vehicle — on a 16-hour work day, Flynn said.

A GN mechanic will return to the community over the weekend to repair the hamlet’s third and fourth sewage trucks, which are waiting on a new transmission and other parts. Flynn said both should be running by the end of next week.

Until then, Pond Inlet remains under a state of emergency. That status allows the hamlet certain powers such as restricting access to certain buildings, although no such measures have been taken since it was declared.

“We don’t normally see one called for something like this,” Flynn said,” but in this case, the community felt like it needed help.”

One of the major concerns in the community of about 1,500 people was the amount of sewage overflow outside residents’ tanks and also in the sewage pump-out area.

But with temperatures well below -40 C this month, much of that sewage will remain frozen until the spring.

“It’s contained for now,” Flynn said. “We’ll have a clean-up plan in place once the weather conditions permit.”

In the longer term, the hamlet hopes to hire its own mechanic this spring and acquire two new sewage trucks, which are expected to be delivered by sealift next summer.