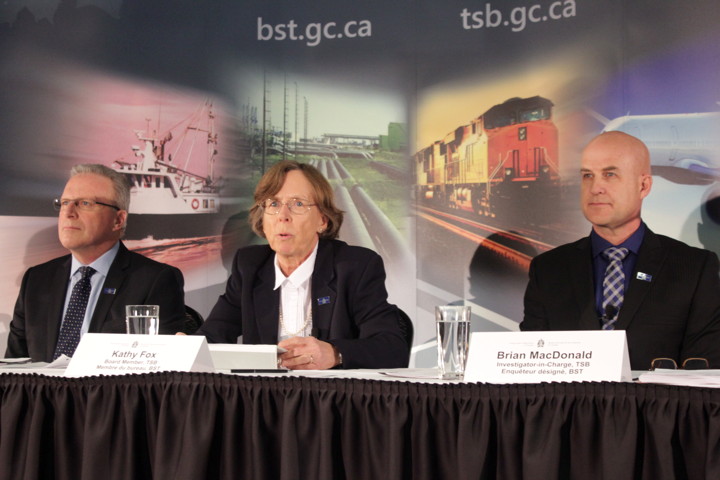 The Transportation Safety Board is recommending Transport Canada force airlines to better monitor and enforce more stabilized runway approaches and that the federal department upgrade and improve standards which guide how pilots and co-pilots deal with threat and error management in the cockpit. Those recommendations arise out of an investigation report into the August 2011 fatal crash of First Air flight 6560 which was released March 25. From left: board members Joe Hincke, Kathy Fox and lead investigator Brian MacDonald. (PHOTO BY LISA GREGOIRE) 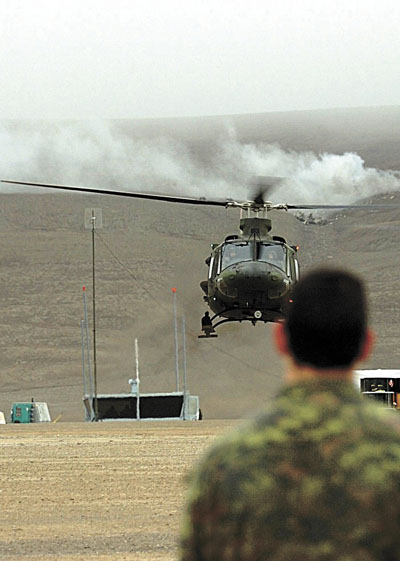 A Canadian Forces rescue helicopter lands at the Resolute Bay airport on Aug. 20, 2011. The Transportation Safety Board said the Operation Nanook exercise in Resolute that week was not a factor in the crash of flight 6560, whose smoldering remains are visible in the background of this photo. (FILE PHOTO)

OTTAWA — An accidental, and sadly undetected, change in the aircraft’s autopilot mode — possibly done by the pilot’s arm brushing the control wheel — plus a faulty compass reading and crew miscommunication led to the crash of First Air flight 6560 on Aug. 20, 2011, the Transportation Safety Board has found.

The TSB released their final investigation report into the crash March 25 in Ottawa.

It explains how pilot error and inadequate procedures on how crew members process threats and challenges during flight contributed to the fatal accident.

That process of managing threats, called crew resource management or CRM, must be updated and standardized throughout Canada, the TSB said. That’s the job of Transport Canada.

When pilot Blair Rutherford of First Air Flight 6560 finally realized while flying through a cloud of dense fog that the aircraft was not going to make a safe landing on the runway, he called for “go-around thrust,” which means to abort the landing and try again, the TSB said.

A half-second later, the plane smashed into a hillside about a mile east of the runway, killing all four crew members and eight passengers, and injuring three others.

The chartered aircraft was on route from Yellowknife to Resolute Bay, which was fully occupied by Department of National Defence personnel who, coincidentally, were preparing to conduct a simulated emergency exercise involving two aircraft at two crash sites.

The TSB said DND’s presence did not contribute to the accident.

A complicated series of events, all of which occurred within three minutes and one second, led to that Saturday morning crash. (See video animation embedded below.)

It all begins at 11:38 a.m., according to a TSB chronology of events, when the aircraft banks left to square off toward the centre of the runway.

A half-minute later, a control wheel movement occurs, changing the autopilot mode from honing into the centre of the runway to a mode that maintains the craft’s current course.

Flight 6560 has a bearing east of the runway and wind is pushing it further east.

At 11:39 a.m., first officer David Hare makes his first comment that the bearing is incorrect and then at 11:40 a.m., he makes an “informal go-around suggestion.”

This is at the heart of one of the TSB’s recommendations about CRM — standardizing a script of commands to make instructions clear in a crisis.

“In the absence of standard phraseology applicable to this current situation, [Hare] had to improvise the go-around suggestion,” the TSB summary states.

Because cockpit voice recorder conversations are legally protected, the actual wording of Hare’s suggestion cannot be made public.

At this point, Rutherford and Hare are each trying to figure out why some indicators are telling them they have time to land safely and others are not.

The compass, for instance, reads 17 degrees off the proper bearing, but the GPS and other systems show a different, and correct, bearing. It’s likely the pilot noted the compass bearing and thought they were on track to reach the runway, the TSB report says.

At three miles out — the distance at which an aircraft should be fully configured to land — Hare alerts Rutherford that they are “not configged.”

They continue to process information, prepare for landing and assess the risks of the situation.

At 11:41 a.m., the ground proximity warning system alerts the crew that they have reached the “sink rate,” which is 1,000 feet above ground.

Three seconds later, Hare says “go-around,” and the pilot does so.

But there is no time. The plane crashes, breaks apart and catches fire.

Three survivors — Nicole Williamson, Robin Wyllie and Gabrielle Aleeasuk Pelky, who was seven at the time — are thrown from the aircraft and tumble among the twisted rubble.

“Although the company had a policy that required an immediate go-around in the event that an approach was unstable below 1,000 feet above field elevation, no go-around was initiated,” the summary states.

“The first officer was task-saturated, and thus had less time and cognitive capacity to develop and execute a communication strategy that would result in the captain changing his course of action.”

Rutherford was similarly “task-saturated,” the report says, and “likely did not have a high-level overview of the situation. This lack of overview compromised his ability to identify and manage risk.”

Task saturation is an issue that First Air says it dealt with right away after their own investigation into the events nearly three years ago.

Chris Ferris, First Air’s executive vice-president told Nunatsiaq News that CRM training, which used to involve a half-day at flight school, has now been increased to a full day.

The company also requires all pilots to undergo three days of flight simulator training every six months to refresh their “threat and error management” capacity in the event of emergency situations such as this.

Part of improved training involves standardizing language, roles and operating procedures for both captains and first officers and reinforcing those procedures during training.

“Given the complicated nature of the environment in the cockpit, you don’t want unclear wording,” Ferris said.

Procedural changes also involved paring down the workload during take-off and landing to ensure those flying the plane are not so over-tasked that they don’t notice something is amiss — such as the change in autopilot mode that went undetected.

“You can’t be so focused that you miss something like that,” Ferris said.

Those changes, Ferris stressed, occurred soon after the crash, once the airline uncovered the series of events that lead to the crash — and long before the TSB released it’s report.

“On a day like today, we are thinking of the families involved and our crew members,” Ferris said, when asked if he had anything to add. “We definitely took lessons from this accident.

“Our thoughts are with them, and the people of Resolute Bay. We thank them for their help and support.”

Although Transport Canada is currently working on an updated and improved set of CRM training standards for the aviation industry, “the Board is concerned that a comprehensive integrated approach to monitoring and reinforcing best practices is still needed,” said TSB board member Kathy Fox.