Rabies shows up in dogs and foxes in Nunavik

Rabid dogs have been destroyed in Kuujjuaq and Kuujjuaraapik 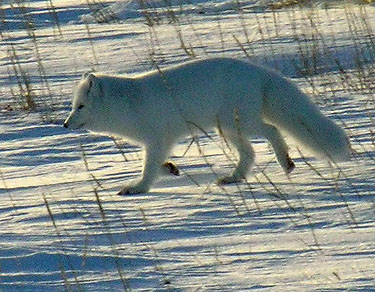 Foxes — and dogs — have been found to carry rabies in Nunavik, prompting the Nunavik public health department to issue a warning to the region. (FILE PHOTO)

If a dog bites you in Nunavik, you may run the risk of developing rabies.

That’s because rabies appears to be spreading around the region in 2012.

Nunavik public health officials say a total of three cases of rabies in dogs were confirmed recently in Kuujjuaq and Kuujjuaraapik.

“The infected animals have been destroyed and the required preventive measures have been taken,” the public health department said in a March 6 news release.

But many dogs in Nunavik lack the most basic protection against becoming infected with rabies — a vaccination.

While Quebec sends veterinarians to vaccinate animals on an annual basis, there is no regular vet care available in Nunavik.

And veterinarians don’t generally reach every community each year.

Because rabies is always present among the fox populations in Nunavik, it’s rare for a year to go by without confirmed cases of animal rabies in the region, the health officials’ news release said.

But now there are more rabies cases among foxes, as well as among dogs.

Foxes and wolves are the main carriers of rabies in the wild—and when they bite dogs, rabies can spread quickly.

Six foxes have tested positive for rabies over the past four months in Nunavik.

So health officials are now warning people to be careful in the presence of unknown animals — whether they’re wild, like foxes, or domestic, like dogs.

And the Canadian Food Inspection Agency, Quebec’s department of natural resources and wildlife and its agriculture, fisheries and food department is helping to tackle the outbreak.

About one or two people a year in Nunavik receive the rabies vaccine, according to information furnished to Nunatsiaq News in 2009. A Kuujjuaq man recently received treatment for rabies after coming into contact with a dog thought to be infected with the virus.

“There is no treatment for rabies. The only effective procedure is the administration of the required vaccines after human exposure to the rabies virus,” said Dr. Serge Déry, Nunavik’s director of public health.

The rabies virus, present in the saliva of an infected animal, spreads to people who are bitten or scratched by an infected dog or fox.

The virus then travels along nerve cells to the brain.

Symptoms of rabies in animals usually develop between 20 and 60 days after exposure.

The symptoms can include either aggressive and combative behaviour or listless and weak behaviour.

But, in both kinds of rabies, the “furious” or “dumb” form, death occurs a few days after symptoms appear, usually from respiratory failure.

Rabies in people, which progresses in the same way, is also fatal.

To avoid becoming infected with rabies:

• keep foxes away from houses and areas where domestic animals are kept, for example, by blocking access to buildings and garbage containers;

• have your pet dogs and cats vaccinated against rabies;

• don’t touch the body of a dead or sick animal with your bare hands;

• if you touch the body of a dead or sick animal with yout bare hands, wash your hands with soap and water immediately afterwards;

• keep your dogs in a safe place, tied up or on a leash, and do not allow them to wander;

• if your pet is bitten by another animal, handle it with gloves, tie it up or isolate it until you receive instructions from the CFIA veterinarian;

Notify the municipality about strays, and keep an eye on young children playing with dogs.

And, if you’re bitten, wash the wound with soap and water for 15 minutes and immediately contact your local health clinic.

You can receive a vaccine for preventing rabies in case of a bite or exposure to the saliva from an infected animal.

But you must receive the vaccine rapidly after contact, with four shots given over 28 days.

You can learn more about rabies and the rabies virus, the symptoms and the precautions to take here.