“I’ve never seen such a warm, crazy winter in the Arctic” 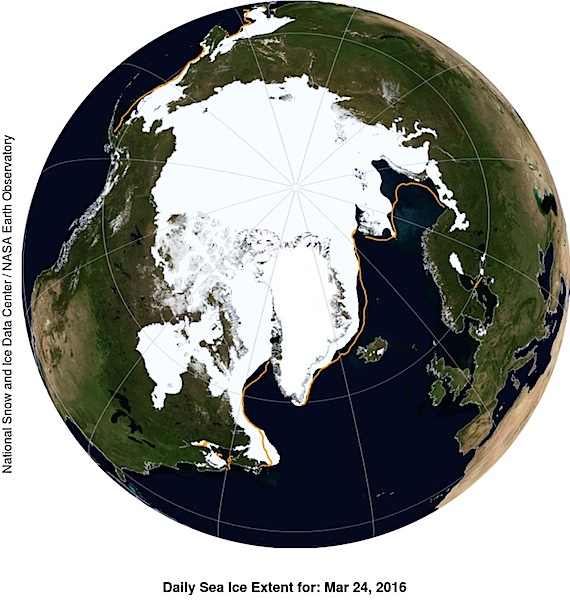 Arctic sea ice has set a record in 2016 for a low maximum extent — for the second year in a row.

That’s according to scientists at the United States’ National Snow and Ice Data Center and NASA, who base their observations on detailed satellite images.

Air temperatures over the Arctic Ocean during December, January and February were two to six degrees Celsius above average in nearly every region, the NSIDC said.

The small size and poor state of the Arctic winter ice extent comes with growing concern about the impact of climate change on the Arctic — and the entire planet.

New research by outspoken climate activist and scientist James Hansen predicts that the continued climate-warming emissions during this century will produce dramatic upheavals in ocean currents and temperatures.

“There is a possibility, a real danger, that we will hand young people and future generations a climate system that is practically out of their control,” he said.

In this short animation from NASA, you can watch the Arctic sea ice freeze cycle from the last summertime minimum to March 24, when the ice reached its winter-time maximum extent.

But there was also some good news in the March 28 release: The peak of Arctic ice occurred later in 2016 than the average in the 37-year satellite record.

That means there will be a shorter-than-average ice melt season for the coming spring and summer — and possibly less loss of sea ice next year.

During this past winter, sea ice extent was below average throughout the Arctic, except in the Labrador Sea, Baffin Bay, and Hudson Bay.

Overall, Arctic ice extent growth during the winter of 2016 was “sluggish,” the NSIDC-NASA release said.

“Other than a brief spurt in late February, extent growth has been slow for the past six weeks,” said Walt Meier, a research scientist at the NASA Goddard Space Flight Center in the March 28 release.

That’s because, in addition to a warmer atmosphere, the Arctic Ocean has also warmed up.

“That warmer ocean will not let the ice edge expand as far south as it used to,” Meier said.

The “significant downward trend” in Arctic sea ice is “ultimately related to the warming atmosphere and oceans,” he said.

In less than a month, on April 22, governments will meet at the United Nations in New York, where the Paris climate deal, signed last December, will open for signature.

The date, April 22, coincides with the global observance of Earth Day.