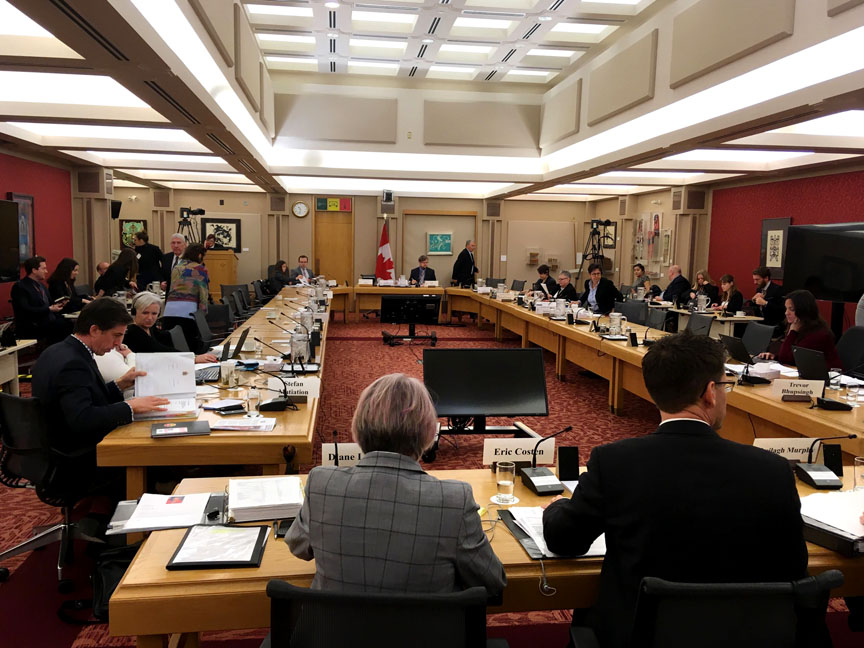 The Senate standing committee on aboriginal peoples heard from federal bureaucrats yesterday on how they plan to implement Bill C-45, which will legalize recreational cannabis in Canada. (PHOTO BY STEVE DUCHARME)

OTTAWA—Federal officials defended cannabis legalization legislation when they appeared before the Senate’s standing committee on aboriginal peoples in Ottawa yesterday, but they didn’t escape criticism from several senators questioning Canada’s preparedness ahead of the passage of Bill C-45.

The Senate of Canada is currently debating the Cannabis Act, which legalizes recreational use of cannabis, following its recent passage through the House of Commons.

But leading senators state they will delay voting on the bill’s third and final reading amid concerns about implementation of the law.

The ongoing examination of Bill C-45 by the Senate has waylaid the Liberal government’s promise to bring the new law into effect by July 1.

Legalizing cannabis “will add another level of crisis into our lives,” McCallum said in a statement, and that “most everything is in a developmental stage and we are working for July 1.”

“People just seem to be marching towards passing the bill, and a lot of First Nations have said we need more time and nobody seems to be listening to them.”

Nunavut Senator Dennis Patterson, serving as chair during Tuesday’s meeting, said constituents speaking at his recent public consultation tour across the territory are “utterly appalled” at proposed fines in lieu of criminal charges for minors, aged 12 to 17, caught with five grams or less of cannabis in Bill C-45.

“Even people who support legalization in remote Nunavut communities believe that young minds are developing and vulnerable and cannot understand how a signal like that could be sent by our federal government,” Patterson said.

Eric Costen, the acting assistant deputy minister for Health Canada’s cannabis legalization and regulation branch, responded that it was “important to recognize that there are imposed provisions in the [C-45]… that look to punish the adult that’s involved in the transaction of providing the cannabis to the young person.”

“The hope was not to criminalize young people for possessing very small amounts of cannabis,” she said, and that provinces and territories can still seize drugs and fine youth caught with cannabis.

Labelle argued that programming is needed for youth to promote safe and responsible use, but the government “doesn’t want to give a life-long punishment” that could introduce young offenders too early into the corrections system.

Ontario Senator Kim Pate, citing disproportionate levels of criminalization of Indigenous people across Canada, asked how the government would respond to drug convictions nullified by the new legislation.

“I think there probably needs to be some real debate around how we address that particular issue,” responded Trevor Bhupsingh, the director general for the law enforcement and border strategies directorate for Public Safety Canada.

Bhupsingh couldn’t give any specifics to the standing committee on expunging prior cannabis convictions, but said the “government wants to ensure the review of the pardon system does take place.”

“With respect to pardons, that’s an active discussion that’s going on and I think that there will be some direction soon.”

Valerie Gideon, the acting senior assistant deputy minister for the First Nations and Inuit health branch of Indigenous Services Canada, said tripartite discussions between Ottawa, the Government of Nunavut and Nunavut Tunngavik Inc. on a future addictions treatment centre in the territory are ongoing.

“We have been working very diligently with the three partners to come up with a model,” Gideon said

She cited a completed feasibility study and a commitment from NTI to contribute resources to a culturally appropriate treatment centre in Nunavut.

That budget allocated over $27.5 million over five years to eliminate tuberculosis across Inuit Nunagaat, as well as $400 million over 10 years for housing programs in Nunavik, Nunatsiavut and the Inuvialuit region.

The budget also promised a national Inuit health survey and skills and training programs for Inuit workers, but did not specifically mention any addictions treatment or infrastructure financing.