“What rocks do you bring home? How are you going to decide that?” 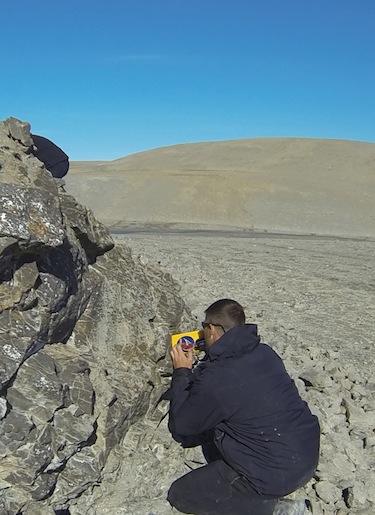 Jeremy Hansen checks out some rocks on Devon Island during his trip to Nunavut in July. His goal: to hone his geological skills so that one day he can go to the moon or even Mars. (PHOTO COURTESY OF FLICKR/ CANADIAN SPACE AGENCY)

To the average Joe, rocks aren’t the most interesting things on Earth.

But Canadian Space Agency astronaut Jeremy Hansen has a new found interest in them — that’s because it’s his hope to leave Earth one day.

“I didn’t have too much respect for rocks,” Hansen told Nunatsiaq News in a call from NASA’s Lyndon B. Johnson Space Centre in Houston, Texas.

“I grew up picking rocks out of a farmers field on our farm every summer. I spent weeks collecting rocks so they wouldn’t damage the equipment,” Hansen said.

“Now I’ve been studying geology and learning more about it and I really enjoy the mystery of trying to figure out what happened on this planet millions and even billions of years ago.”

Hansen’s new geological training is par for the course in getting in line to become one of the next astronauts to leave lower-Earth orbit and land on the moon, an asteroid, or even Mars one day.

That’s why Hansen travelled to Nunavut this past July — for the second time in two years — to study geology with University of Western Ontario professor and geologist Gordon Osinski at the Haughton impact crater on Devon Island.

Hansen is learning about geology so he can recognize and prioritize what rocks to bring back to Earth on a mission to the moon or Mars.

And there’s no better place to study this than the 23-kilometre-wide Haughton crater — formed millions of years ago when a meteorite smashed into the Earth.

Osinski describes impact craters like Haughton as “natural drills” that bring different rock types up to the surface of the Earth, and even valuable minerals.

Breccia — a rock type made up of different fragments of rock not dissimilar to concrete — is most common, and Hansen had to figure out what rocks are most important tot bring home.

There are about 30 known impact craters like Haughton in Canada, which Osinski says is unique in the world. Last year Osinski and Hansen went to Victoria Island. to study the newly discovered impact crater there.

Hansen’s also learned how to navigate around craters in an unknown environment while in Nunavut, much like what he would expect on the moon or Mars.

“I’m learning how to explore. I’m going to a really remote place in the Arctic of Canada where we’re on our own, we don’t have necessarily immediate rescue, we have to work as a team we have to confront any situation that we run into,” Hansen said.

Hansen has to be a jack of all trades in space — he’s already a trained fighter pilot, and graduated from NASA’s candidate training in 2011.

Now, Osinski thinks Hansen’s on his way to becoming a geologist, and he said it will be the first time since the Apollo moon missions that astronauts will be taught geology.

“What we’re trying to do is give Jeremy the tools to be able to make decisions on the fly,” Osinski said. “Even for geologists — what rocks do you bring home? How are you going to decide that?”

So Osinski, also the director of the Canadian Lunar Research Network and associate director at the Centre for Planetary Science and Exploration, gave Hansen a test

Laid in front of Hansen were 20 rocks, and Osinski said “you can only bring back half.”

“He did really great actually. He has a good eye for rocks — the subtle differences, the colours that you can use to identify different rock types,” Osinski said.

And Osinski thinks this training will give Hansen an edge over some American or Japanese astronauts when the time comes to go to the moon or Mars.

Next year will be another Canadian astronaut, David Saint-Jacques’s turn to go to Nunavut and join Osinski.

“If we can prepare the Canadian astronauts to be the best prepared then hopefully when it comes to NASA looking at all the astronauts, hopefully one of our Canadians will float to the top,” Osinski said.

Hansen, 37, knows that he probably has only a little over a decade to have the opportunity to go to the moon.

“[The] life span as an astronaut is limited to a 20 year window. In my early 50s, I’d be kind of approaching my last mission,” Hansen said.

Hansen said right now it doesn’t “make sense economically” to go to the moon, but “if history’s a teacher for us, then we know that’s going to change.”

And that spells for more trips to Nunavut to study craters in the future.

Hansen sites advancements in technology and the commercial space industry as proof that man can walk on the moon sometime in the next decade.

A video about Hansen’s take on the trip to Devon Island can be seen here.