Spinning wool, and a sustainable economy, in western Nunavut 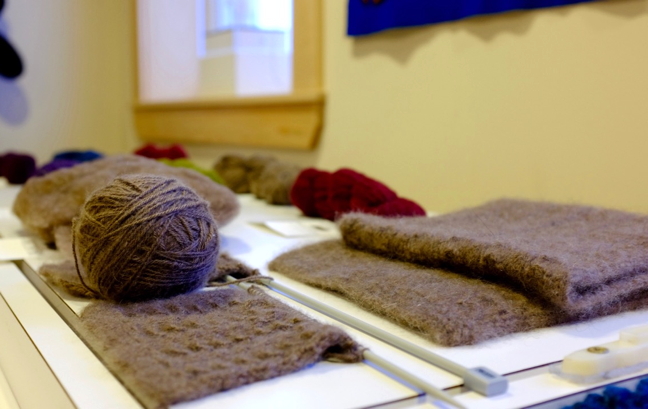 The wool spun from muskox qiviut is strong, soft and waterproof. (PHOTO COURTESY THE QIVIUT PROJECT) 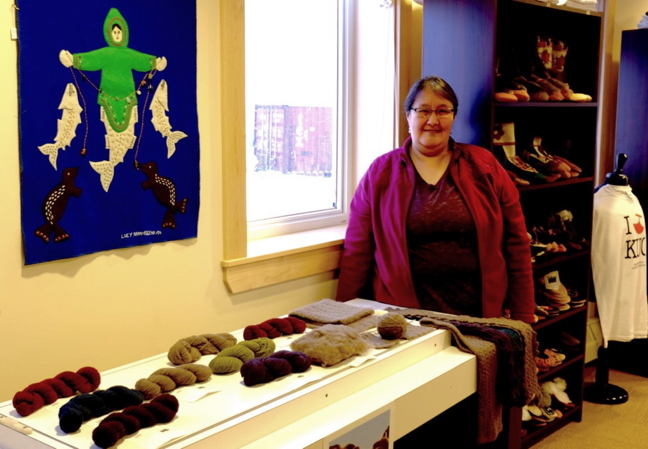 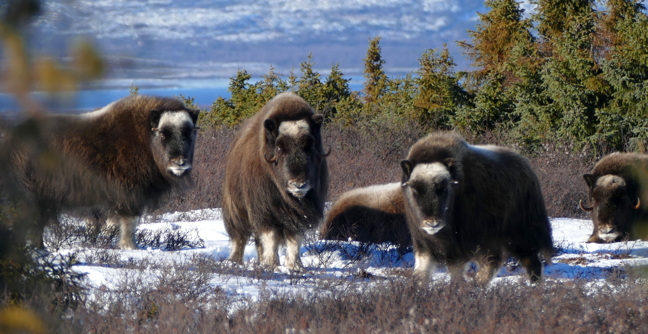 Although these muskoxen were spotted in northern Quebec, they are the same creatures whose furry hides make luxurious wool. (PHOTO BY ALLEN GORDON)

Could 2017 be the year of Nunavut qiviut?

A start-up business out of western Nunavut that uses local, sustainable material, provides jobs, improves food security and strengthens traditional Inuit cultural practices all in one, hopes so.

That start-up, based in the western Nunavut community of Kugluktuk, involves the production of high-end qiviut wool from the hides of muskox, or umingmak in Inuktitut.

And Nunavut Qiviut, as the business is called, has Inuit hunters, artists and economic developers all abuzz.

Kugluktuk hunter Sheldon Klengenberg said that, before Nunavut Qiviut began, he and other hunters often left muskox hides out on the land, because they were heavy and many Inuit don’t have a use for the hides nowadays.

“But with this project, we bring them back and get around $150 per hide and that goes towards gas or bullets or whatever we need to go harvesting,” Klengenberg said over the phone recently from his western Nunavut home.

Hunters in Kugluktuk have shown a lot of interest in the business, which also provides seasonal part-time jobs in the community, the hunter said.

“That helps people who are struggling for groceries or just can’t make end’s meet.”

And now that hunters can make extra money for harvesting muskox, they can go out hunting more often.

“When I harvest muskox, I’m going to give away 90 per cent of it because that’s how it’s supposed to be when people are hungry and can’t go out harvesting themselves. So this harvesting helps me go out and get some more,” Klengenberg said.

Geoffrey Clark began Nunavut Qiviut, unofficially, a couple years ago when, as an experiment, he and his wife wanted to find out every step in the commercial production chain of qiviut wool.

“There’s always been a challenge of how to recognize harvesters in our community. So we were really interested in the food security part, and how to support traditional lifestyles,” said Clark, who works for the Kitikmeot Inuit Association in Kugluktuk where he’s lived for 14 years.

From hide to usable luxury fibre, Clark told Nunatsiaq News he discovered a complex chain that saw muskox fur sent from Nunavut to Canada and the United States.

In setting up that production chain, Clark said he kept as many steps within Nunavut as possible.

Logistically, it didn’t make economic sense to have the spinning done in Nunavut, but every step up to that point could stay within the territory.

“We haven’t broken even yet, but if we can just break even, we can continue the good things this project has to offer the community,” Clark said.

Those outside of the community see big potential benefits of the project too.

Helen Iguptak, a Kivalliq-area elder and artist who spins her own wool, said qiviut is “the best wool in the whole world.”

Traditionally, muskox hides were used as the bottom-most layer of bed matting and hunters would tuck little pieces of qiviut into their mittens for of its warmth, she said.

In fact qiviut’s warmth is almost legendary: Iguptak said her friend’s husband broke through ice once and when he emerged, his feet, protected by qiviut socks, weren’t even wet.

“I’d apply for this project if it was here in the Keewatin [Kivalliq]. I love spinning qiviut. If I start spinning I don’t stop until all my qiviut is gone, because it’s addictive,” Iguptak laughed.

And qiviut spinning is gaining in popularity, in part thanks to the Nunavut Arts and Crafts Association which has held a number of workshops, Rankin Inlet artist Leslie Fredlund told Nunatsiaq News recently.

“It’s such a soft, luxurious fibre, and it’s so unique and special,” said Fredlund, who lead NACA’s qiviut-spinning workshop at the Kivalliq Trade Show in September.

Because the wool is so expensive, Fredlund said she began spinning qiviut herself.

“As a territory, we need to tap into the qiviut market. It could be huge.”

A project like this, based on a natural, renewable and traditional Inuit resource, is long overdue, said Theresie Tungilik, an arts and traditional economy specialist with the Government of Nunavut.

“What we really need now is to start promoting qiviut—it’s so soft and warm, I’ve never found any other kind of wool like it—so that the word is out there. It could be very profitable,” Tungilik told Nunatsiaq News from Rankin Inlet.

And that traditional economy is still important today: For example, local hunters provide a valuable service by harvesting country food, which is healthier than store-bought or domesticated meat, said Tungilik.

“Our traditional economy has to be strong if we want healthy communities, and we have to blend it with the modern economy where money talks,” she said.

International bans on sealskin products, like the one lifted by the European Union this year, broke the Inuit traditional belief that every part of an animal is sacred and should be used after harvesting, Tungilik said.

But that is slowly changing as sealskin fashion grows in popularity and adapts to modern living.

And products made of qiviut wool could see a similar boom, said Tungilik.

“People shouldn’t shun us for becoming once again resilient with what we have,” she said. “We have to adapt by blending the modern with the traditional, and the world must agree with us that this is good.”

Nunavut Qiviut wool is already available in Iqaluit at Malikkaat, in Rankin Inlet at Ivalu, at the Kugluktuk visitors centre and in Yellowknife.