Spray seawater into the air and cool the Arctic: scientists 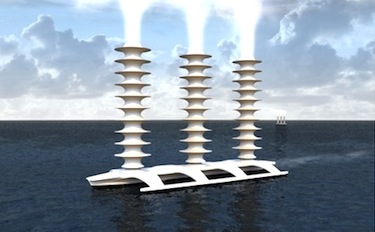 An artist’s impression of the spray vessel, whose underwater turbines generate the energy for spraying. Now, the plan would be to have similar turbines operating on land-based facilities at either side of the Arctic. (IMAGE BY JOHN MACNIELL)

Cool the Arctic through spray-producing facilities: that’s the concept MPs in the United Kingdom heard about this past week.

Among the promoters, wave energy pioneer and Edinburgh University scientist Stephen Salter who’s been in favour of geo-engineering to curb clmate change for years.

Salter and other scientists who spoke to the MPs in London said the world faces a “planetary emergency” due to the release of methane, a powerful climate-warming gas, now being released underwater.

He’d like to see them built in the North-Atlantic Faroe Islands and in the Bering Strait islands between Russia and Alaska.

But the new cloud droplets have an lifetime of about one day and so these must be continuously supplied, he says.

Salter has previously suggested ships which would produce spray from remotely-controlled ships, drawing their energy from the wind.

“We would need to build about 50 new spray vessels a year, each spraying 30 kilograms a second and costing a few million dollars apiece to keep world temperatures steady despite present levels of carbon dioxide release,” he said in a handout on that plan.

But at the recent meeting with MPs, organised by the “Arctic Methane Emergency Group,” Salter said the situation in the Arctic is so dire that the sea-spraying ships might take too long to get into operation.

“I don’t think there’s time to do ships for the Arctic now,” he told MPs, according to reports on the meeting. “We’d need a bit of land, in clean air and the right distance north… where you can cool water flowing into the Arctic.”

The AMEG says there’s “an extremely high international security risk from abrupt and runaway global warming being triggered by the end-summer collapse of Arctic sea ice and release of huge quantities of methane gas from the seabed.”

“Such global warming would lead at first to worldwide crop failures but ultimately and inexorably to the collapse of civilization as we know it,” its emergency “declaration” posted on its website says. “This colossal threat demands an immediate emergency scale response to cool the Arctic and save the sea ice. The latest available data indicates that a sea ice collapse is more than likely by 2015 and even possible this summer (2012).”

The group says measures to counter the threat have to be ready within a few months.

“Governments must adopt a plan of action to cool the Arctic, halt the retreat of the Arctic sea ice and slow the release of methane. A variety of means of cooling the Arctic are available, some of which may be classed as geoengineering. “

Other ideas for heat absorption which have been tossed around by scientists include adding iron to the oceans so more plankton can grow and eat the main greenhouse gas, carbon dioxide; reflecting heat by using huge, aerial sunshades, as white-painted reflectors, on the land to bounce sunlight back into the atmosphere; or even using a “space hose” to create more clouds in the northern latitudes.

Some climate scientists have said they are concerned about the possible side effects of fiddling with the planet’s clouds, land and oceans.

That’s because reflecting heat would only camouflage rising temperatures, which would later return in force, they say.