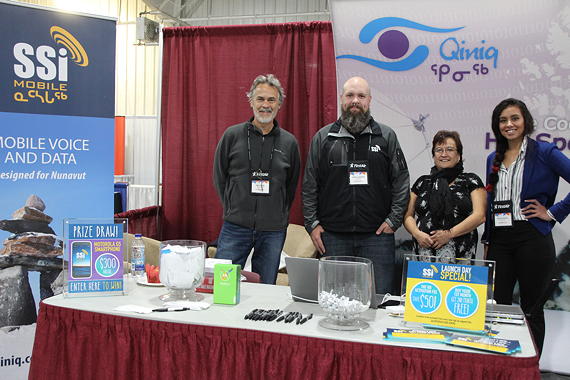 That’s because the Yellowknife-based SSi Mobile is taking direct aim at telecom giant Bell Canada and its two wholly owned subsidiaries that operate in the North, Bell Mobility and Northwestel.

“We have always been committed to providing the best possible service for our customers, and in that respect, we continue to fight hard for consumers and for fair competition in the North,” Jeff Philipp, SSi’s founder and CEO, said in a news release on Thursday, Nov. 15, that announces the new plans and prices.

For the time being, that makes it the only telecom able to cover all 25 Nunavut communities with cellular service.

For 16 of those communities, SSi Mobile is the first provider to offer either 4G or 2G wireless.

So to firm up that position, they’re offering a new plan that offers five gigabytes, or GB, of data for only $110 per month, SSi said in its release.

Customers who need to send or receive more than that may buy extra data for $2.50 per 100 megabytes, or MB.

SSi says that compares favourably with other providers that charge data overage rates of up to $10 per 100 MB.

And all SSi customers can benefit from what SSi calls Nunavut’s best price on Canada-wide calling.

As of this past Nov. 15, all SSi Mobile customers who use minutes beyond what’s included in a calling plan will pay only six cents per minute for Canada-wide calling, the company says.

As for calls between Nunavut communities, SSi already treats those calls as “local” and does not charge extra for them.

Although they don’t refer to Bell Mobility by name, SSi says their “principal competitor in the North” charges 50 cents a minute for long-distance calls, whether those calls are made between Nunavut communities or across Canada.

“From day one, our mobile rates have been very competitive compared to any provider in Canada—not just in the North. And judging by the number of new customers moving to SSi Mobile, it is clear the residents of Nunavut agree,” he said.

SSi also offers a basic plan for only $25 per month, as well as a pay-as-you-go approach to data and minutes.

By the end of 2019, however, SSi will face new competition of its own in those Nunavut communities where it is now the sole provider.

Northwestel has promised to roll out 4G LTE wireless mobile service for Bell Mobility in all 25 Nunavut communities by the end of that year, as well as higher-speed internet ranging up to 15 Mbps.

Premier Joe Savikataaq, two other cabinet ministers and drum dancers supplied through Alianait helped Northwestel market that new offering at a ceremony in Iqaluit this past September held to cut a ribbon for a new satellite dish in downtown Iqaluit.

Northwestel, which is 100 per cent owned by Bell Canada, received a $49.9-million contribution from the federal government to help pay for the new satellite earth stations and network hubs required to run their system, which uses Telesat’s new Telstar 19 satellite.

For its part, SSi has invested $75 million over the past three years to upgrade its Nunavut-wide Qiniq network to get ready for its new SSi Mobile system.