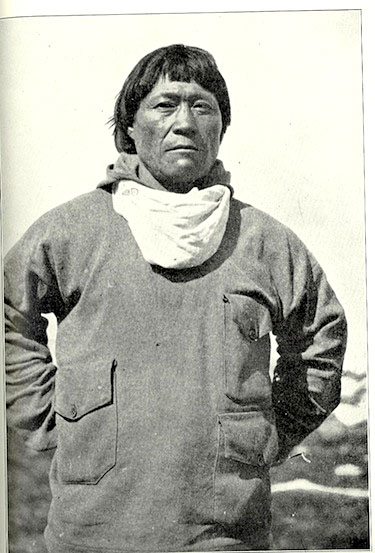 In 1922 the ethnologist and explorer, Knud Rasmussen, travelled in the interior of the Kivalliq Region and visited the Paallirmiut Inuit who lived on Lake Hikoligjuaq.

There he met a man, Igjugaarjuk, whom he described as an unusual man who enjoyed great esteem among his countrymen.

Rasmussen had been told by other Inuit that Igjugaarjuk would be the ideal person to assist the traveller in understanding the customs of the Paallirmiut. Rasmussen wrote that the man was “wise, independent, intelligent and exercised great authority over his fellow-villagers.”

Igjugaarjuk was a shaman and told his visitor about the spirits which governed the lives of the Inuit of the inland, those whom scientists called the “Caribou Eskimos.” On the coast the Inuit feared Nuliajuq, the spirit called Sedna in some other parts of the north, who governed access to the animals of the sea.

But inland Inuit, who depended almost entirely on the caribou for their survival, knew nothing of a spirit by that name, fearing instead one called Pinga – the one up in the sky – who was the guardian of all life, both animal and human. They also feared Hila, the spirit of the air.

Knud Rasmussen was interested in how a man became a shaman and asked Igjugaarjuk to describe the training he had undergone. Igjugaarjuk told him that one could only become a shaman through sufferings that are almost enough to kill.

Here is his story:

“When I was to be a shaman, I chose suffering through the two things that are most dangerous to us humans, suffering through hunger and suffering through cold. First I hungered five days and was then allowed to drink a mouthful of warm water. The old ones say that only if the water is warm will Pinga and Hila notice the novice and help him. Thereafter I went hungry another fifteen days, and again was given a mouthful of warm water. After that I hungered for ten days, and then could begin to eat, though it only had to be… the sort of food on which there is never any taboo, preferably fleshy meat… I was to keep to this diet for five moons, and then the next five moons might eat anything. But after that I was again forced to eat the meat diet that is prescribed for all those who must do penance in order to become clean.

“My instructor was my wife’s father, Perqannaaq. When I was to be exhibited to Pinga and Hila, he dragged me on a little sledge that was no bigger than I could just sit on. He dragged me far over on the other side of Hikoligjuaq. It was a very long day’s journey inland to a place we call Kingaarjuit – the high hills… It was in wintertime and took place at night with the new moon. One could just see the very first streak of the moon; it had just appeared in the sky. I was not fetched again until the next moon was of the same size.

“Perqannaaq built a small snow hut at the place where I was to be, this snow hut being no bigger than that I could just get under cover and sit down. I was given no sleeping skin to protect me against the cold, only a little piece of caribou skin to sit upon. There I was shut in… When I had sat there for five days, Perqannaaq came with water, tepid, wrapped in caribou skin, a watertight caribou-skin bag. Not until fifteen days afterwards did he come again and hand me the same, just giving himself time to hand it to me, and then he was gone again, for even the old shaman must not interrupt my solitude…

“My novitiate took place in the middle of the coldest winter, and I… was very cold, and it was so tiring having to sit without daring to lie down, that sometimes it was as if I died a little. Only towards the end of the 30 days did a helping spirit come to me, a lovely and beautiful helping spirit. It was a white woman. She came to me whilst I had collapsed, exhausted, and was sleeping. But still I saw her lifelike, hovering over me, and from that day I could not close my eyes or dream without seeing her. There is this remarkable thing about my helping spirit, that I have never seen her while awake, but only in dreams. She came to me from Pinga and was a sign that Pinga had now noticed me and would give me powers that would make me a shaman.”