Aim is to ensure program meets the needs of Inuit 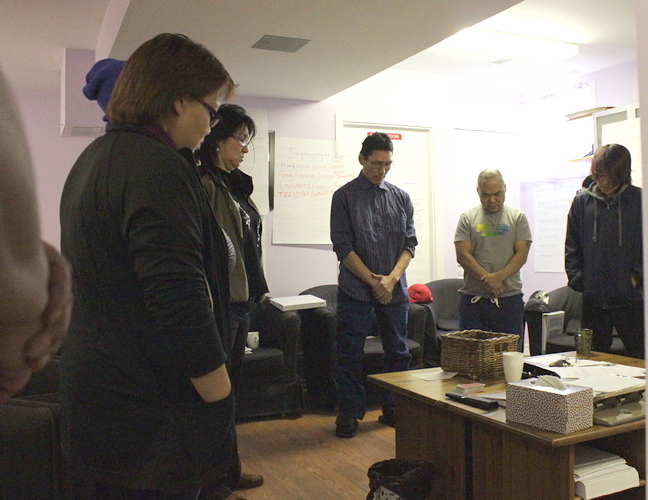 Clients at the Mamisarvik Healing Centre say a prayer before starting a session. (FILE PHOTO)

Nunavut Inuit have a chance to help set the direction of a new addictions treatment program in Ottawa.

Tungasuvvingat Inuit, the Ottawa-based Inuit community organization, is asking Nunavut Inuit to spend a few minutes online to answer a short, to-the-point set of questions in English or Inuktitut.

The program “focuses on trauma-informed recovery through cultural healing and wellness,” TI said in a release about Mamisarvik.

In early 2017, the Government of Nunavut’s Health Department said it would again help Nunavummiut head south for addictions treatment at the Mamisarvik centre.

The GN said it would provide funding for clients who had been referred to the Mamisarvik program, so they can travel to Ottawa.

No similar addictions treatment option is available in Nunavut, although information that surfaced at the Nunavut legislature last June said the GN might be considering a plan to repurpose the Piqqusilirivvik Cultural School in Clyde River into a territorial addictions treatment centre.

The Department of Health then said it had no intention of doing that.

But a $388,000 feasibility study for such a territorial treatment facility remains underway.

Mamisarvik’s residential trauma and addictions program has been based at a 12-bed facility on Russell Rd. in Ottawa.

Launched in 2003 with Aboriginal Healing Foundation money, the centre was forced to cobble together other funding sources when the AHF fund ran out in 2013.

Then, in early 2016, TI announced Mamisarvik would have to close because it had run out of funding options. But days before the planned closure, Ottawa kicked in $1.3 million to keep the centre afloat for another year.

After almost shutting down in March 2016, Mamisarvik re-opened in October 2016 with a women-only program.

Now TI says it is “seeking your input to help us develop the program model and ensure it meets the needs of the community.”