“Snowy owls are big and dramatic and charismatic, and kind of sexy” 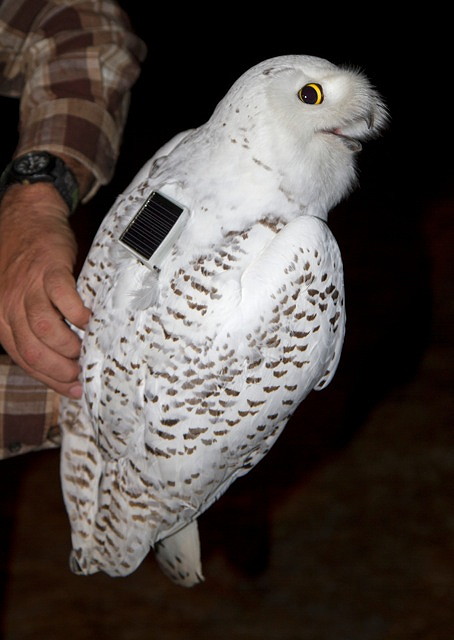 Assateague the owl with its solar-powered GPS transmitter which will transmit texted location messages to researchers via a cellular network every half hour for years. (PHOTO COURTESY SCOTT WEIDENSAUL) 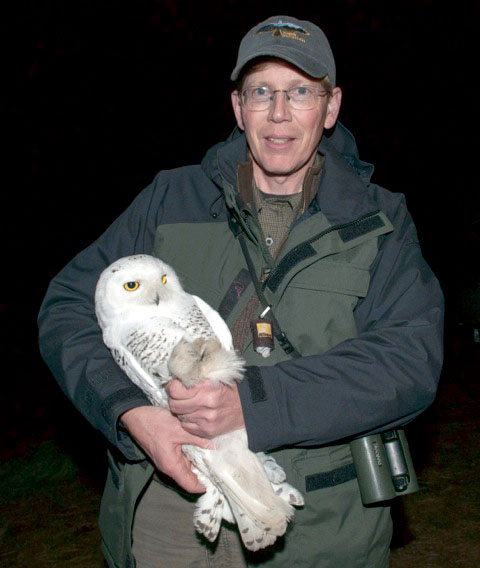 When you think of an “irruption” you might think it’s just a funny way to spell what happens when a volcano explodes.

But that’s the term ornithologists — bird researchers — are using to describe a mass exodus of snowy owls from the Arctic Circle to New York and as far south as Bermuda and Florida this winter.

No, this isn’t a plotline stolen from the movie Babe: Pig in the City.

Tens of thousands of baby snowy owls are invading the eastern United States because of an “absurd abundance” of lemmings in northern Quebec this past summer.

Breeding snowy owls there gorged on lemmings, bred more, and produced the so-called “irruption” phenomenon. Baby owls naturally migrate south every year — but not usually this many, and not this far south.

It’s got a few owl admirers flocking to research centres, and the bird is the word for enthusiasts in the USA.

“Snowy owls are big and dramatic and charismatic, and kind of sexy,” Scott Weidensaul said.

“These birds are showing up and literally sitting on peoples rooftops, there’s a buzz about snowy owls this winter.”

Weidensaul is a bird author and naturalist from Pennsylvania who put together a last-minute snowy owl project because of the unexpected invasion.

It’s called Project SNOWstorm — a publicly funded Indiegogo project that tracks snowy owls like never before. The public can contribute by submitting photos of the birds.

Researchers have attached a new tracking system, called GPS-GSM transmitters, to the owls, which will shed new light on where, when and how snowy owls migrate and breed.

They hope to tag 20 to 25 owls this winter. The trackers are solar powered and connected to cellular networks so information is texted to the researchers every half hour. They expect the device to continue transmitting for years to come.

The researchers will then produce maps of the owls and where they are on their popular website.

“It’s just grown like a snowball,” Weidensaul said from Pennsylvania.

But not everything is looking up for the majestic winged creature.

Young owls aren’t aware that airplanes and speeding cars are dangerous. And snowy owls tend to flock to Arctic-looking surroundings — in the south, the closest thing to that is an airport.

“Many of them have been killed from plane strikes. And obviously it’s dangerous for the planes — you don’t want to suck an owl into the engine of your 767,” Weidensaul said.

Weidensaul recounts one owl he tagged which was hanging around the Philadelphia airport.

“We had moved it 40 miles from the airport, and it flew right back there and three weeks later it flew into the path of a cargo jet and it was killed,” Weidensaul said.

Media outlets in major American cities have been reporting unfortunate bird strikes in the past few months.

Snowy owls were found dead at New York’s JFK and LaGuardia airports — airport officials wanted to shoot others for safety reasons, but public outcry prevented them from doing so.

Another owl was hit Jan. 30 by a bus in downtown Washington, D.C. The New York Times reported that it was treated at a zoo and will be released into the wild once it recovers.

A snowy owl even died in Bermuda, although it’s unclear how, Weidensaul said. Many die by natural causes.

“It’s normal that in any bird species in the first winter there’s usually a relatively high mortality of young birds. Some will simply just not do well, or not learn quickly enough to survive,” said Gilles Gauthier, a professor in the department of biology at Laval University.

Gauthier studies snowy owls every year at a research centre on Bylot Island near Pond Inlet and he said the boom shocked him a little.

Usually when there is an irruption, Nunavut and Nunavik snowy owls are synchronized in population levels.

But there were fewer lemmings and owls on Bylot Island this season.

“So I expected a weaker influx than what has been recorded. In that respect I’m a little bit surprised in the intensity,” Gauthier said.

Gauthier said all the birds will come back to the Arctic in March.