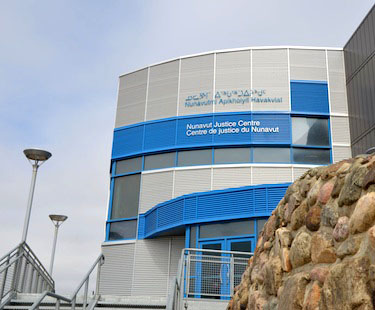 Instead of going to prison, a young Iqaluit man badly damaged by FASD will serve a sentence, imposed for two counts of robbery, at a residential treatment centre. (FILE PHOTO)

A young Iqaluit man suffering from fetal alcohol spectrum disorder, or FASD, will spend three years at a secure residential treatment centre outside Nunavut for committing two robberies in Iqaluit in Feb. 2015.

That’s from a written decision that Nunavut Justice Neil Sharkey issued Jan. 6, following a hearing held this past Nov. 10.

This sentence takes into account the 278 days that Pauloosie Ipeelee, 18, has already spent in remand, Sharkey said.

And Sharkey agreed with defence lawyer Steven Foulds that FASD is the “new face of Nunavut.”

“The defence bluntly and, I think, accurately states that Pauloosie is just one of many more like him,” Sharkey said.

FASD is the clinical term for a range of permanent mental and physical disabilities suffered by those who were exposed to alcohol inside their mothers’ wombs.

The most common symptoms of FASD include a permanently-damaged brain and nervous system, leading to mental retardation, poor impulse control and various mental health problems.

The condition occurs in Nunavut with a frequency “matched only by the lack of services in Nunavut for those affected by the disease,” Sharkey said.

While FASD is not an excuse to commit crimes, those suffering from FASD have trouble controlling impulsive behaviour and often cannot fully appreciate the consequences of their actions, Sharkey said.

He said the Ipeelee has been a “child of the street” all his life and that when he was very young, his alcoholic mother would blow marijuana smoke into his lungs.

The mother abandoned the boy when he was five, and his mother’s male partner was not a father figure.

“To the contrary, as a young boy, Pauloosie’s only thoughts about this man were to wish that the fellow was dead,” Sharkey said.

“[Crown counsel] described this phenomenon poignantly and accurately as ‘a terrifying coming of age in Iqaluit,’” Sharkey wrote.

Sentences for robbery must deter others from committing the same crime, the Crown argued.

Ipeelee committed the two robberies within a week of each other — and he pleaded guilty to both counts of robbery.

Sharkey wrote that on Feb. 10, 2015, Ipeelee sat in a getaway car outside an Iqaluit coffee shop with the mastermind of the robbery, known as “Mr. X,” while a 16-year-old accomplice held up the coffee shop with a knife.

A woman working inside the coffee shop, who was part of the plan, had sent a text message to Mr. X that told him the manager had stepped out to do errands

Mr. X, an acquaintance of Ipeelee, made off with the $1,000 that the 16-year-old took from the coffee shop.

At the time of the robbery, Ipeelee was sleeping on Mr. X’s couch and “mooching food and dope from various acquaintances,” Sharkey wrote.

A week later, on Feb. 17, 2015, Ipeelee lived “from house to house and among the same group of people involved in the earlier robbery,” the judge wrote.

“Desperate for both food and grass, Pauloosie decided to pull off a robbery on his own.”

This time, Ipeelee entered a retail store, unarmed, covered his face and told the clerk, “give me your fuckin’ money or I’ll hurt you.”

But one of the store managers recognized Ipeelee, and when police arrested him the next day, Ipeelee admitted to the two robberies.

Ipeelee clearly knew what he was doing when he concealed his face before robbing the store, Sharkey wrote.

In extensive sentencing submissions from the defence , Sharkey heard that the Government of Nunavut’s health department “dropped the ball,” when they failed to enact a follow-up care plan devised for Ipeelee upon his 2014 return from a youth treatment centre in Saskatchewan.

Medical experts testified Ipeelee’s FASD is towards the “higher-end of the scale,” and that his criminal behaviour is directly linked to his condition.

Medical experts also told Sharkey that Ipeelee’s chance of repeat offending is low, if Ipeelee’s impulses are managed “with the right therapeutic approach and with community follow-up support.”

The health department had such a plan for Ipeelee, but failed to follow through with it, Sharkey heard.

But an adult services specialist with the GN’s family services department, Susan Beddam, told Sharkey she is quite confident her division “is both equipped and willing to provide such follow-up upon Pauloosie’s discharge from the southern treatment facility.”