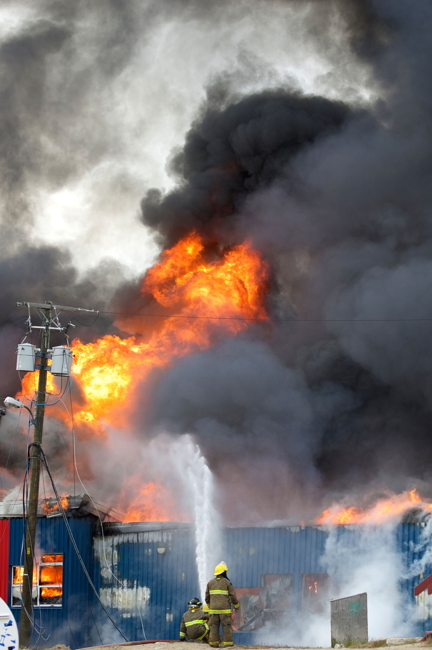 One of three youths suspected of arson in the burning of Cape Dorset’s Peter Pitseolak High School last month made a brief appearance at the Nunavut Court of Justice in Iqaluit Oct. 28.

The male suspect, whose identity is protected under the Youth Criminal Justice Act, wore a turquoise hoodie and sat in the courtroom gallery until Justice Neil Sharkey called out his name.

Police charged three youths between the ages of 13 and 16 in connection with the fire that broke out Sept. 6 — a day after the community gathered in the gymnasium for its annual high school graduation celebrations

Two of the suspects are scheduled to appear in youth court Nov. 23 in Cape Dorset.

Sharkey adjourned the youth’s case until Nov. 20 to allow the Crown more time for disclosure, reminding the youth that until then, he is still bound by his bail conditions.

On the first day of the 2015 fall session of the legislature, South Baffin MLA David Joanasie said the community is slowly recovering from the “devastating loss.”

He pointed out that there have been three school fires in Nunavut in the past 20 years: in Pangnirtung in 1997; in Cambridge Bay in 1998; and in Iqaluit in 2003.

“Parents need to continue to work together in partnership with local agencies to ensure that taking care and responsibility for our children is an ongoing priority,” Joanasie said.

During question period the same day, Joanasie asked education minister Paul Quassa what his department is doing in the short and medium term to replace Peter Pitseolak High School.

Quassa replied that the community’s high school students — about 170 in total — continue to use classrooms at the Sam Pudlat Elementary School in shifts while his department consults with the Cape Dorset District Education Authority.

Officials from the education department, as well as from the Department of Community and Government Services, will soon travel south to inspect and choose a suitable building model for a replacement school, Quassa said.

“We would like to see the construction of a new school as soon as possible,” Quassa told Joanasie, but he didn’t provide a time line for when construction would start.

Another MLA, Steve Mapsalak, asked the education minister if the Cape Dorset fire would delay plans for a new school in Mapsalak’s home community of Coral Harbour.

A start-date for construction of that school has yet to be determined, Quassa added.

The youth suspected of arson who appeared in Iqaluit Oct. 28 is scheduled to appear again at the Nunavut Court of Justice Nov. 20 at 9:30 a.m.