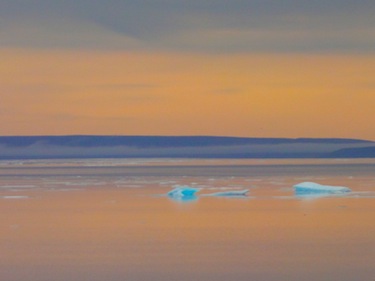 Warming of 2 C is expected to create an ice-free Arctic in the summer months, push up to one-third of all species to extinction and speed up melting of Greenland ice sheet. (PHOTO BY JANE GEORGE)

Prime Minister Stephen Harper and his international colleagues have not gone far enough to avoid “dangerous” climate change, according to an Environment Canada report that could cause problems for the Conservatives on the campaign trail.

The study, published this week in a leading science journal, suggests that global greenhouse gas emissions “must ramp down to zero immediately” to avoid a 2 C rise in the planetary temperature this century. Allowing temperatures to climb more than 2 C could wipe out thousands of species, melt Arctic ice and trigger a rise in sea level of several metres.

Given the huge reductions required, the study warns that “it is unlikely that warming can be limited to the 2 C target agreed to in the 2009 Copenhagen Accord.”

The Environment Canada scientists were not available for interviews Wednesday.

Climatologist Andrew Weaver, at the University of Victoria, said the new report highlights the “hypocrisy” of the Harper government’s approach to climate change.

The Conservatives agreed internationally to take steps to help keep warming below the 2 C threshold, but the government continues to promote expanded use and export of Canadian oil and coal that are driving up emissions.

“If we want to deal with this problem, we have to start transforming our energy systems now,” said Weaver. “Not yesterday, not tomorrow, now. That means we should be weaning ourselves from our dependency on oil, not trying to expand it as fast a possible.”

Previous research also concluded that emissions must be slashed to zero to avoid a 2 C rise in global temperature by 2100 but Weaver said it is significant to have Environment Canada’s top climate team now come to same conclusion. Researchers say greenhouse gas emissions must be eliminated now to avoid future warming because the emissions build up and linger in the atmosphere for decades.

The Environment Canada team ran a sophisticated computer model for the study that will be used as part the next assessment report by the United Nations Intergovernmental Panel on Climate Change, which is due out in 2014.

The upgraded Earth system model takes into account carbon dioxide and other greenhouse gases, aerosols, land use change, and the flow of carbon between the atmosphere and the oceans and land surfaces. The model enables researchers to calculate the carbon dioxide emissions reductions required to meet different levels of global warming.

The Environment Canada study found that, even under the lowest emissions scenario analyzed, the global temperature increase would exceed “the 2 C warming target set to avoid dangerous climate change by the 2009 UN Copenhagen Accord.”

“The results of this study suggest that limiting warming to roughly 2 C by the end of this century is unlikely since it requires an immediate ramp down of emissions followed by ongoing carbon sequestration in the second half of this century,” says the report of the Environment Canada team led by Gregory Flato, manager of the Canadian Centre for Climate Modelling and Analysis in Victoria.

The American Geophysical Union, which published the study in the current issue of the Geophysical Research Letters, sent out a media release this week highlighting the Environment Canada report under the headline: “New study says 2 C warming may be unavoidable by 2100.”

Limiting warming to 2 C globally is widely seen as key to avoiding some of the far-reaching planetary impacts of climate change. It sounds like a modest increase but scientists say global warming of 2 C will see temperatures rise much higher in some regions — including the Arctic, which can expect to be 7 to 8 C hotter.

Warming of 2 C is expected to create an ice-free Arctic in the summer months, push up to one-third of all species to extinction and speed up melting of Greenland ice sheets, which could raise sea levels several metres over coming centuries.

“You don’t want to pass that threshold,” says Weaver.

He said he would like Canadians and their politicians to have a frank discussion about the climate realities facing the planet and the need to stop burning carbon-based fossil fuels. “We can’t wait around for this to be dealt with,” says Weaver. “We have to deal with it now.”